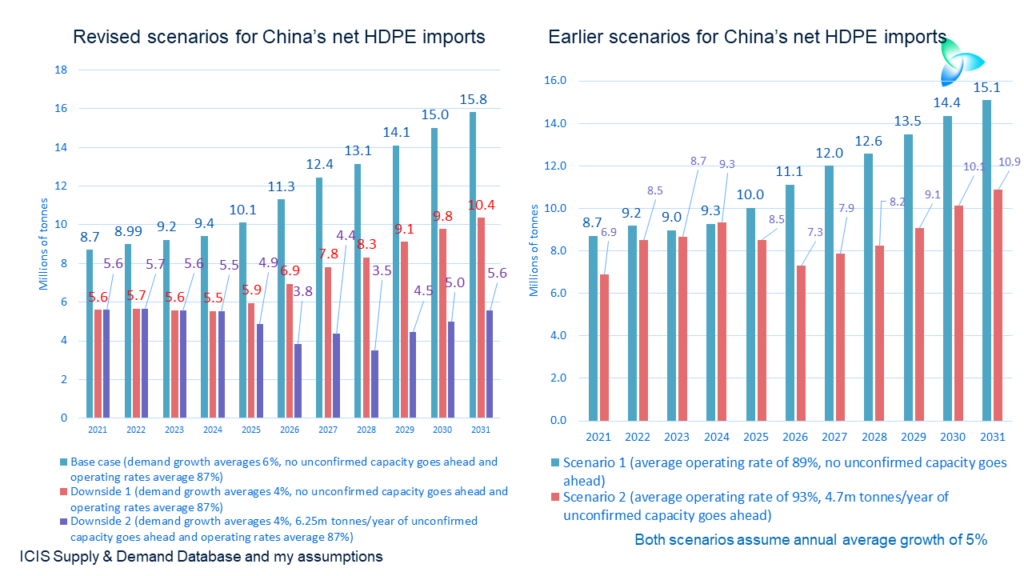 THE ABOVE chart on the  left might not happen, of course. China could remain a huge sink for high-density polyethylene (HDPE) exports up to 2031 and probably beyond that year.

The chart is an updated version of my estimates from earlier this year – the chart on the right, which I’ve included to make it easier to compare the changes in outlook.

But over the last few months, two things have changed to lead to an updated version, suggesting that net imports could fall to as little 5.6m tonnes in 2031 versus our revised base case of 15.8m tonnes:

I have kept to our base case forecasts for demand growth between 2022 and 2025 in both Downsides 1 and 2.

But the cumulative effects of just one year of disappointing China growth has big negative effects on net imports throughout the forecast period.

Note that in my new scenarios I’ve become considerably more conservative on operating rates than a few months ago.

I’ve kept operating rates unchanged from our base case under all three new scenarios at an average of 87%, reflecting the pressure of bringing a great deal of new capacity onstream.

The sensitivity of capacity utilisation being higher than 87% is big, very big. If say rates were above 90%, and all unconfirmed capacity went ahead, China would be close to entirely self-sufficient.

Or, as I discussed in April, China might choose another route to securing cost efficient supplies of HDPE and that could be through investing in Iranian projects that have been stalled by sanctions.

China, as part of a broader economic and geopolitical deal with Iran, plans to invest $280bn in Iranian oil, gas and petrochemicals.

If you examine all the stalled Iranian HDPE projects in the ICIS Supply & Demand Database and assume that they all go ahead with Chinese support, Iran could see its share of the Chinese import market eventually rising to 48% from the 2020 share of 15%.

Diversification to other markets is an essential hedge

As I said at the beginning, all might be right with the world as we know it. There is no question, in my view, that China’s HDPE demand growth will remain strong, setting aside what might be a disappointing 2021 relative to 2020.

Growth in 2022-2025 could easily surprise on the upside with new capacities also delayed or even cancelled. And the China/Iran deal may not lead to a major wave of new HDPE plants

But complacency is the enemy of a good sales strategy as this amazing chart below quite clearly tells us. Here, using our base case estimates of China’s net HDPE imports in 2021-2031 you can see how China will totally dominate the global picture. 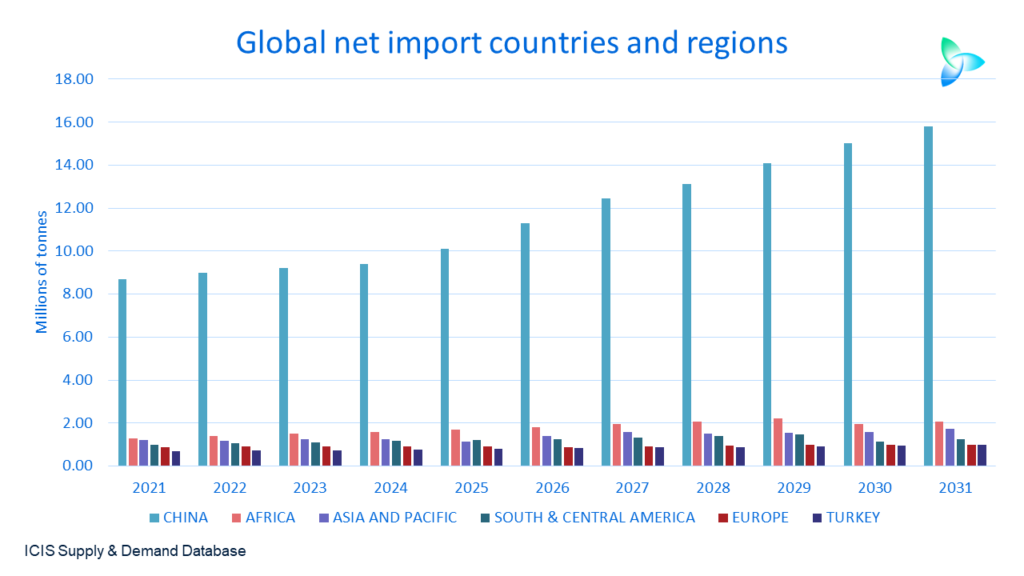 In percentage terms under our base case, China is forecast to comprise 66% of total net imports among the countries and regions that import more than they export between 2021 and 2031. In distant second place would be Africa at 10% with Asia and Pacific in third place at 8%.

Now let’s look at this same chart minus China to give you a clearer picture of the other countries and regions that you need to target. 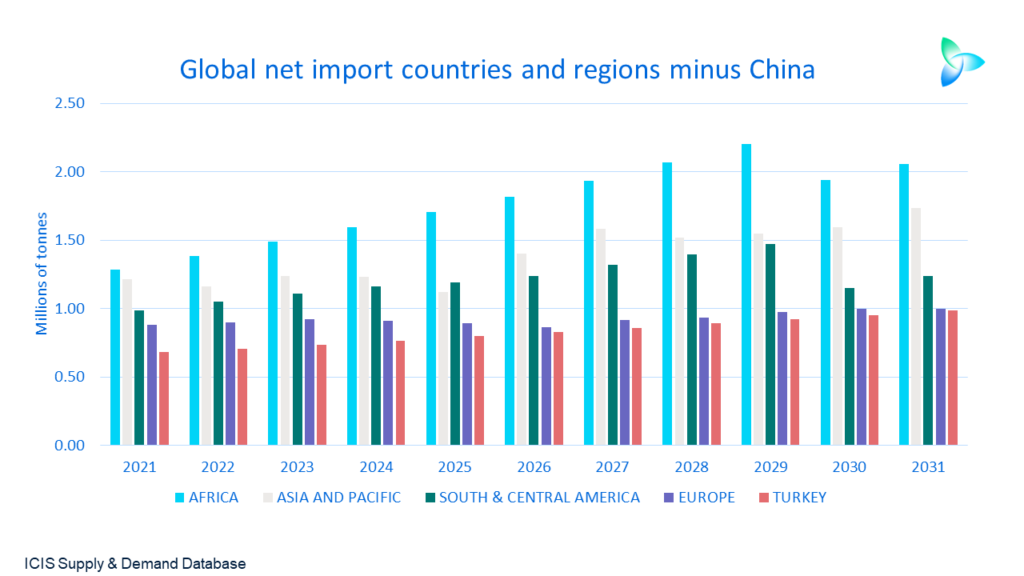 Now you can see the detail of the opportunities in Africa where net imports are forecast to climb from 1.3m in 2021 tonnes to 2m tonnes in 2023. Africa is of course a vastly more complex and divided market than China because of all its different countries.

Asia and Pacific net imports are forecast to edge up from 1.2m tonnes in 2021 to 1.7m tonnes in 2031. This is again a vastly more complex region than China with far greater logistics challenges.

Then come South & Central America, Europe and Turkey. Collectively, their net imports are expected to rise from 2.6m tonnes to 3.2m tonnes.

The global HDPE industry must prepare for the possibility that life will no longer be as easy as a sales strategy that essentially involves putting pellets on a ship and sending them to China, with the just about cast-iron guarantee that China will buy every spare molecule.