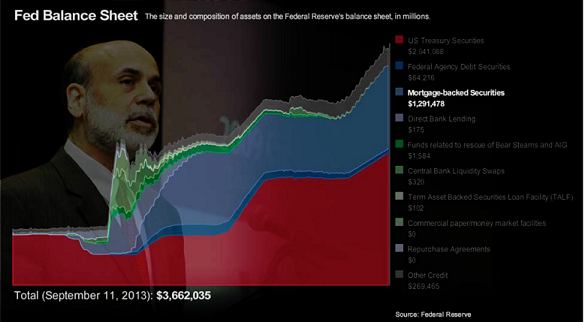 Over the years, the blog has been very critical of the quality of people appointed by the US Federal Reserve to undertake the actual trading involved in its ‘Quantitative Easing’ (QE) programmes:

As the chart above from the Wall Street Journal shows, the sums involved are enormous, having reached $3.66tn by mid-September, and expanding by $85bn each month.

Now it seems the blog was not alone.  Andrew Huszar was brought back to the Fed from Wall Street in spring 2009 to manage the job of buying $1.25tn of mortgage bonds in the next 12 months.  And this week, in an Opinion piece for the Wall Street Journal, he has confirmed the blog’s worst fears about the competence of the Fed’s activities in this critical area.  Thus he opens his article as follows:

“We went on a bond-buying spree that was supposed to help Main Street. Instead, it was a feast for Wall Street…. The central bank continues to spin QE as a tool for helping Main Street. But I’ve come to recognize the program for what it really is: the greatest backdoor Wall Street bailout of all time.”

Huszar then goes on to describe the total ineffectiveness of the QE programme as he saw it at first-hand:

“Trading for the first round of QE ended on March 31, 2010. The final results confirmed that, while there had been only trivial relief for Main Street, the U.S. central bank’s bond purchases had been an absolute coup for Wall Street. The banks hadn’t just benefited from the lower cost of making loans. They’d also enjoyed huge capital gains on the rising values of their securities holdings and fat commissions from brokering most of the Fed’s QE transactions. Wall Street had experienced its most profitable year ever in 2009, and 2010 was starting off in much the same way.

QE has been the wrong policy, appallingly executed.  Huszar concludes that at best, QE has generated “only a few percentage points of US growth”, and quotes PIMCO’s estimate that the overall impact may have been just $40bn.  Meanwhile, “0.2% of US banks now control more than 70% of US bank assets”, and “have seen their collective stock prices triple since March 2009”.  As a result, he headlines his article, “I’m Sorry, America”.

In addition, he makes the unarguable point that the Fed’s appearance of activity has allowed the politicians to duck their responsibility for resolving the problems of “a structurally unsound US economy”.  They have been able to avoid entering into debate about the impact of the ageing US population on economic growth, where one in three US adults are now in the New Old 55+ generation.

The Fed’s failed policies have also been followed outside the US, of course, with similar lack of results.  Thus in the real world, Dow Chemical announced this week that it:

“Will temporarily close its cracker at Tarragona in Spain from 1 December because of challenging market conditions and an unclear demand picture”.

The blog fears Dow’s news will be the first of several such announcements as we come to year-end.  This is hardly the sign of the strong recovery that was supposed to inevitably follow the Western central banks vast expenditure on their QE programmes.