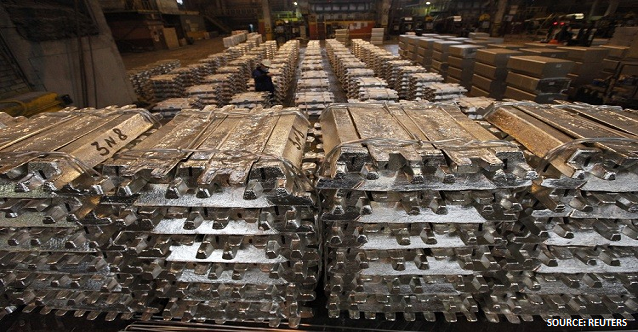 When was the last time you told your customers that they would have to wait 570 days for delivery of material for which they have already paid?

You’ve never done this?  Well, you need to take lessons from those super-smart people who own the aluminium warehouses, such as Goldman Sachs (pictured above by Reuters).  As the blog has noted before, they have created a situation where warehouse stocks now represent enough metal to build 2 years’ supply of cars.

Finally, however, the world’s largest buyer, Novelis, has gone public with its complaints to the Financial Times.  They argue that the shortage is “temporary and artificial”, and that the market remains in large surplus with 10m – 15m tonnes of metal stored in warehouses around the world.

They are also upset by a second tactic now common in the market.  If you want to obtain prompt material to use today, and you can’t obtain your own material from the warehouse until the end of 2015, you instead have to pay a “prompt premium”.  And this isn’t small change.  Last week, buyers were paying about $450/t in premium, 26% above the supposed ‘cash price’ at the London Metal Exchange.

“There is more than enough metal to meet the higher consumption levels, but it continues to be held off-market by those who benefit from financing deals and the appreciation in premiums. This increase in costs ultimately does flow down through the supply chain to the end consumer.”

Aluminium is thus another market, like crude oil, where the market is completely failing in its primary role of price discovery.  There have been no shortages in either market since 2009 to justify today’s high prices.  And the short-sighted greed of those creating these high prices is clearly having major negative effects on those of us who live in the real world:

This moment may now be approaching quite quickly.  Demand for new cars has begun falling in major markets, as the blog discussed yesterday.  And this could well be the trigger for a price collapse, if it continues.

In the meantime, the moral of the aluminium story is clear.  As in virtually every area impacted by the Crisis, most regulators and policymakers have let down the people they were supposed to protect.