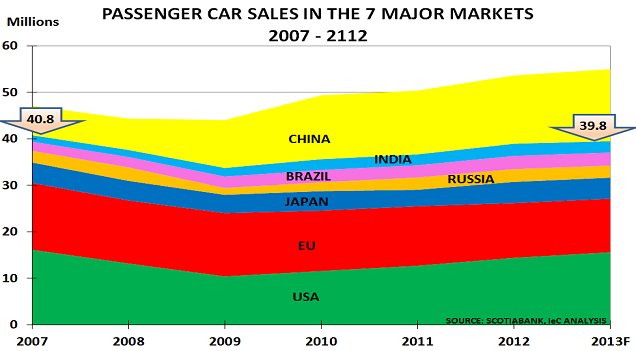 Autos remain the world’s largest manufacturing industry, and the single biggest source of demand for chemicals and plastics.  According to detailed analysis by the American Chemistry Council, each new US auto is worth $3,539 in terms of sales – and involves a wide range of products including antifreeze, plastic dashboards, bumpers and windows, as well as upholstery fibres, tyres and coatings.

So the chart above, which summarises sales in the world’s 7 largest markets since 2007, is cause for concern.  These markets account for over 80% of all auto sales:

Equally of concern is the detailed picture:

So a lot depends on China to power future growth.  This, however, looks most unlikely to happen, for reasons discussed in the blog’s detailed analysis last week.  The new leadership are already cutting back lending in the shadow banking sector, which has been the main source of finance for auto sales.

Supporting evidence for this analysis comes from developments in those countries who had been major suppliers of raw materials to China.  Brazil and others have all seen their economies go into reverse as China cools.

Equally, the blog is quite doubtful about the bullish forecasts for US sales this year.  It continues to believe these have been largely driven by financing deals – which made new cars more attractive than used cars.  Only 42m used cars were sold in 2013, as the average price has risen 18% since 2007, due to relatively few new cars being sold in 2008-11.  But now more cars are now coming on the market, and dealers expect prices to fall again.

Globally, analysts WardsAuto also report that manufacturers’ inventory in the major markets in December was 9% higher than in 2012 in both the US and Asia-Pacific, and 4% higher in Europe.

Of course, policymakers’ optimism over a sustained recovery may still turn out to be well-founded.  But behind the hype, the detail of current auto industry performance suggests that any company without a Plan B risks finding themselves in a difficult position by the middle of the year.