London’s house market has been slowing for some time, as I noted last year.  The issue is affordability.  Artificially low interest rates make the monthly payment seem cheap.  But the key question is whether your salary will allow you to repay the capital borrowed over time.

Sadly, this has become increasingly impossible for many actual and potential buyers, due to the Bank of England’s increasing use of stimulus policies since 2000.

The chart shows house prices on the left, and the ratio to earnings on the right. (Prices are adjusted for inflation since 1971, to enable long-term comparison):

  Prices used to fluctuate between ratios to earnings of 3x to 6x
  The market would bottom when prices were around 3x average earnings, and peak at around 6x earnings

But after the dotcom crash in 2000, the Bank deliberately allowed prices to move out of line with earnings  As the Governor, Eddie George, later told the UK Parliament in March 2007:

“When we were in an environment of global economic weakness at the beginning of the decade, it meant that external demand was declining… One had only two alternatives in sustaining demand and keeping the economy moving forward: one was public spending and the other was consumption….

“We knew that we had pushed consumption up to levels that could not possibly be sustained in the medium and longer term.  But for the time being if we had not done that the UK economy would have gone into recession, just like the economies of the United States, Germany and other major industrial countries. That pushed up house prices and increased household debt. That problem has been a legacy to my successors; they have to sort it out.”

Of course, as the chart shows, George’s successors did the very opposite.  Ignoring the fact that a bubble was already underway, they instead reduced interest rates to near-zero after the subprime crisis of 2008, and flooded the market with liquidity.  Naturally enough, prices then took off into the stratosphere.

Back in January 2015, I suggested in an interview with the UK’s Moneyweek magazine that:

“We’ve seen price falls in the housing market in the past in the early 1990s and they went down 50% in real terms, and I think that we’re at the start of that kind of decline now …it’s just something we have to go through to get to reality.”

The problem, of course, is that a bubble of this size, deliberately encouraged by a major central bank over more than a decade, does not just unwind of its own accord.  It needs an external catalyst.  And as I suggested at the end of June, the Brexit vote seems to have become such a catalyst:

  The interest rate rises that Brexit has already caused have now led major lenders to increase their mortgage rates
  Buy-to-let sales, which were the main force behind the ascent to such dizzying heights, have fallen by over 50%
  A further hit is on the way, as Airbnb has agreed to limit landlords’ London lettings to no more than 90 days/year
  Transaction volumes (usually a good leading indicator for prices) have also plunged from 15 to just 9 per surveyor

Prices have not yet started to fall on a widespread basis, but the top end of the market is already seeing falls of up to 40%, as a leading broker told Bloomberg last week:

With prices now collapsing at the top end, it is likely that prices further down the scale will soon start to be impacted.

This is, of course, unlikely to happen overnight.  As in the past, it will take years for the full collapse to take place. The reason is that buyers tend to disappear when prices start to fall and interest rates start rising.  Anyone owning a home may therefore have to wait a long time until a buyer appears – even if the price has been greatly reduced.

This will be a disaster for many buyers, who believed the assurances of the experts that prices would always rise, due to London having now become a “global city”.  First-time buyers will be badly hit, as they have less equity in their homes, and will discover they have bought at prices which were up to double normal price/earnings ratios:

  They probably never knew that Nationwide data showed first-time buyer ratios in London were as low as 3.7 in 1983
  Nor did they know that ratios fell to 2.6x earnings at the bottom of the last major downturn in 1995/6
  Instead, they were encouraged to buy at ratios ranging from 6.2x in 2010 up to this year’s peak of 10.4x

Plenty of people are already angry about the housing market, due to rents having soared due to the bubble that has been created.  I fear this anger will seem like a child’s tantrum, however, if prices do now start to fall back to their normal ratios to earnings.

Midway Atoll becomes "plastic island" due to our throwaway society

Plastics have made an enormous contribution to improving our quality of life ove...

OPEC is living in the past with its recent announcement of new quotas. The simpl... 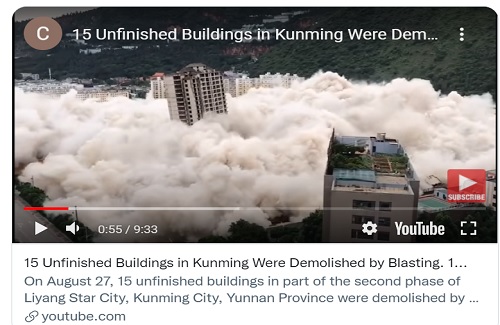