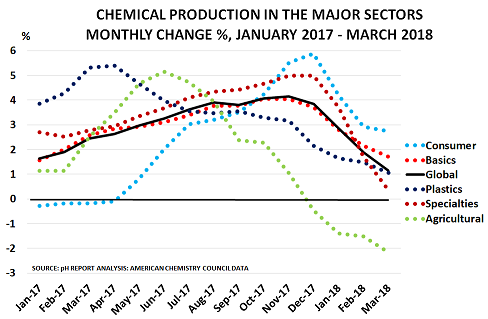 Chemicals are easily the best leading indicator for the global economy.  And if the global economy was really in recovery mode, as policymakers believe, then the chemical industry would be the first to know – because of its early position in the value chain. Instead, it has a different message as the chart confirms:

As the ACC note:

“The global chemical industry ended the first quarter on a soft note.  Global chemicals production fell 0.3% in March after a 1.0% drop in February, and a 0.6% decline in January. The last gain was 0.3% in December.”

This, of course, is the opposite of consensus thinking at New Year, when most commentators were confident that a “synchronised global recovery” was underway. It is therefore becoming more and more likely, as I warned in January, that policymakers have been fooled once again by the activities of the hedge funds in boosting “apparent demand”:

“For the last 6 months, everyone who buys oil or other commodity-related products has been busy building as much inventory as they could afford. In turn, of course, this has made it appear that demand has suddenly begun to recover. At last, it seems, the “synchronised global recovery” has arrived.

“Except, of course, that it hasn’t. The hedge funds didn’t buy 15 days-worth of oil to use it. They bought it to speculate, with the OPEC-Russia deal providing the essential “story” to support their buying binge.”

This downturn is worrying not only because it contradicts policymakers’ hopes, but also because Q1 volumes should be seasonally strong:

HIGHER OIL AND COMMODITY PRICES ARE CAUSING DEMAND DESTRUCTION
The problem is that most central bankers and economists don’t live in the real world, where purchasing managers and sales people have bonuses to achieve.  As one professor told me in January:

“Economists would tend to be skeptical about concepts such as “apparent demand”. Unless this a secret concept (and it doesn’t seem like it is), other investors should also use it, and then the oil price should already reflect it. Thus, there wouldn’t be gains to be made (unless you’re quicker than everyone else or have inside information)…”

But in the real world, H2’s inventory build has now been replaced by destocking – whilst today’s higher oil prices are also causing demand destruction.  We have seen this many times before when prices have risen sharply: 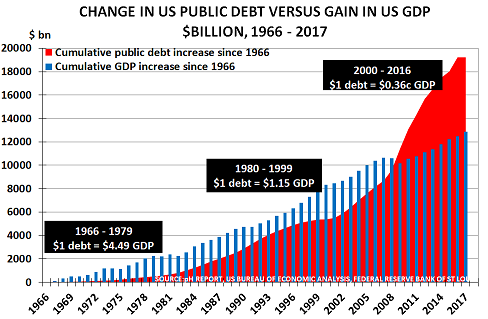 New data from the US Federal Reserve Bank of St Louis also highlights the headwinds for demand created by the debt build-up that I discussed last week.  As the chart shows:

In other words, value destruction has been taking place since 2000.  The red shading tells the story very clearly, showing how public debt has risen out of control as the Fed’s stimulus programmes have multiplied – first with sub-prime until 2008, and since then with money-printing.

RISING INTEREST RATES CREATE FURTHER RISKS
Last week saw the yield on the benchmark US 10-year Treasury Bond reach 3%, double its low in June 2016.  It has risen sharply since breaking out of its 30-year downtrend in January, and is heading towards my forecast level of 4%.

Higher interest rates will further slow demand, particularly in key sectors such as housing and autos.  And in combination with high oil and commodity prices, it will be no surprise if the global economy moves into recession.

Chemicals is providing the vital early warning of the risks ahead.  But as usual, it seems policymakers prefer to wear their rose-coloured spectacles.  And then, of course, as with subprime, they will all loudly declare “Nobody could have seen this coming”.

PREVIOUS POST The tide of global debt has peaked: 8 charts suggest what may happen next, as the tide retreats
NEXT POST Apple, Xiaomi squeeze smartphone mid-market as sales plateau