Airbus warns of “dawning reality” there may be no Brexit deal

Suddenly, businesses across Europe are waking up to the realisation that the UK is currently on course to leave the European Union (EU) on 29 March next year, without a deal on trade and customs.  As Katherine Bennett, the UK boss of aerospace giant, Airbus, warned on Friday:

“This is not project fear, this is dawning reality.”

As the BBC reported on Friday: “Airbus has warned it could leave the UK if it exits the European Union single market and customs union without a transition deal…It also said the current planned transition period, due to end in December 2020, was too short for it to make changes to its supply chain.  As a result, it would “refrain from extending” its UK supplier base. It said it currently had more than 4,000 suppliers in the UK.”

BMW, which makes the iconic Mini and Rolls Royce, added:

“Clarity is needed by the end of the summer.”

“The government is relatively paralysed … it is not good for the country.”

This is why my IeC colleagues and I have now launched Ready for Brexit on the 2nd anniversary of the UK’s referendum to leave the EU.  We are particularly concerned that many small and medium-sized businesses (SMEs) – the backbone of the European economy – are failing to plan ahead for Brexit’s potential impact.

As our Brexit Directory above shows, Brexit creates a wide range of challenges and opportunities:

And yet, today, nobody knows on what terms the UK might be trading with the other EU 27 countries after 29 March.  Or indeed, all the other countries where UK trade is currently ruled by EU agreements.

The EU is a rules-based organisation, and the legal position is very clear:

Ready for Brexit will keep its subscribers updated on developments as they occur, as well as providing news and insight on key areas of business concern. 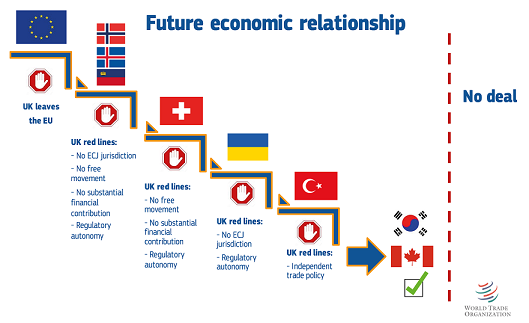 The UK has been in the EU for 45 years.  Unsurprisingly, as the slide above confirms, the negotiations are proving extremely complex.  Both sides have their own objectives and “red lines”, and compromise is proving difficult.

The negotiators not only have to deal with all the trade issues covered in the Ready for Brexit Directory, but also critical political questions such as the trading relationship between N Ireland and Ireland after Brexit.  That, in turn, is complicated by the fact that the UK government depends on Democratic Unionist Party (DUP) votes for its majority, and the DUP is opposed to any “special deal” on customs for the Irish border.

BUSINESSES NEED TO RECOGNISE THERE MAY BE “NO DEAL” AFTER 29 MARCH
I have taken part in trade negotiations, and negotiated major contracts around the world.  So I entirely understand why Brexit secretary David Davis has insisted:

“The best option is leaving with a good deal but you’ve got to be able to walk away from the table.”

“The prime minister has always said no deal is better than a bad deal. It is essential as we enter the next phase of the negotiations that the EU understands that and believes it… I think our negotiating partners would not be wise if they thought our PM was bluffing.”

The issue is simply that many businesses, and particularly SMEs, have so far ignored all these warnings.

According to a poll on the Ready for Brexit website, only a quarter have so far begun to plan for Brexit.  Half are thinking about it, and almost a quarter don’t believe it is necessary.  This is why we have produced our easy-to-use Brexlist™ checklist, highlighting key areas for focus.

Instead, the UK would then simply leave the EU in 278 days time on World Trade Organisation terms.

If you don’t know what WTO terms would mean for your business, you might want to visit Ready for Brexit and begin to use its Brexlist checklist *.

*  Ready for Brexit offers users a free one-month trial including access to the Brexlist. After this there is an annual fee of £195 to access the platform.  Discounts are available for companies who want to help SMEs in their supply chains to prepare for Brexit, and for trade associations who would like to offer the service to their members.