Time to recognise the economic impact of ageing populations 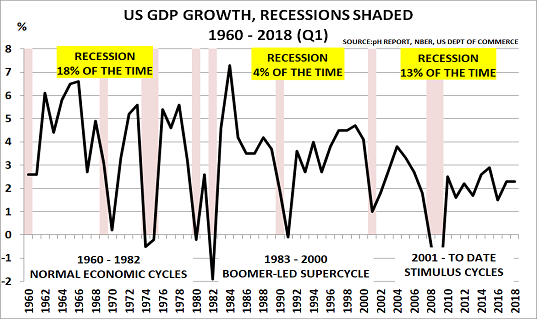 Is global economic growth really controlled by monetary policy and interest rates?  Can you create constant growth simply by adjusting government tax and spending policy?  Do we know enough about how the economy operates to be able to do this?  Or has something more fundamental been at work in recent decades, to create the extraordinary growth that we have seen until recently?

Why was this?  Was it because we became much cleverer and suddenly able to “do away with boom and bust” as one UK Finance Minister claimed?  Was it luck, that nothing much happened to upset the global economy?  Was it because the Chairman of the US Federal Reserve from 1986 – 2006, Alan Greenspan, was a towering genius?  Perhaps. 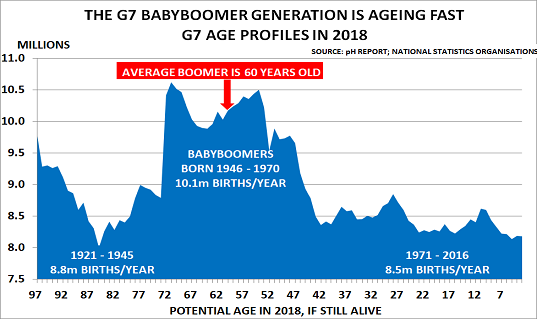 Or was it because of the massive demographic change that took place in the Western world after World War 2, shown in the second chart?

Babies, as we all know, are important for many reasons.

Economically, these babies were born in the wealthy developed countries, responsible for 60% of global GDP.  So right from their birth, they were set to have an outsize impact on the economy:

BOOMERS TURBOCHARGED GROWTH, BUT ARE NOW JOINING THE LOWER-SPENDING 55-PLUS COHORT 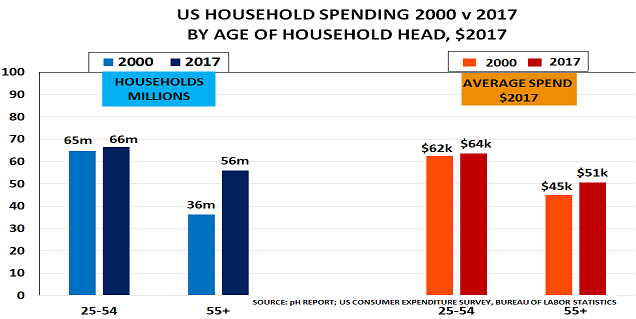 The key development was the arrival of the Boomers in the Wealth Creator 25-54 age group that drives economic growth.  Consumer spending is 60% – 70% of GDP in most developed economies.  And so both supply and demand began to increase exponentially.  In fact, the Boomers actually turbocharged supply and demand.

Breaking with all historical patterns, women stopped having large numbers of children and instead often returned to the workforce after having 1 or 2 children.  US fertility rates, for example, fell from 3.3 babies/woman in 1950 to just 2.0/babies/women in 1970 – below replacement level.    On average, US women have just 1.9 babies today.

It is hard to imagine today the extraordinary change that this created:

This turbocharged the economy by creating the phenomenon of the two-income family for the first time in history.

CONCLUSION – THE CHOICE BETWEEN ‘DEBT JUBILEES’ AND DISORDERLY DEFAULT IS COMING CLOSE
Policymakers ignored the growing “demographic deficit” as growth slowed after 2000.  But their stimulus policies were instead essentially trying to achieve the impossible, by “printing babies”.  The result has been today’s record levels of global debt, as each new round of stimulus and tax cuts failed to recreate the Boomer-led economic SuperCycle.

As I warned back in January 2016 using the words of the OECD’s William White:

That recession is now coming close.  There is very little time left to recognise the impact of demographic changes, and to adopt policies that will minimise the risk of disorderly global defaults.