Rising life expectancy, and falling fertility rates, mean that a third of the Western population is now in the low spending 55-plus age group.  Given that consumer spending is around two-thirds of the economy in developed countries, the above charts provide critically important information on the prospects for economic growth.

They show official data for household spending in 3 of the major G7 economies in 2017 – the USA, Japan and the UK:

The data confirms the common sense conclusion that youthful populations create a potential demographic dividend in terms of economic growth.  Conversely, ageing populations have a demographic deficit and will see lower growth, as.older people already own most of what they need, and their incomes go down as they enter retirement. 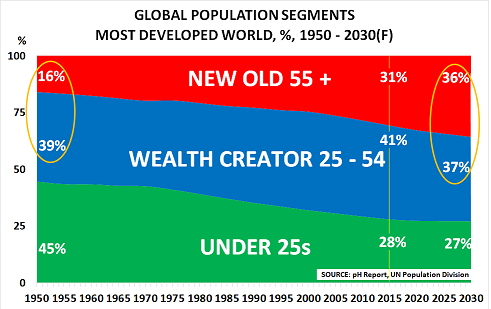 The Western world has been, and still is, a classic case study for this demographic effect in action, as the second chart shows:

The Boomers were the largest and wealthiest generation that the world has ever seen, and as they joined the workforce they created an economic Super-Cycle. This was turbo-charged by the fact that, for the first time in history, Western women began to re-enter the workforce after childbirth:

But since 2001, the oldest Boomer, born in 1946, has been leaving the Wealth Creator age group.  By 2013, the average Boomer had left it.  And since 1970, Western fertility rates have been below replacement levels (2.1 babies/woman).  So the Western economy now faces a double squeeze: 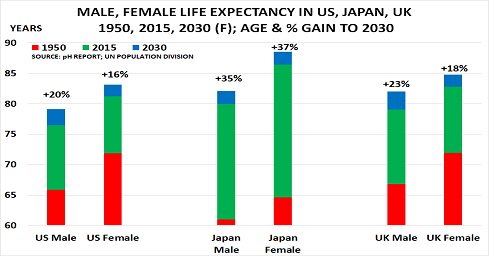 In the past, very few Boomers would have lived beyond retirement age, as the 3rd chart confirms based on UN Population Division data.  So, sadly, they would have been irrelevant in terms of economic growth.  But, wonderfully, this is no longer true today:

By 2030, 36% of the Western population will be New Olders, almost equal to the 37% who are Wealth Creators.

Clearly there is no going back to SuperCycle growth levels.  I will look at this critical issue in more detail next week.

As promised last week, today’s post looks at the impact of the ageing of ...