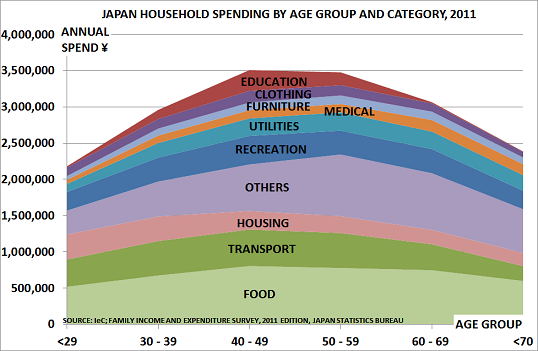 Stock market investors in Japan are feeling very pleased. The Nikkei share index has risen 40% since new premier Abe was elected last year. And now the new governor of the Bank of Japan has confirmed he plans to wave a magic wand to restore economic growth and create inflation.

He is not bothered that all previous such attempts over the past 20 years have failed miserably. This time he plans to buy government bonds worth 1% of GDP each month for the next 2 years. He believes this will “guarantee” inflation will now rise to 2%. Of course, he could have simply decided to hand out yen notes from the back of a Toyota, but this might have looked stupid.

Unfortunately, however, this bold new initiative is also doomed to fail, for one simple reason. As in all developed economies, household consumption accounts for almost 2/3rds of Japan’s GDP. And Japan not only has the the oldest population in the world (median age is 45 years). Nearly half of its population are over 50 and so are already in their low-spending years.

Household consumption and GDP will thus continue to fall. Older Japanese already have most of what they need, and so mainly buy replacement products. Equally, their incomes decline as they retire. As the chart shows, based on official Statistics Bureau data, Japanese households sharply reduce their total spending after the age of 50 years. The only exceptions are:

Former Governor of the Bank of Japan, Masaki Shirakawa, was thus entirely right to warn against increasing debt levels in a vain attempt to restart growth.

Instead of ‘solving’ the problem, Abe is simply creating new ones. Western economies such as Japan’s have gone ex-growth because of their ageing populations. Therefore the Bank’s new borrowing will simply be an added burden on the younger members of the population. They will be left to pay off the bill and will have a lower standard of living as a result.

We should instead be celebrating the fact that advances such as the chlorination of drinking water have enabled life expectancy to double over the past 100 years. Given their age profile, a majority of Japan’s voters would certainly share this view, if the government explained the true facts to them. They, after all, would mostly have been dead a century ago.