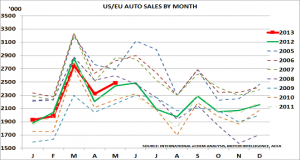 Central bank policymakers and financial analysts are seemingly convinced that the US economy is already seeing a strong recovery, whilst Europe is just about to resume growth.  But evidence from the auto market, the largest manufacturing industry, gives a much more mixed outlook.

The chart above shows combined sales in these two major Western markets to May:

The problem is that the optimists simply ignore the most critical factor – the ageing of the Western populations.  Older people drive less, as the kids have left home and they move into retirement.  They also have less money to spend.  Whilst younger people no longer see owning a car as an essential part of growing up.  As the Public Interest Group notes:

“Under any reasonable scenario, the number of miles driven annually will be far fewer in the future than if Baby Boom trends had continued”.

The trends are very consistent on both sides of the Atlantic.  As the Wall Street Journal notes, US manufacturers are now having to offer major incentives to move cars out of their showroom.  Dealers are routinely selling cars at a loss at the end of the month in order to meet bonus targets.  And loans are available to consumers with marginal credit.

Europe is simply further down this path.  Manufacturers’ organisation ACEA note that May’s sales were the lowest since 1993.  Previously strong markets such as Germany and France were down 10% versus 2012, whilst weak markets such as Italy and Spain continued to decline.  Only the UK showed growth, thanks to bank compensation payments.

In a further sign of the changes underway, leading German automakers are moving into related markets, such as renting and the used car market.  Their aim is simply to replace lost growth in new car sales.  In recent months, BMW, Mercedes and Volkswagen have all begun to sell used cars very aggressively.  With 6.9m sales, this was twice the size of the German new market in 2012.

Another growing problem for western producers is China’s continuing crack-down on corruption.  This has already reduced sales growth for luxury cars to just 4%/year, compared to 36%/year in the past.  By year-end, growth rates will probably be negative.  Yet these sales are the ones with highest profit margins.

After 5 years, as Pimco noted, it really is time that policymakers admitted their policies have failed to deliver the promised strong recovery.  Hope is a good thing, but their wishful thinking creates enormous risks for the rest of us.