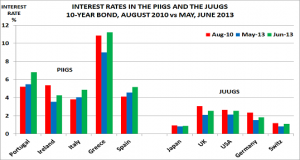 The past week has seen major increases in global interest rates.  This would be good news if it was due to a strong global economic recovery.  But it isn’t.  Yesterday, Q1 US GDP growth was revised down to 1.8%, for example.  Instead, it seems to reflect investors’ fear that central banks may be losing control of the market.

The chart highlights the change that has taken place, using the concept of the JUUGS (Japan, US, UK, Germany, Switzerland) versus the PIIGS (Portugal, Ireland, Italy, Greece, Spain):

But now investors are starting to worry that central bank bond buying via their $10tn liquidity programmes has pushed the JUUGS into a more risky position.  Their rates today (green) are higher  – for the first time since August 2010.

Clearly we don’t know what will happen next.  Investors may decide their fears were over-stated.  But they may decide to worry that China may begin to sell its $1.2tn holding of US Treasury bonds and $450bn of US housing agency bonds?  Or Japan its $1.1tn of Treasury bonds?:

Central banks have gambled huge amounts of money on the risky and unlikely proposition that they can kick-start growth.  They preferred to ignore the obvious fact that ageing populations cause growth to slow or go negative.  Current interest rate moves highlight that this risk is now becoming more obvious, and on a wider scale.

8 July update.  Blog readers read it here first.  Official data today shows Japanese investors were selling $29bn of foreign debt in June, as this post was being published.  This was a record amount according to the Ministry of Finance

This week is the blog’s 6th birthday.  Remarkably, its audience remains e...