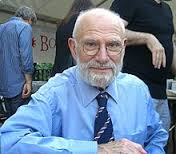 Oliver Sacks, the neurologist and writer, is 80 years old today.

His book ‘Awakenings’, which recounted the lives of victims of New York’s encephalitis lethargica epidemic in the 1920s, was made into an Academy Award-nominated movie in 1990, starring Robin Williams and Robert de Niro.

He argues (in an article for the New York Times) that we should learn to celebrate the insights we can gain from increased life expectancy:

“One has had a long experience of life, not only one’s own life, but others’, too. One has seen triumphs and tragedies, booms and busts, revolutions and wars, great achievements and deep ambiguities, too. One has seen grand theories rise, only to be toppled by stubborn facts. One is more conscious of transience and, perhaps, of beauty.

“At 80, one can take a long view and have a vivid, lived sense of history not possible at an earlier age. I can imagine, feel in my bones, what a century is like, which I could not do when I was 40 or 60.

“I do not think of old age as an ever grimmer time that one must somehow endure and make the best of, but as a time of leisure and freedom, freed from the factitious urgencies of earlier days, free to explore whatever I wish, and to bind the thoughts and feelings of a lifetime together.”