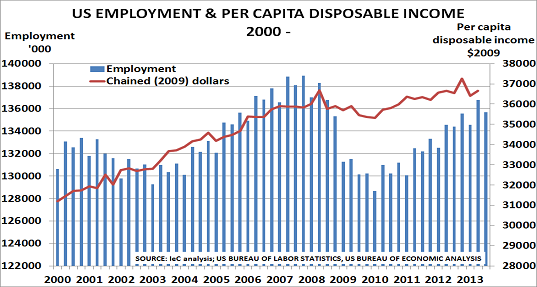 June has typically been the seasonal peak for US employment.  July’s data continued this trend, as the chart shows:

It is still too soon to be sure about the impact of the automatic spending cuts due to the sequester, which began in March.  But it seems government departments have so far focused on forcing employees to take unpaid leave.  This maintains the employment numbers and means, for example, that the Department of Defence has told 650k employees to take one day off a week until September, when its budget year ends.  But without Congressional agreement to replace the sequester and to raise the debt ceiling, job losses may eventually become inevitable.

Meanwhile, more than half of the new jobs being created are in low-wage industries such as restaurants and retail.  Thus they are not always very attractive to the 6.6m people who are actively looking for work.  So even though the jobless rate fell to 7.4%, this was not necessarily a sign of a strong economy.

Typical of those being hit is Morris Cornley, a former soldier and 57-year-old great grandfather from Kansas.  As the Wall Street Journal reports, he lost his job as a truck driver two years ago at the age of 55, and for the past year has been working as a delivery driver for a sandwich chain alongside his 21-year-old granddaughter.  He earns just $7.35/hour, and told the Journal, “its not like I’m not looking for other work. Its just that there’s not any other work out there for me.”

Equally, job creation in the key Wealth Creator 25 – 54 cohort remains relatively weak, and is still below the pre-Crisis peak.  As an analysis by the New York Times notes:

“The percentage of prime-age Americans with jobs fell sharply during the 2007-9 downturn. It did not budge from 2009 through mid-2011, before rising somewhat in late 2011. In the last year and a half, it has not risen much further.

“The fairest conclusion seems to be that the economy really is weaker than the declining unemployment rate suggests.”