Lessons from Grangemouth – how Europe can revive its industrial base 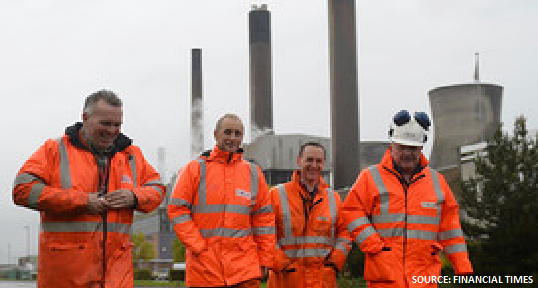 Sometimes a crisis can concentrate minds on one key issue.  This was certainly the case last week, when the blog was part of the tense debate over the future of the INEOS petrochemical plant at Grangemouth, Scotland involving the UK and Scottish governments, INEOS and the UNITE union.  The experience highlighted some critical learnings for the future of European petrochemical and energy production.

Remarkably, this second point was clearly not well understood by many of the key stakeholders outside the industry.  One BBC Radio interviewer was thus clearly amazed to discover that the initial closure of the plant had already led to one small company having to find storage space for £17k of tools, being returned by redundant contractors.  This is a clear lesson for all of us – large numbers such as millions and billions pass over the heads of most normal people, as these have no meaning for them.  It is only the local detail that matters.

This leads to a second point.  Most ordinary people, like government officials, have no idea about the key uses of petchem products in today’s economy.  The names we use such as polyethylene and polypropylene also have no meaning for them.  Thus one leading national media journalist began his conversation with the question, ‘Does this closure really matter for the UK?’  He only really became interested when told the plants made £5bn of products designed to protect food safety (packaging) and vehicle safety (car bumpers) etc.

A key learning for the future is therefore that the industry must get a lot better at explaining what it does, and why it matters.  It is not surprising that it is losing the debate over fracking, for example.  Almost nobody in Europe understands why this might be a good and useful thing to do.  Most people instead imagine that energy is something that just arrives via a switch in their home or via a pump at the service station.  The linkage between exploration for oil/gas, and their survival and comfort has not registered with them.

Another learning follows from this.  Most employees today don’t really understand the link between profitability and employment.  They came to assume during the SuperCycle that there was always lots of money around, and jobs would always be available.  It took until Wednesday morning for this cosy belief to be shattered at Grangemouth, when INEOS announced the closure of the plant.  Until then, workers had thought the ballot decision was simply a lever for getting a better offer.  Suddenly, this dream was broken, and reality broke through.

Grangemouth thus shows that it is possible to explain that petchems are crucial to the modern economy, and that well-paid jobs, like energy supplies, do not simply grow on trees.  It also shows that people can grasp these critical issues very quickly when they are explained in their terms.  Thus the Grangemouth story has important implications for the broader issue of how Europe can start to revive its industrial base. As the BBC summary confirmed:

“Perhaps the main lesson to learn from this is the need to think and plan ahead….For 49 hours between Wednesday and Friday, the threat to Grangemouth prompted Scotland to face up to a future without the business of producing and processing hydrocarbons.  This has taught us a lot about the refining and chemicals industry, just one facet being the threat facing Europe from efficient competition in other parts of the world.”

The experience also confirms the blog’s own long-stated belief that the New Normal is not just an interesting discussion topic, but will create winners and losers.  Companies and individuals need to spend time now to understand what it will mean for them, in detail.  Otherwise they risk replicating the traumatic events seen at Grangemouth last week.  And next time, there might not be the happy ending pictured above.

Something very important seems to be happening in China’s polyester̵...

It was only a “mini-stimulus” that was delivered by China’s ne...