The Financial Times has carried an excellent analysis this week of the key shale gas issues facing the European chemical industry.  It includes comments from a number of CEOs, as well as from the blog.  Its key points are as follows: 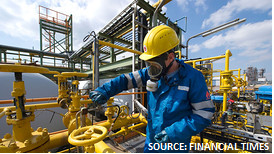 THE STRATEGIC DILEMMA
“European petrochemical makers risk being squeezed between low-cost producers in the Middle East and a resurgent chemicals industry in the US, where feedstock and energy prices have plummeted following shale gas discoveries.
“After a decade of almost zero capacity expansion in US petrochemicals, shale gas has prompted the likes of Dow Chemical, LyondellBasell, Chevron Phillips and ExxonMobil Chemical to invest billions of dollars in ethane cracker capacity on the US Gulf Coast.
“Fresh US supplies of petrochemicals – primarily ethylene derivatives such as polyethylene and PVC – will hit global export markets in coming years. Meanwhile, Middle Eastern chemical companies that have long had a big feedstock and energy cost advantage over Europe may struggle to export to a more competitive US and seek European customers instead….
“Bernstein Research estimates that the combination of high oil prices and cheap gas has boosted the profits of US chemical companies running ethane crackers by an annual $6bn, or roughly 14 per cent of the entire US industry’s profits in 2011.”
Paul Hodges, chairman of industry consultancy International eChem, says there is “a real fight to the death going on in core [petrochemical] export markets such as PVC between US and European producers”.  “US producers have grasped they have a cost advantage, and being good Americans they are running as hard as possible with it.”
COMPANY RESPONSES
“Belgian-based Solvay is dealing with US competition and weak demand in Europe’s polyvinyl chloride (PVC) market by folding its PVC assets into a joint venture with those of rival Ineos. Solvay plans to exit the agreement in a few years.  Jean-Pierre Clamadieu, Solvay chief executive, said the move partly reflected the “competition coming, especially from North American producers, which are benefiting from very privileged access to energy and raw material.”

“Germany’s Lanxess is set to cut 1,000 jobs by the end of 2015 in response to a fall in demand for synthetic rubber from the automotive industry. About 40 per cent of the company’s sales are linked to the automotive and tyre industries.  “Lanxess is suffering at the moment from the temporary market weakness in tyres and more broadly in automotive,” Axel Heitmann, chief executive, tells the FT. “We’re focused more than ever on technology and innovation because high-end products are less cyclical and less affected by pricing pressure.”

Kurt Bock, chief executive of Germany’s BASF, believes the world’s biggest chemical maker by sales will remain competitive in spite of shale developments as it has largely exited ethylene-based chemicals.  Still, European chemical producers know they cannot ignore developments in the US and all insist Europe must do something about its competitive position in energy or risk investments going elsewhere.

“Energy costs can account for more than half of the production costs of chemical companies. Ineos’ ChlorVinyls plant in Runcorn, for example, uses as much power as the neighbouring city of Liverpool.

IS THE US FEEDSTOCK ADVANTAGE LONGTERM?
“Environmental concerns and greater population density have so far prevented Europe developing its own shale gas reserves, which threatens to leave European chemical producers at a competitive disadvantage in the near term. Natural gas prices in the US are roughly a third of the Europe price.

“Moreover the jury is still out on whether the huge expansion of US chemical production will pay dividends in the long term.  “My outlook for European chemical industry is not terribly depressed as I don’t believe there is any sound fundamental reason for the divergence between natural gas and crude oil prices,” Mr Hodges, the consultant, said.  “The US is adding 10m tonnes of export-orientated ethylene capacity . . . But who are they going to export it to? I believe they are doomed to fail as there is no market for it.”