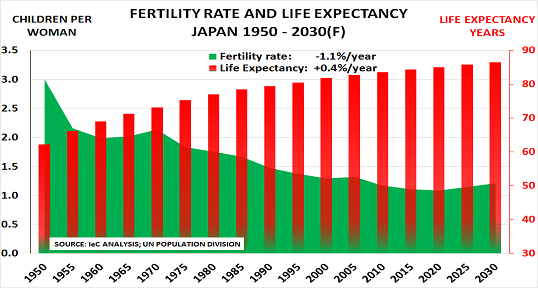 The blog’s new series on the likely demographic impact on the world’s Top 5 economies today moves across NEA to focus on Japan – the world’s 3rd largest economy ($6tn).   As the chart shows:

Japan now shares with Germany the distinction of having the oldest population in the world, with a median age of 46 years.  This is even more remarkable when one remembers that Japan’s life expectancy was just 44 years only a century ago.

Data from the new OECD Pension Book highlights the key issue that arises from this:

The drop in average income on retirement is stark.  The full pension is paid from 65 and is just 16% of average income after 40 years employment.  A second earnings-related pension is also available in different forms, adjusted for earnings and contribution period.  Thus the OECD calculates combined pension income totals an average of 33% of median earnings.

Clearly this drop in income on retirement makes it impossible for Japan to replicate the growth seen in its earlier ‘economic miracle’, when the population was young.  Household spending is, after all, nearly two-thirds of its GDP.  Equally, it is no surprise that Japan has seen more or less permanent deflation since 1990 as demand continues to weaken.

Only one recent Bank of Japan governor has had the courage to state the obvious conclusion.  Masaaki Shirakawa was governor until last year and argued that Japan’s “low growth was mainly attributable to demographics, or more specifically, a rapid aging of the population”.  He went on to suggest:

“The implications of population aging and decline are also very profound, as they contribute to a decline in growth potential, a deterioration in the fiscal balance, and a fall in housing prices. Given that other developed countries will face the same problems despite some differences in timing and magnitude, the economic effects of demographics deserve further study.”

The next part of this series will examine the evidence for Shirakawa-san’s conclusion as we turn to examine the position in the US, Germany and France.