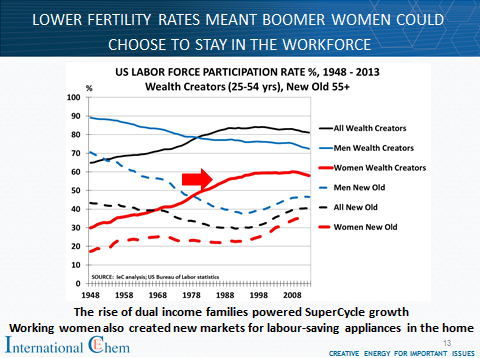 We had another excellent audience for Thursday’s ACS Chemistry and the Economy webinar.  We were swamped with questions both before and during the session, which kept moderator Bill Carroll and the blog on their toes right until the end.

The above chart came from the early part of the session, and focused on the two major changes that have taken place in US labor force participation rates over the past 65 years:

The key to the increased women’s rate, of course, was the decline in fertility rates that took place.  The blog will discuss this in more detail next week as its series on the economic impact of demographics continues .

Lower fertility rates meant women now had a choice as to whether they worked or not, particularly as legislation such as the 1963 Equal Pay Act began to create a more level playing field with men.  This created the phenomenon of dual income households for the first time in history.  In turn, this created major new markets for labour-saving appliances in the home, as women now had the income to afford these.

But now we can see a new trend developing as the US heads into the New Normal:

This is partly due, of course, to the fact that the New Old have an extra decade or more of active life ahead of them, compared to earlier generations.  But it must also be due to the New Old’s need for incomes, as their pensions prove too small to sustain their living standards.

The New Old thus represent one of the great growth opportunities of the modern economy.  But too many companies still regard anyone over 55 as only needing walking sticks and packets of pills.  Those that break out of this outdated mindset will do very well indeed by supplying affordable products to meet the New Old’s real needs.