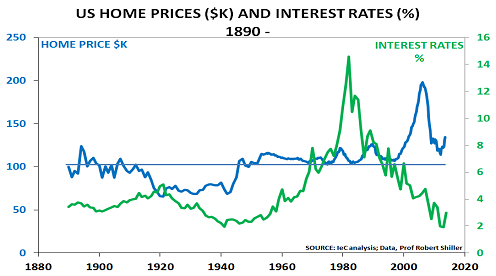 Housing used to be the key driver for US chemical demand in the SuperCycle, and went into overdrive in the subprime era between 2003-6, when housing starts rose to 2 million/year.  We don’t yet have December’s data, but we already know that 2013’s total will be only half this level, despite all policymakers’ efforts to revive the bubble.

Rather than face reality, however, policymakers instead continue to promote the idea of a ‘housing recovery’.  The reason is that a new downturn in housing will explode the myth that current policies can somehow return us to SuperCycle growth levels.  But memories are not that short and people will not easily forget what happened in the sub-prime bubble, as we documented in chapter 2 of Boom, Gloom and the New Normal:

The blue line on the above chart is a graphic reminder of the madness that occurred.  Created by Prof Robert Shiller, probably the leading expert on US housing markets, it shows the amazing bubble that caused prices to double from their long-term average in just 6 years.

Policymakers are now busy trying to inflate a second bubble, but this time they have major headwinds to overcome.  “Reversion to the mean” is always the most reliable investment strategy.  And plain common sense suggests that it is unlikely policymakers will be able to sustain today’s prices for much longer.  The trend is clearly downwards towards the long-term average, as the blog discussed when last updating the chart in July:

The best summary of the otulook, as often, comes from Prof Shiller and the latest S&P/Case-Shiller house price report.  In discussing the slowdown of prices since the summer they warn  that the “monthly numbers show we are living on borrowed time and the boom is fading“.