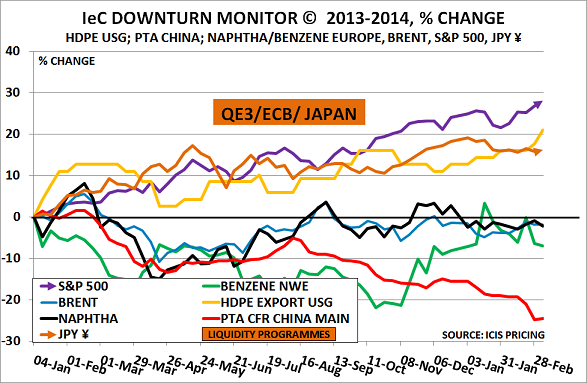 “The proper role for monetary policy is to work behind the scenes to promote long-term growth and price stability, yet central banks have instead attempted to “manipulate asset prices and financial markets” to fine-tune their economies.

“I do not think this is a particularly healthy state of affairs for the central banks or our economies.

“If central banks do not limit their interventionist strategies and focus on returning to more normal policy-making aimed at promoting price stability and long-term growth, then they will simply encourage the financial markets to ignore fundamentals and to focus, instead, on the next actions of the central bank.”

Well, yes.  Indeed.  Absolutely.  That seems to be the only possible comment in response to the above speech by US Federal Reserve Governor Charles Plosser last week.

Though one might also add that it is perhaps a bit late to be only worrying about this now, after 5 years and $33tn of global government stimulus?

But Plosser’s comments probably do indicate that we are finally coming to the end of the road for these failed policies.  And certainly future historians, like the blog, will indeed wonder what on earth policymakers thought they were doing, when they abandoned their true role of promoting long-term growth and price stability.

In the meantime, they have created a monster with their efforts to manipulate asset prices and financial markets.  The scale of their money-printing means markets no longer provide price discovery.  Instead, they have become traders’ markets, where the only game in town is to anticipate what the central banks will do next.

And even this trading is largely carried out with debt.  Margin debt on the New York Stock Exchange is now at its highest-ever level, even higher than in 2007, as “everyone knows the Federal Reserve won’t let stock markets slide”.

We can see this very clearly in the chart above of the blog’s own IeC Downturn Monitor:

US polyethylene markets have followed this domestic trend, with net US exports 35% below their 2009 peak, as the blog will discuss later this week.  Whilst other markets have been basically flat, with even normally volatile benzene trading within a 20% range since January 2013 (green).

Naphtha (black) and Brent oil (blue) have also barely moved by comparison with normal historical trends.  This is another sign that the effect of the stimulus is wearing thin, as these prices initially followed the S&P 500 very closely from 2009 onwards in the ‘correlation trade’.

The critical market is PTA in China (red).  This is now making new lows almost every week.  It is potentially another sign that the new Chinese leadership’s policies are starting to have an effect.

Something has to break, at some point.  And the ‘something’ may well be China, for the reasons discussed in the blog’s new Research Note.  If China does abandon stimulus policies, then other markets will surely follow, as it has been the biggest player.

We can expect enormous volatility when this happens, as markets suddenly return to their true role of price discovery.  And the blog’s guess is that people will then become very angry as they realise, too late, they have been living in a dreamworld created by the attempt to “manipulate asset prices and financial markets”.

Benchmark product price movements since January 2013 are below, with ICIS pricing comments:
PTA China, down 25%. “Buyers were unwilling to raise their buying ideas quickly in the wake of high downstream polyester inventories and poor margins”
Benzene, Europe, down 7%. “US market will continue to drive global pricing direction. Ample supply in Asia should keep the arbitrage window from there into the US wide open, which may potentially limit any export-driven upside to pricing in Europe”
Brent crude oil, down 2%
Naphtha Europe, down 2%. “Europe is structurally long on naphtha, and sellers need to export to the US gasoline and Asian petrochemical sectors”
US$: yen, up 16%
HDPE US export, up 21%.  “Global buyers are taking a wait-and-see stance to see if prices may drop in the future”
S&P 500 stock market index, up 28%