Price war looms in US auto market as incentives increase 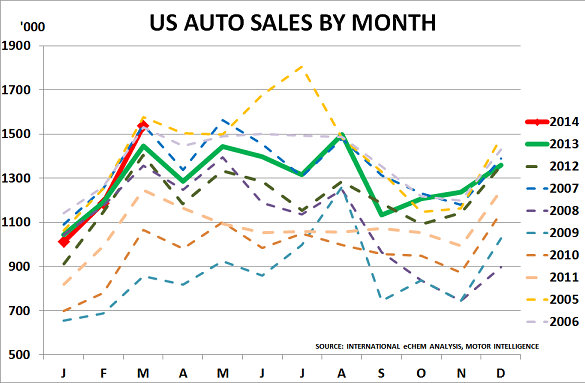 The blog is awarding itself a pat on the back this morning, as its forecast last month for the US auto market seems to have proved more accurate than those of the experts.

Under the heading ‘US automakers increase incentives as sales fail to boom’, it forecast:

“The blog therefore suspects that March will be a strong month for US new car sales.  And whilst manufacturers will hope that it marks the start of a sustained recovery, it seems more likely that the most successful dealers will be those with the best incentives.”

March sales are summarised in the chart above.  They were the strongest for the month since 2007 (red square) as top analysts Wards Autos reported:

“The average incentive for light vehicles was $2,773 in March, up $203 (7.9%) from March 2013 and up $71 (2.6%) from February 2014.  Weak Q1 sales caused inventory levels to swell, and manufacturers have had to be more generous with their incentive spending in order to accelerate sales, as evidenced by the 8% year-on-year increase.”

The detail of the sales figures further confirms the importance of incentives in moving volume:

Thus encouraged, the blog will make a further forecast for April, that sales incentives will continue to increase.  Those manufacturers who lost out in March will have to fight back to reclaim market share.  GM could be especially aggressive given public concern over its recall of 6 million cars for safety problems so far in 2014.

The background to the problem is simply lack of demand.  Over Q1, and despite March’s sales bonanza, GM’s total sales were down 2.3%, Ford’s down 2.8%, Toyota’s down 1.6%.  Only Chrysler amongst the big 4 saw sales increase, by 11.1%, due to its aggressive pricing policy.

At the same time, manufacturers will no doubt start to reduce production runs, to recognise the reality that the long-delayed recovery has still not arrived.  Ford, for example, had increased Fusion production by 100k back in August, when market optimism was at its peak.