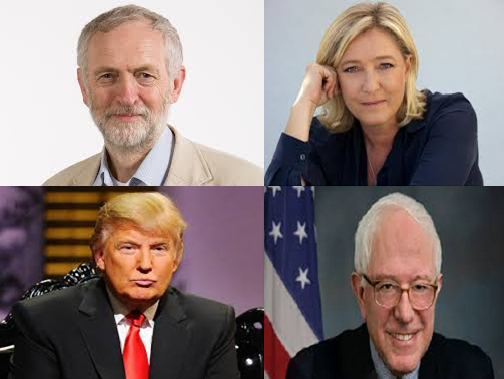 My local MP, Jeremy Corbyn, won the UK Labour Party leadership election on Saturday with a 60% majority.  An anti-NATO socialist, he has represented the constituency for 32 years, and has never held even a junior ministerial post.  Now, he could possibly become the UK’s next Prime Minister.

His path to power depends on two developments taking place, neither of which are impossible to imagine.  First, he needs to win back the 40 seats that Labour lost to the Scottish Nationalists in May.   And then he has to hope the ruling Conservative Party tears itself apart during the up-coming Europe Referendum.

Of course, protest movements always face problems when taking power, as they generally lack the discipline needed to be in government.  This pattern may already be playing out for Syriza in this month’s new Greek election.  But as Corbyn’s win shows, the populism they represent is now impacting mainstream parties in both the USA and Europe.

In the USA, the establishment candidacies of Hillary Clinton for the Democrats and Jeb Bush for the Republicans are being upstaged by the two populist candidates – Bernie Sanders and Donald Trump:

Meanwhile in France, polls show Marine le Pen of the National Front party with an early lead ahead of 2017’s Presidential election.  Europe’s failure to act in an united way over the Syrian refugee crisis is adding to her appeal.

This highlights how anti-establishment protest is moving slowly but surely into mainstream politics.  Of course, it is fashionable amongst political commentators to say that Corbyn, Trump, Sanders and le Pen are “unelectable”.  But this is to ignore the critical fact that governments lose elections when they become out of touch with the electorate.  As the Wall Street Journal noted last week:

“The biggest thing leaders don’t do now is listen. They no longer hear the voices of common people. Or they imitate what they think it is and it sounds backward and embarrassing. In this age we will see political leaders, and institutions, rock, shatter and fall due to that deafness.”

The economic success of the BabyBoomer-led SuperCycle meant that politics as such took a back seat.  People no longer needed to argue over “who got what” as there seemed to be plenty for everyone.  But today, those happy days are receding into history – hence the growing arguments over inequality and relative income levels.

Companies and investors have had little experience of how such debates can impact them in recent decades.  They now need to move quickly up the learning curve.  Political risk is becoming a major issue, as it was before the 1990s.

WEEKLY MARKET ROUND-UP
My weekly round-up of Benchmark prices since the Great Unwinding began is below, with ICIS pricing comments:
Brent crude oil, down 54%
Naphtha Europe, down 52%. “Many market participants continue to observe the market. Concerns over a slowing Chinese economy linger, especially on the country’s appetite for plastics”
Benzene Europe, down 61%. “The lower spread between naphtha and benzene in recent months was driven by sluggish downstream demand in the phenol and cyclohexane markets and increasingly weak signals from the Chinese economy”
PTA China, down 44%. “Plant turnarounds in China had tightened PTA supply, sources with more market participants looking for cargoes”
HDPE US export, down 35%. “there was talk of more slippage in light trading in a market where material is plentiful.”
¥:$, down 18%
S&P 500 stock market index, unchanged