China’s lending bubble is being deflated

The changes underway in China’s lending policies are far more significant that anything being planned by central banks in Tokyo, Frankfurt or Washington as I describe in my latest post for the Financial Times, published on the BeyondBrics blog 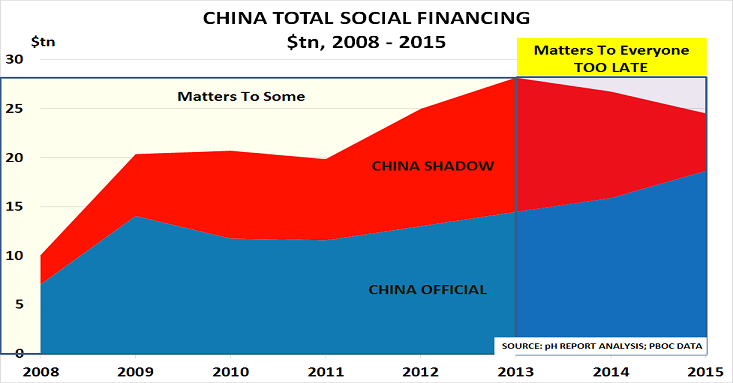 Investors’ attention remains focused on the minutiae of central bank policies in the developed world. But they might spare a thought for developments in China’s lending policies.

The implications of these dwarf anything being considered in Tokyo, Frankfurt, London or Washington, as the chart below highlights. It shows the changes since 2008 in official and shadow lending, which together constitute China’s total social financing (TSF).

According to the Brookings Institution, the period between Q4 2008 and Q1 2014 saw TSF rise from 129 per cent to 207 per cent of GDP. Unsurprisingly, this caused the global commodities market to glow red-hot as China’s property sector became a speculator’s heaven.

The key moment was probably 2011, when the myth began to take hold that China had suddenly become “middle class”. Companies and investors devoured the headlines from the Asian Development Bank’s 2011 Report, which suggested that the majority of Chinese households had “become middle class by 2007”. And they chose to ignore as mere detail, its caveat that this was based on “$2 – $20 purchasing power parity per capita daily income”. Yet even two adults earning $20 a day, every day of the year, would have an annual combined income of just $14,600, well below the poverty line in any western country.

Worryingly, it seems many are still reluctant to remove their rose-tinted glasses. As a result, risks are rising in financial markets, as Xi is most unlikely to suddenly allow lending to ramp up again in support of China’s Old Normal economy. His focus is instead on November 2017, when the National Congress meets to reappoint him for a second five-year term. Any wavering now would undermine his core narrative, which highlights his success in tackling the problems of debt, pollution and corruption that he inherited. And it would distract from the key message of his New Normal policies, which aim to rebalance growth in favour of the long-neglected rural half of the country.

This scenario, of course, implies further pain ahead in the EMs and the west for those who have invested in building new capacity to supply China’s mythical middle classes. This pain will likely be intensified by the decision to focus China’s new Five-Year Plan for 2016–2020 on a supply-side revolution, modelled on those carried out by Margaret Thatcher and Ronald Reagan in the 1980s. Anyone who lived through that period needs no reminding that restructuring an outdated economy is an extremely painful process, as over-capacity is reduced and inefficient industries downsized.

The key issue is that China’s lending bubble until 2013 was like a balloon. And as we learnt to our cost with the US subprime bubble, it is highly dangerous to keep on pumping until the balloon bursts. Xi’s core problem is that China’s lending bubble has essentially been subprime on steroids: as the FT reported back in 2011, house price to earnings ratios in the Tier 1 cities had already reached 14: 1, compared with an average of 5: 1 in the US. There are simply no precedents for safely deflating a bubble of this size.

Xi’s only option is to try and deflate the bubble by following Deng Xiaoping’s advice “to cross the river by feeling the stones”. Investors therefore need to spend much more time on studying developments in China’s lending policies. Obsessing about central bank policy in developed markets may provide much needed light relief, but means they are in great danger of finding themselves all at sea as Xi continues to reverse the tide of leverage.