Petrochemicals must face up to multiple challenges 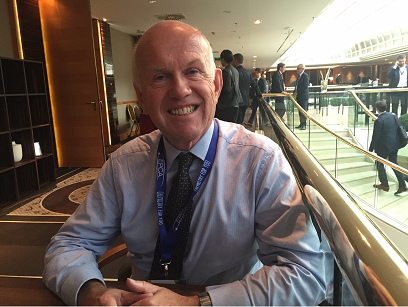 Europe’s petrochemical sector must prepare now for the trade war, US start-ups, Brexit and the circular economy, as I discuss in this interview with Will Beacham of ICIS news  at the European Petrochemical Association Conference.

With higher tariff barriers going up between the US and China, the market in Europe is likely to experience an influx of polymers and other chemicals from exporters looking for a new home for their production, International eChem chairman, Paul Hodges said.

Speaking on the sidelines of the European Petrochemical Association’s annual meeting in Vienna, he said: “The thing we have to watch out for is displaced product which can’t go from the US any more to China and therefore will likely come to Europe.”

In addition to polyethylene, there is an indirect effect as domestic demand in China is also falling, he said, leaving other Asian producers which usually export there to also seek new markets and targeting Europe.

“The US isn’t buying so many consumer goods from China any more – and that seems to be the case because container ships going from China to the US for Thanksgiving and Christmas aren’t full. So NE and SE Asian chemical producers haven’t got the business they expect in China and are exporting to Europe instead.  We don’t know how disruptive this will be but it has quite a lot of potential.”

US polymer start-ups
Hodges believes that the new US polymer capacities will go ahead even if the demand is not there for the product. This is because the ethane feedstocks they use need to be extracted by the producers and sellers of natural gas who must remove ethane from the gas stream to make it safe.

For these producers some of the cost advantages have already disappeared because of rising ethane prices.

“The exports of US ethane are adding one or two more crackers to the total. And without sufficient capacity ethane prices have become higher and more volatile.”

Hodges points out that pricing power is being lost as poor demand means producers cannot pass on the effect of rising oil prices. “Margins are being hit with some falling by 50-60%,” he said.

Circular economy
EU targets mean that all plastic packaging must be capable of being recycled, reused or composted in Europe by 2025. For the industry this could be a huge opportunity, but only if it acts fast, said Hodges: “We have to develop the technology that allows that to happen. We will need the [regulatory] approvals and if we don’t get moving in the next 12-18 months we are in trouble.”

Brexit beckons
According to Hodges: “We are in the end game for Brexit. We talk to senior politicians from both sides who don’t think there is a parliamentary majority for any Brexit option.”

He fears that if no deal can be agreed there is a chance the UK will refuse to pay its £39bn divorce bill.

“Then what happens to chemical regulation and transport? Although the bigger companies have made preparations, only one in seven in the supply chains are getting prepared,” he added.  This is why we have launched ReadyforBrexit.

You can listen to the full podcast interview by clicking here.