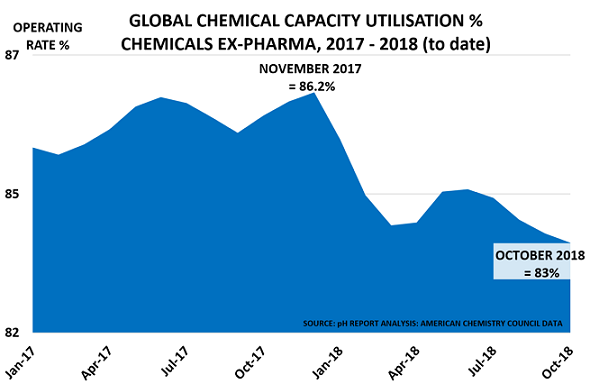 The chemical industry is easily the best leading indicator for the global economy.  And thanks to Kevin Swift and his team at the American Chemistry Council, we already have data showing developments up to October, as the chart shows.

It confirms that consensus hopes for a “synchronised global recovery” at the beginning of the year have again proved wide of the mark.  Instead, just as I warned in April (Chemicals flag rising risk of synchronised global slowdown), the key  indicator – global chemical industry Capacity Utilisation % – has provided fair warning of the dangers ahead.

It peaked at 86.2%, in November 2017, and has fallen steadily since then. October’s data shows it back to June 2014 levels at 83.6%. And even more worryingly, it has now been falling every month since June. The last time we saw a sustained H2 decline was back in 2012, when the Fed felt forced to announce its QE3 stimulus programme in September.  And it can’t do that again this time.

The problem, as I found when warning of subprime risks in 2007-8 (The “Crystal Blog” foresaw the global financial crisis), is that many investors and executives prefer to adopt rose-tinted glasses when the data turns out to be too downbeat for their taste.  Whilst understandable, this is an incredibly dangerous attitude to take as it allows external risks to multiply, when timely action would allow them to be managed and mitigated.

It is thus critical that everyone in the industry, and those dependent on the global economy, take urgent action in response to BASF’s second profit warning, released late on Friday, given its forecast of a “considerable decrease of income” in 2018 of “15% – 20%”, after having previously warned of a “slight decline of up to 10%”.

I have long had enormous respect for BASF and its management. It is therefore deeply worrying that the company has had to issue an Adjustment of outlook for the fiscal year 2018 so late in the year, and less than 3 weeks after holding an upbeat Capital Markets Day at which it announced ambitious targets for improved earnings in the next few years.

The company statement also confirmed that whilst some problems were temporary, most of the issues are structural:

This confirms the warnings that I have been giving here since August when reviewing H1 auto sales (Trump’s auto trade war adds to US demographic and debt headwinds).

I noted then that President Trump’s auto trade tariffs were bad news for the US and global auto industry, given that markets had become dangerously dependent on China for their continued growth:

Next year may well prove even more challenging if the current “truce” over German car exports to the USA breaks down,

INVESTORS HAVE WANTED TO BELIEVE THAT INTEREST RATES CAN DOMINATE DEMOGRAPHICS 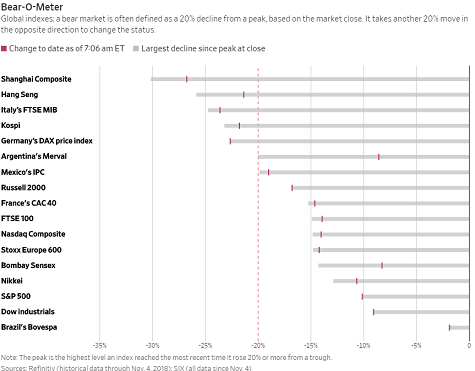 The recent storms in financial markets are a clear sign that investors are finally waking up to reality, as Friday night’s chart from the Wall Street Journal confirms:

“In a sign of the breadth of the global selloff in stocks, Germany’s main stock index fell into a bear market Thursday, the latest benchmark to have tumbled 20% or more from its recent peak….Other markets already in bear territory are home to companies exposed to recent trade fights between the U.S. and China.”

The problem, as I have argued since publishing ‘Boom, Gloom and the New Normal: how the Ageing Boomers are Changing Demand Patterns, again“, in 2011 with John Richardson, is that the economic SuperCycle created by the dramatic rise in the number of post-War BabyBoomers is now over.

I highlighted the key risks is my annual Budget Outlook in October, Budgeting for the end of “Business as Usual”.  I argued then that 2019 – 2021 Budgets needed to focus on the key risks to the business, and not simply assume that the external environment would continue to be stable.  Since then, others have made the same point, including the president of the Council on Foreign Relations, Richard Haas, who warned on Friday:

“In an instant Europe has gone from being the most stable region in the world to anything but. Paris is burning, the Merkel era is ending, Italy is playing a dangerous game of chicken with the EU, Russia is carving up Ukraine, and the UK is consumed by Brexit. History is resuming.”

It is not too late to change course, and focus on the risks that are emerging.  Please at least read my Budget Outlook and consider how it might apply to your business or investments. And please, do it now.

PREVIOUS POST Chemistry & the Economy: 2019 Outlook
NEXT POST Chart of the Year - China's shadow banking collapse means deflation may be round the corner