The End of “Business as Usual” 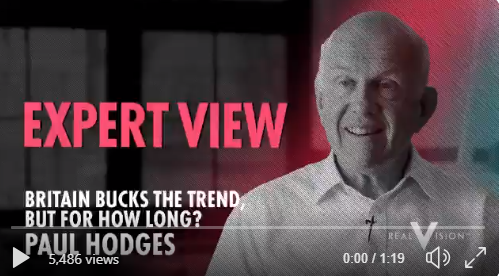 In my interview for Real Vision earlier this month, (where the world’s most successful investors share their thoughts on the markets and the biggest investment themes), I look at what data from the global chemical industry is telling us about the outlook for the global economy and suggest it could be set for a downturn.

“We look at the world and the world economy through the lens of the chemical industry. Why do we do that? Because the chemical industry is the third largest industry in the world after energy and agriculture. It gets into every corner of the world. Everything in the room which you’ll be watching this interview is going to have chemicals in it. And the great thing is, we have very good, almost real time data on what’s happening.

“Our friends at the American Chemistry Council have data going back on production and capacity utilization since 1987. So 30 years of data, and we get that within 6 to 8 weeks of the end of the month. So whereas, if you look at IMF data, you’re just looking at history, we’re looking at this is what’s actually going on as of today.

“We look, obviously, upstream, as we would call it, at the oil and feedstocks markets, so we understand what’s happening in that area. But we also– because the chemical industry is in the middle of the value chain, you have to be like Janus. You have to look up and down at the same time, otherwise one of these big boys catches you out.

“And so we look downstream. And we particularly look at autos, at housing, and electronics, because those are the big three applications. And of course, they’re pretty big for investors as well. So we see the relative balance between what’s happening upstream, what’s  happening downstream, where is demand going, and then we see what’s happening in the middle of that chain, because that’s where we’re getting our data from. 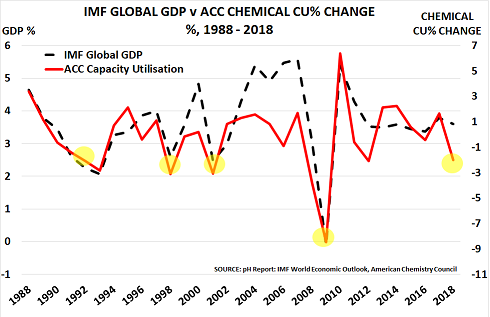 “As the chart shows, our data matches pretty well to IMF data. It shows changes in capacity utilization, which is our core measurement. If if you go back and plot that against history from the IMF, there is very, very good correlation. So what we’re seeing at the moment– and really, we’ve been seeing this since we did the last interview in November— is a pretty continuous downturn. 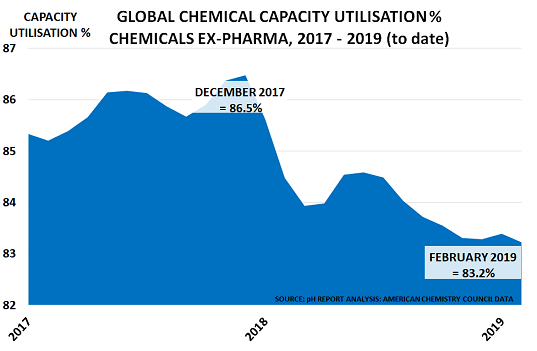 “The reason for this is that the first quarter– this year, particularly– was completely free of holidays.  Easter was late, so there was nothing to interrupt you there. There was the usual Lunar New Year in China, but that always happens, so there’s nothing unusual about that.

And normally what happens is, that in the beginning of the new year, people restock. They’ve got their stock down in December for year end purposes, year end tax purposes, now they restock again. And of course, they build stock because the construction season is coming along in the spring and people tend to buy more cars in that period, and electronics, and so on.

“So everything in the first quarter was very positive. And one wouldn’t normally be surprised to start seeing stock outs in the industry, particularly after a quiet period in the fourth quarter. And unfortunately, we haven’t seen any of that. We’ve seen– and this is worth thinking about for a moment– we’ve seen a 25% rise in the oil price because of the OPEC Russia deal, but until very recently we haven’t seen the normal stock build that goes along with that.”

As we note in this month’s pH Report, however, this picture is now finally changing as concern mounts over oil market developments – where unplanned outages in Venezuela and elsewhere are adding to the existing cutbacks by the OPEC+ countries. Apparent demand is therefore now increasing as buyers build precautionary inventory against the risk of supply disruption and the accompanying threat of higher prices.

In turn, this is helping to support a return of the divergence between developments in the real economy and financial markets, as the rise in apparent demand can easily be mistaken for real demand. The divergence is also being supported by commentary from western central banks.  This month’s IMF meeting finally confirmed the slowdown that has been flagged by the chemical industry since October, but also claimed that easier central bank policies were already removing the threat of a recession.

We naturally want to hope that the IMF is right. But history instead suggests that periods of inventory-build are quickly reversed once oil market concerns abate.