Last week, 95 year-old Harry Read repeated the jump that he and his fellow parachutists had made as the advance party for the D-Day landings. He told ITV News in a video interview that before the 1944 jump, their Commanding Officer had explained in matter of fact terms  that:

“50% of them would be casualties so the odds would be very much against their survival  If you die in the process, you’ll be one of a lot who do so”

In fact, nearly 200 died as they landed, because the fields had been flooded by the enemy.  Yet none had tried to turn back as they boarded the aircraft.  And hundreds of thousands of young men and women made the same choice, in support of an objective they believed was worth this supreme sacrifice. 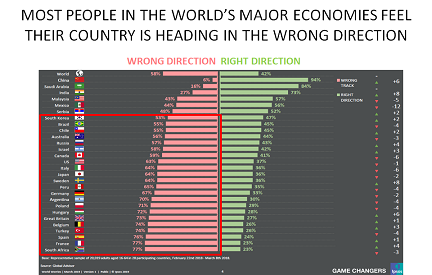 Contrast that history with the quality of leadership today and it is immediately obvious there are very few “leaders” today, particularly in the political sphere. Instead, our politicians believe in ‘leadership by focus group’, where members of the public are used to develop “talking points” for use in a 3 minute media interview.

Unsurprisingly, people often come to believe that the politicians themselves have no principles of their own.  Unlike the leaders of the War such as Churchill, Roosevelt and de Gaulle, we increasingly have populists who believe in offering simple solutions to complex problems, and a media which highlights “excitement” over serious analysis.

The result is a collapse of confidence, as confirmed by the chart from the latest IPSOS Mori poll of “What Worries the World”.  As I first discussed here in November 2016, most people in the world’s major economies believe that their country is heading in the wrong direction:

One can see the change in terms of what wasn’t said at the commemorations last week, and what was:

It is hard to escape the conclusion that we are reaching the end of an era.