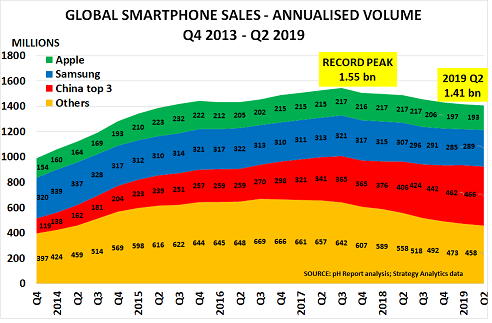 Global smartphone sales have now been falling for 8 consecutive quarters, since Q3 2017. They are now down 9% from their peak, as the chart shows, based on Strategy Analytics data.  As always in a falling market, Winners and Losers are staring to appear:

As discussed here before, the Western majors have failed to recognise this paradigm shift in the market.  Cash-strapped consumers are no longer prepared to pay $1000+ for the prestige of an up-market brand, as analysts IDC note:

“A key driver in Q2 was the availability of vastly improved mid-tier devices that offer premium designs and features while significantly undercutting the ultra-high-end in price”.

President Trump’s new China tariffs will, of course, create further problems for Apple and Google as these will:

COMPANIES ARE FOCUSING ON THE WRONG MARKETS 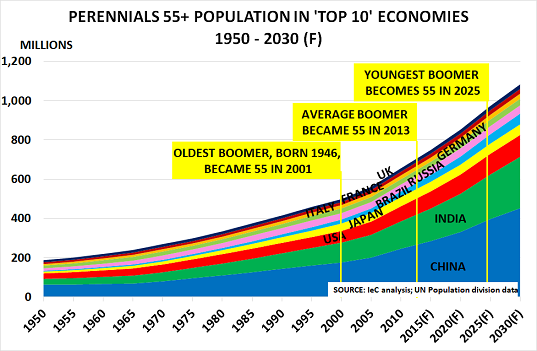 But the really critical issue for most smartphone sellers is their continued focus on the Wealth Creator 25 – 54 age group. This was a great strategy during the Boomer-led SuperCycle, as there were vast numbers of Western Boomers with money to spend and a liking for innovative products. But not today, as the chart above confirms:

Perennials don’t need ever-more complicated “bells and whistles” on their phones.  They just want the basic features, clearly laid out. And they need their phones to be affordable, as their incomes decline as they move into retirement.

Equally important is the other major untapped market for growth –  the 3.4bn people in the world who currently don’t own a smartphone and can’t afford one.  As the Wall Street Journal has reported:

“Smart feature phones aren’t only inexpensive, but they also have physical keypads that are less intimidating than touch screens for those new to the technology. Meanwhile, their batteries last for days, a bonus in places where electricity is unreliable”.

These phones represent a major threat to smartphone sellers, and their supply chains around the world:

Already apps such as Facebook and WhatsApp have been modified to work on feature phones, further extending their appeal.  Google has also invested in Hong Kong’s KaiOS, which makes the operating system most widely used in feature phones.

The Orange network is also starting to realise the potential. It is rolling out cheap data services on the Jio model in the Ivory Coast, and plans to extend service elsewhere in Africa and the Middle East. Meanwhile Indonesia’s WizPhone is about to offer a phone for $7, and is planning a launch in Brazil.

As the world moves into recession, losing companies will stick their heads in the sand. They will hope central banks somehow find a way out of the debt mess they have created. Winning companies, however, will go back to first base and focus on unmet market needs, such as for smart feature phones, and figure out a way to supply them profitably.

UK, EU27 and EEA businesses need to start planning for a No Deal Brexit on 31 October

New UK premier, Boris Johnson, said last week that the UK must leave the EU by 3...

Oil markets remain poised between fear of recession and fear of a US attack on I...