Home Blogs Budgeting for paradigm shifts and a debt crisis

Budgeting for paradigm shifts and a debt crisis

It is now 8 years since John Richardson and I published our 10-year forecast for 2021 in Boom, Gloom and the New Normal: How the Western BabyBoomers are Changing Demand Patterns, Again’. Remarkably, its core conclusions are very relevant today, as the summary confirms.

Unfortunately, as we feared, policymakers refused to junk their out-of-date models, despite the lesson of the 2008 financial crisis. Instead, they doubled down on their failed stimulus policies.

As a result, they have created record levels of government, corporate and individual debt – which can never be repaid. Even the IMF has now started to recognise the timebomb that has been created:

“We look at the potential impact of a material economic slowdown – one that is half as severe as the global financial crisis of 2007-08. Our conclusion is sobering: debt owed by firms unable to cover interest expenses with earnings, which we call corporate debt at risk, could rise to $19tn. That is almost 40% of total corporate debt in the economies we studied.”

Already we are starting to see the unwinding of some of the most extreme examples of the bubbles that have been created in asset prices:

And if the IMF are right, which is almost certain, we must expect major bankruptcies to take place over the next few years.  Over-leveraged businesses go bust very quickly when profits decline, as they can no longer pay their interest bills.

As with the run-up to the 2008 crisis, the signs of trouble are already building. The Fed has had to provide $200bn of support to overnight money markets in New York over the past 6 weeks, and is having to add another $60bn/month into next year.

Companies now face a binary choice as they finalise their Budgets for 2020-2022.

They can choose to ignore what is happening in the real world and continue to hope ‘business as usual’ will continue? Or they can start contingency planning by working through the implications of our forecasts for their Downside Scenario? 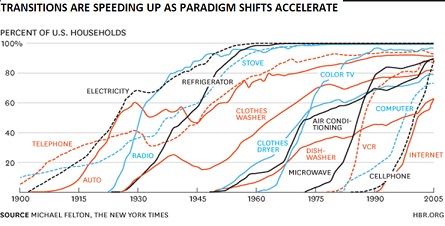 One key issue is that our 2021 predictions included paradigm shifts as well as economic forecasts. And as the chart above shows, the transitions associated with paradigm shifts are now accelerating:

It is clear that a whole series of major paradigm shifts are now underway, as I noted 2 weeks ago:

The problem is that incumbents, as we have seen with central banks, are usually very slow to notice what is happening in the real world outside their office or factory.  The reason is simple – they forget what they have discussed with their friends and family once they go to work. Group-think instead takes over, and everyone goes blindly on believing their own propaganda until it is too late.

German car company VW was a classic example of a blinkered strategy. As top executives now recognise, it was only the “dieselgate” emissions disaster that enabled new management to introduce the Transform 2025 strategy based on a transition to Electric Vehicles.

Most companies don’t face the near-death challenge faced by VW in 2015. But they do face major challenges over the next 2-3 years, which will require them to implement major shifts in their strategy if they want to continue to grow revenue and profits in the future.

The good news is that these challenges can be turned into opportunities with hard work and imagination.  Please let me know if I can help you to achieve the necessary transformation.