Home Blogs Companies ignore the Perennials 55+ generation at their peril

Companies ignore the Perennials 55+ generation at their peril 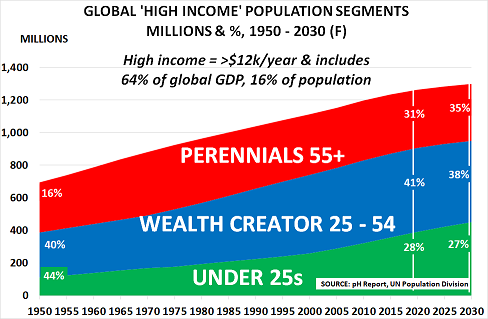 Nearly a third of the the world’s High Income population are now in the Perennials 55+ generation.

Yet companies mostly ignore their needs – assuming that all they want are walking sticks and sanitary pads.  Instead, they continue to focus on the relatively declining number of younger people.

No wonder many companies are going bankrupt, and many investors are seeing their portfolios struggle.  As the chart shows:

This is a vast change from 1950, when most people still died around pension age.  But it seems very few people have realised what has happened.  When we talk about the global population expanding, we all assume this means more babies being born.  But in fact, 422m of the 754m increase in population between now and 2030 will be Perennials – only 120m will be under-25s.

It is therefore no surprise that central bank stimulus policies have failed.  Rather than focusing on this growth sector, they have instead slashed interest rates to near-zero.  But, of course, this has simply destroyed the spending power of the Perennials, as the incomes from their savings collapsed.

If the central banks had been smarter, they would have junked their out-of-date models long ago.  They would have instead encouraged companies to wake up to this new opportunity, and create new products and services to meet their needs.  Instead, companies and most investors have also continued to look backwards, focusing on the growth markets of the past.

The Perennials are the great growth opportunity of our time. Their needs are more service-based than product-focused – they want mobility,  for example, but aren’t so bothered about actually owning a car.  But it’s not too late to get on board with the opportunity, as the number of Perennials is going to continue to grow, thanks to the marvel of increased life expectancy.

I explore this opportunity in more detail in a new podcast with Will Beacham – please click here to download it.

Major paradigm shifts are occurring in the global economy, as I describe in a ne...

MY ANNUAL BUDGET OUTLOOK WILL BE PUBLISHED NEXT WEEK Next week, I will publish m...