Portugal shows the way to climate neutrality by 2050

“If you don’t know where you are going, any road will do”. The Irish proverb’s logic shows us the way forward on the greatest challenge that we face today, of achieving climate neutrality by 2050.

As the President of the European Petrochemical Association, Marc Schuller, highlighted last month when issuing a ‘call to action’:

“The Youth of the the world is calling for ambition and transformation. There is a new sense of urgency and as business leaders we should ensure that we embrace it and that our response as an industry is keeping up with this new pace of change and level of ambition.”

Governments also have a major role to play.  And it is important that they speak in language that ordinary people can understand.

This is why Portugal’s Roadmap for Carbon Neutrality 2050 is so important.  As the chart shows, it positions climate neutrality as an opportunity. Most people, after all, would prefer to be up with the peleton – challenging for the yellow jersey and the lead, not stuck at the back.

There is also very little doubt that climate change is taking place.  After all, as the chart on the right shows, the global population has more than trebled since 1950, from 2.5bn to 7.8bn today.  An increase of this size must have a major impact on the world in which we live.

The chart on the left shows one aspect of this impact in terms of the rise in surface temperatures from 1960, versus 1850-1900.  We have good data for both periods, and so the data’s reliability is high.

Of course, correlation doesn’t always equal causation. And no doubt there are a range of other factors involved – some positive, some negative. But given the observable risks of climate change today, it makes no sense to ignore the issue and hope it will go away. 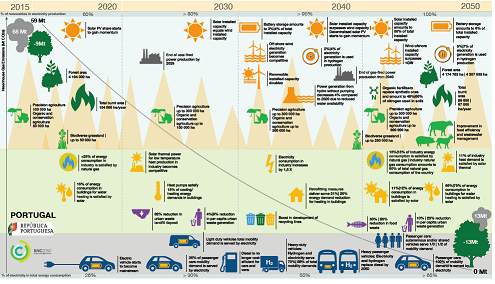 This is why voters are telling their leaders that climate change is important.  After all, what is the point of a better standard of living, if at the same time you worry that you might get flooded out of your home – or it might be burnt to cinders?

Portugal’s response is an excellent example of a government taking a lead, within the framework of the European Green Deal to be launched early next year. As the chart shows, it is focused on the key areas and aims to carry the population with it: 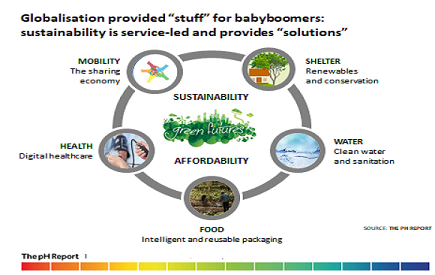 Of course, nobody likes change. But as the chart above shows, the world is already changing.

As I discussed last month,  the world’s population is now expanding because people are living longer, not because women are having lots of babies.

As Portugal has realised, most people – given the choice – would like to be at the front of the pack. We all want to enjoy the opportunities that the rise of the sustainability agenda will provide.

Corporate leaders need to respond – unless they want to risk finding themselves on their own, at the back of the pack.