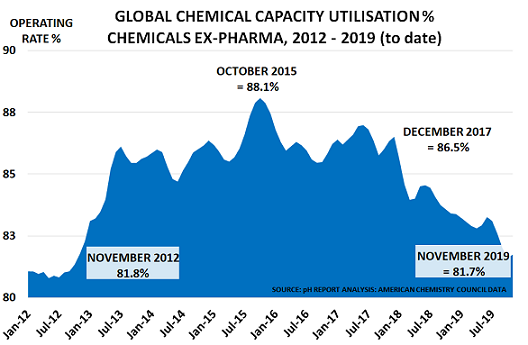 The IMF has now confirmed that the world economy has moved into the synchronised slowdown that I forecast here a year ago. Its analysis also confirms the importance of the issues highlighted then, including “rising trade barriers and increasing geopolitical tensions”, a sharp decline in manufacturing, contraction in the auto industry and structural forces such as the impact of ageing populations.

Capacity Utilisation (CU%) data from the American Chemistry Council has therefore once again proved to be the best leading indicator for the global economy. It has been far more reliable than stock markets, where valuations continue to be massively distorted by central bank stimulus. And unfortunately, the latest data shows no sign of any improvement as the chart confirms, with November’s CU% now back at November 2012’s level at 81.7%.

Of course, it remains very easy to ignore the warning signs. ‘Business as usual’ is always the most popular forecast, as we saw a year ago when the consensus assumed a sustainable economic recovery was finally underway. And it would be no great surprise if, in a year’s time, consensus opinion starts to claim that “nobody could have seen recession coming”.

This is why it seems likely that businesses will now start to divide into Winners and Losers. As the IMF note in their analysis, the current situation is “precarious”, with a number of potential downsides starting to crystallise. On a macro view, these include the growing supply chain risks created by Brexit, where the UK expects to leave the EU at the end of this month.

Anyone with experience of trade negotiations knows that these normally take years rather than months to complete. No Deal is therefore the most likely outcome in a year’s time at the end of the transition period.

This will have a major impact on industries with complex and highly integrated downstream value chains like autos, chemicals and aerospace. Contingency planning is therefore on the critical path for any company that currently relies on product flowing seamlessly and tariff-free across the UK-EU27 border.

Of course, potential Losers will continue to nurse the hope that the UK government might reverse its refusal to accept the 2-year extension offered by the EU. But anyone who followed the recent UK election campaign knows this is an unlikely outcome.

The chemical industry also has its own specific challenges to face, given the growing impact of US shale gas-based expansions in the polyethylene area. This is no great surprise, as I have been warning about the likely consequences of these supply-led expansions since they were first announced in 2014 . But unfortunately, the combination of stock market euphoria over the shale gas revolution and the Federal Reserve’s easy money policy meant that the core assumptions were never properly challenged.

Euphoria remained the rule even after the oil price collapse at the end of 2014 disproved the assumption that prices would always be above $100/bbl. And it continued despite President Trump’s election. As a self-confessed “tariff man”, his policies were always likely to upset the idea that plants could be sited half-way across the world from their markets.

Warning signs were also obvious around the assumption that China’s growth would remain at double-digit rates, creating an ongoing need for major imports. And more recently, concerns over climate change and plastic waste issues have created further question marks over the outlook for single-use plastic demand.

Incumbents are often slow to understand the likely impact of potentially disruptive developments on their businesses. Business discussions around the boardroom and water cooler can often take place in a parallel universe to those that happen outside the office with friends and family.

The upstream oil industry is currently providing a classic example of this phenomenon as it promotes the idea that despite mounting concerns over the role of fossil fuels in climate change, chemicals can somehow replace lost oil demand into transport. Yet as former Saudi Oil Minister Yamani warned back in 2000, “the Stone Age didn’t end for lack of stones, and the Oil Age will end long before the world runs out of oil”.

Unfortunately, therefore, it seems likely that 2020 will see today’s synchronised slowdown continuing to challenge consensus optimism. Contingency planning around recession risks should therefore be top of the agenda, particularly for companies with high debt levels.

But at the same time, better placed companies have a once in a generation opportunity to take advantage of the paradigm shifts now underway, as adoption rates accelerate up the typical S-curve. These Winners are likely to discover that their best days still lie ahead of them, given the range and scale of the new opportunities that are emerging.