Home Blogs Chemicals and the Economy “They may ring their bells now, before long they will be wringing their hands”

The wisdom of Sir Robert Walpole, the UK’s first premier, seems the only possible response to this weekend’s headline from the Wall Street Journal. How can a National Emergency ever be the basis for a major rise in stock markets?

Of course, we all know that stock markets have become addicted to stimulus. But the problem with stimulus is that the patient needs more and more of it, to keep markets moving higher:

But the headlines surrounding the National Emergency clearly did the job as far as the High-Frequency Traders were concerned. They still dominate equity and other major markets, and Friday afternoon was exactly the kind of bumper payday that they adore. 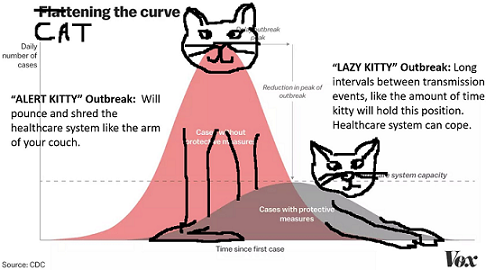 The only problem is that neither stock markets, nor even the Federal Reserve, can cure coronavirus. And if the pandemic continues as the experts expect:

Clearly, no hospital system in the world could cope with the higher end of this range, particularly if they all come at once. And although the US system is easily the most expensive in the world, its performance is relatively poor by comparison with other major Western nations.

One key issue, of course, is testing. Nobody can know the actual size of the problem until we know how many people are already affected. And yet, as the WSJ reports from the President’s speech on Friday:

By comparison, China already has the capacity to do 1.7 million tests a week, according to the World Health Organisation.

This, of course, is why the experts are talking about trying to ‘delay’ the pandemic, rather than ‘contain’ it, as the chart based on US Centers for Disease Control and Prevention analysis (interpreted by Vox) confirms.

The US lack of a proper social support system is also a major disadvantage. Around 34 million American workers have no access to paid sick leave, for example, and 27 million don’t have health insurance.  These people may well feel they have to keep working even if infected in order to pay the rent.

Hopefully, the new support package agreed on Friday night will help solve these problems. But who knows how long it will take to actually roll out the measures, and how many people will benefit? 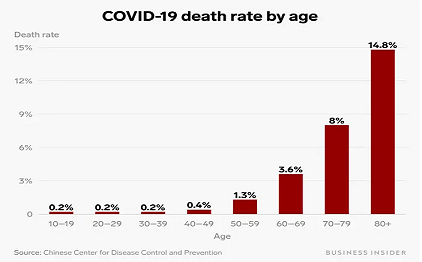 The essence of populism, of course, is that it supplies simple answers to complex problems. And coronavirus is likely to prove a classic case of this weakness in action:

Data from China and Italy confirms that the main risk from coronavirus is to people over the age of 70, as the chart shows. The CDC also recommend that people with serious chronic medical conditions such as heart disease, diabetes and lung disease need to take special precautions.

But their voice is being drowned out. People are understandably frightened, and they need wise and well-informed leaders to give them clear messages. Leaders should be focused on aiming to manage the pandemic and on taking the obvious steps to protect those most vulnerable.  Unfortunately, the opposite is happening as former UK Finance Minister, Lord Darling  has noted:

“There is a striking lack of global cooperation in dealing with coronavirus”.

The issue is that effectively closing down large parts of the economy in response to coronavirus is a very high risk strategy:

“Global growth is potentially approaching 1% this year (anything below 2.5% is essentially recession). The multitude of shocks in the system now risks a global “sudden stop”. Falling oil prices potentially accelerate mounting credit stress in the US. Vulnerable emerging markets are already seeing large outflows”.

We may well all come to regret, as we wring our hands in the summer, that the bells rang too soon.