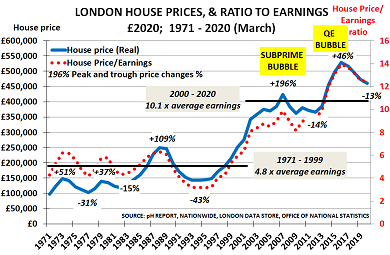 London property websites haven’t used the word “reduced” for many years. But it’s starting to appear again on homes for sale and rent, even in core city postcodes. And in another sign of the downturn, homes can now be on offer for months without moving.

The problem is that prices were already ready to tumble before Covid-19, as I discussed in July:

All in all, it would therefore be surprising if prices didn’t continue falling, back to the average house price/earnings ratio of the pre-2000 period. A temporary over-correction, where they went even lower, would also be normal after such a long period without a major fall.

Now, offices, schools and many shops have closed and the transport system has needed a £1.6bn ($1.9bn) bailout as tube traffic fell 95%.  Mortgage lenders are already tightening their loan standards as the combination of debt, deflation, demographics and Brexit threaten to create the perfect storm:

Debt. London property prices were already the highest in the country, as the chart shows. The key metric is house price/earnings, which was at 12.5x in Q1 based on Nationwide property and ONS earnings data.  Many property owners are being badly hit by income reductions during the crisis. And rents have soared as a percentage of income for furloughed tenants as Property Reporter describes:

“Tenants were already paying a hefty 64% of their net income on renting, however, those now on furlough have seen this cost increase to account for 85% of their monthly income.  The worst is Kensington and Chelsea where furloughs mean renting now accounts for 152% of the average wage.”

Deflation. UK interest rates have been falling fast in recent months, in line with global levels. The benchmark 10-year rate closed Friday at just 0.25%, clearly poised to follow other European countries into negative rates. Deflation now seems inevitable as demand craters due to the pandemic.

We have all only seen inflation in our lifetimes. And so the change will take time to absorb. One key impact is that deflation means prices will be cheaper tomorrow, and so it pays to wait before buying if one can. That shift alone will add to the pressure on house prices. And deflation also means that the cost of debt increases in real terms – rather than reducing with inflation.

Demographics.  As the chart shows, house price/earnings ratios averaged 4.8x between 1971 – 1999. First time buyers could often buy on a multiple of <3x.  That scenario changed after 2000, however, as Boomers  rushed into the Buy to Let market to boost their pension funds – encouraged by the Bank of England, as former Governor Lord George told Parliament in 2007:

“We knew that we had pushed consumption up to levels that could not possibly be sustained in the medium and longer term. But for the time being if we had not done that the UK economy would have gone into recession, just like the economies of the United States, Germany and other major industrial countries. That pushed up house prices and increased household debt. That problem has been a legacy to my successors; they have to sort it out.”

Of course, his successors didn’t “sort it out”. Instead, they followed the Subprime disaster with Quantitative Easing, creating even more free cash to keep the house and share price bubble moving along.

Wealthy foreigners from Asia, the Middle East and Russia all decided London property would make a good “bolt-hole” for their money. And Airbnb also came along to encourage landlords to buy up apartments to rent to higher-paying tourists.

Brexit. And now, just as the bubble is bursting, along comes Brexit to further reduce the attraction of London property. London voted to Remain, and most Londoners assumed that no UK government would dream of gambling with the country’s economy at a time of national crisis. But as last week’s failed talks showed, premier Johnson is determined to press ahead with a No Deal Brexit at year-end, despite the IMF’s warning last month that:

“A no-deal Brexit that severely disrupts supply chains and raises trade costs could potentially have large and long-lasting negative impacts on the economies of the United Kingdom and the European Union”.

This is likely to be very bad news for London as high-paying financial firms exit the City.  What the UK negotiators haven’t yet realised is that the EU27 are no longer so worried about the impact of a No Deal Brexit:

We are all flying blind today. But the past 2 decades of central bank folly mean that the pain, if it comes, is likely to be long-drawn-out. As homeowners learnt before 1999, buyers typically disappear when prices do start falling – leaving sellers to wait and hope.

What we do know is that the house price/earnings ratio is still double the 4.8x seen until 1999. This also suggests that the risks for London house prices are very high.