Asian LNG prices reached $32.50/MMBTU this month, up from less than $2/MMBTU in June.

In Europe, UK supermarkets have warned of containing food shortages in N Ireland due to the new Brexit trading rules.

None of this would have seemed possible even a year ago, when the pandemic had already begun. And it flags up the need for us to adopt new ways of working, with new business models that are more aligned to the New Normal world in which we are living.

Global supply chains worked perfectly well as they began. I was one of those responsible for building them in the chemical industry from 1987-1991, for my then company, ICI. We had a team of 12 people based in the major Asian countries, opening up opportunities in the chloralkali area. 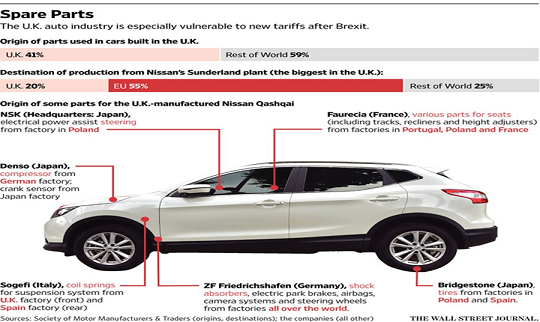 Looking back, it is clear that then, we had the benefit of specialist teams working to adapt our systems to cope with the new opportunities. I can also remember the early 1990s when a new concept, Supply Chain, began to be adopted to replace that of Distribution:

The Wall Street Journal chart showing the global nature of the Nissan Qashqai’s supply chain tells the story very vividly. Components arrive in the UK from around the world. The cars are assembled and then shipped out across Europe. 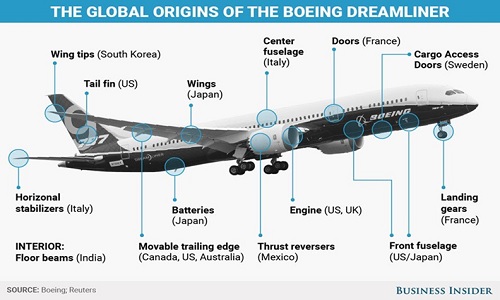 And then, of course, the complications started. If product could be made anywhere, then governments demand “their share” of the value added. The chart showing the production of Boeing’s Dreamliner highlights the growing complexity that was starting to undermine an initially simple concept.

In order to sell the Dreamliner around the world, Boeing had to agree to buy key components from all around the world. One might argue this had some benefits, as specialisms could develop in key areas and drive innovation. But it also added an awful lot of complexity as supply chains of varying qualities multiplied around the world.

Who can forget, for example, the problem with NASA’s Hubble Space Telescope’s mirror in 1990?  This vital component was out of position by 1.3mm (0.051 inches), which meant the telescope couldn’t operate properly until a servicing mission could take place in 1993.

NASA blamed the contractor, and the enquiry blamed everyone. But in reality, though none of us realised this at the time, this wasn’t just a teething problem with the new concept of Supply Chains. It was a warning that we couldn’t necessarily handle the complexity they caused.

Instead, we fell in love with the power of IT to help us with this task, forgetting that there is no such thing as Artificial Intelligence. The computer doesn’t think for itself, but instead simply consults its memory. And so it’s often a case of “Rubbish in, Rubbish out” if the poor programmer is given the wrong information to input, or makes a mistake.

Then there was a more recent warning with the Fukushima tragedy in 2011. Car production around the world nearly shutdown because Renesas Electronics’ factory was damaged in the disaster, and it made 40% of all the world’s microcontrollers. But still people thought IT, rather than a more robust system, was the answer.

So this is how we get to today’s shambles. Ships in the wrong place, goods all over the place, prices sky-high, buyers frantically over-ordering from everyone in the vain hope that someone might actually deliver their order. And then governments like the UK’s deciding it would be politically “clever” to crash important areas of UK/EU trade by changing a 50-year system overnight, in pursuit of Brexit.

The scale of the Supply Chain issue is only now starting to be revealed under the pressure of the pandemic. It is already clear there is no going back to where we were. And it will take years, not months, to work through all the issues as we move into the New Normal.

The good news is that companies can now reshore using digital, continuous & biotech-enabled technology – equipment such as produced by NiTech (where I am chairman). It operates on the right scale, and is safer, greener, faster and cheaper than the old technology it replaces.

One other fact is also clear. The people and companies who focus on sorting out today’s mess, and helping us to return to a simpler, more robust system, are going to make an awful lot of money.