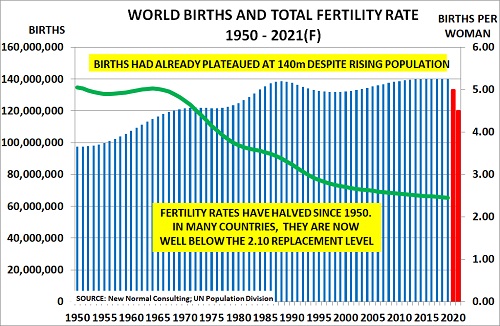 A year ago, many were suggesting the lockdowns might produce a “baby boom” as couples spent more time together. But early data suggests the world is instead seeing a “baby bust”. As Nikkei Asia reports:

“Births (in December/January) have fallen between 10% and 20% in such countries as Japan, France and Spain — and even more in some areas – exacerbating a widespread downward trend in fertility. This has sparked concern about whether these economies will be able to grow and maintain their social safety nets should the declines continue.”

And as the Wall Street Journal reports, working mothers have been particularly impacted by the pandemic, as they have often taken on the majority of home schooling responsibilities:

“After a brutal year of layoffs, parenting struggles, and juggling jobs and schooling under one roof, many working mothers are trying to regain their career momentum—and hitting new obstacles.”

The pandemic is acting as a catalyst, accelerating existing paradigm shifts:

The trend is most advanced in the world’s major economies, where fertility rates now average just 1.64. It is nearly 50 years since they were last above the 2.1 replacement level in 1973.

Most major economies today now have ageing populations. And the Perennials 55+ generation are essentially a replacement economy, as they already own most of what they need.

The pandemic-related jobs crisis amongst young people is a key factor in the ‘baby bust’, as the IMF chart confirms:

As the New York Times reports, young women are being particularly impacted due to their roles as care-givers:

“Many thousands, possibly even millions, are postponing their education, which can delay their entry into the work force.”

There is, of course, a 9 month gap between conception and birth, so we can already be fairly sure that 2021 will see a further fall in births. And nothing much seems likely to change in 2022, given the problems facing young women and working mothers. 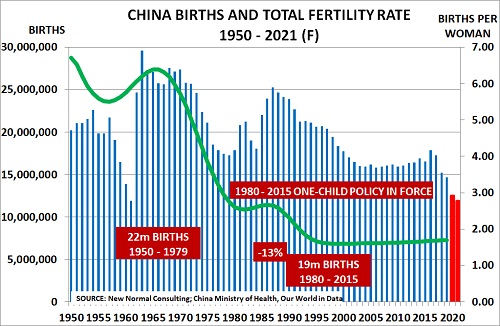 North East Asia is a good role model for the outlook, as it has the oldest populations in the world.

Demographics are destiny. Companies and investors who focus on the implications of today’s ‘baby bust’ for their business will be the Winners, as today’s New Normal world develops.