The pandemic was very good news for some companies, with demand for online activities rocketing. But whilst many parts of the developing world are still suffering, most developed countries are now starting to reopen as vaccinations spread. Western companies are now struggling for chip supplies, due to their lack of local investment. The Chinese market is meanwhile moving rapidly to 5G, with competition also intensifying in the high-end $500 market as companies start to attack Apple’s dominance in this segment.

The chart updates as usual on quarterly performance in the smartphone market.  As I noted in February, the market is continuing to become more complex as demand patterns change. In the part, it was often a case of “a rising tide lifts all boats”. But that is no longer true:

But now the chip shortage is starting to bite, As Samsung’s mobile chief has warned:

“There’s a serious imbalance in supply and demand of chips in the IT sector globally,” which means the launch of a new Galaxy Note smartphone may be delayed into 2022.

Similarly, Apple are being forced to stagger the release of some iPhones.

The problem is that the USA now produces only 12% of world semiconductors, down from 37 % in the late 1990’s. It has also fallen at least 2 years behind Asian manufacturers such as TSMC in the production of the highest grade chips. The reason, of course, is that companies chose to outsource production to Asia, so as to be able to boost share buybacks by cutting R&D spend.

But now the position is set to change with President Biden focused on the need to “build back better” after the pandemic. As new Intel CEO Pat Gelsinger told CBS’s ’60 Minutes’:

“We will not be anywhere near as focused on buybacks going forward as we have in the past. And that’s been reviewed as part of my coming into the company, agreed upon with the board of directors.” 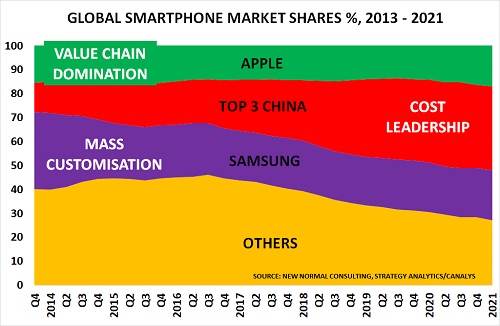 But while the West is in “catch-up mode”, Chinese producers are moving ahead quickly. US sanctions have hit Huawei badly, but other Chinese companies have quickly taken their place. And they have been driving forward on the shift to 5G.  350m smartphones have now been sold, as operators focus on upgrading their subscribers from 4G.

As the chart shows, Chinese companies are focused on the Cost Leadership segment. Vivo, OPPO and Xiaomi have been very successful in selling phones priced below $300 (Rmb 2k) – showing growth of 79%, 65% and 75% respectively. But they are also moving up-market as Canalys note:

“The real battlefield is in the high-end (US$500 and above) segment. We cannot overlook how fast Oppo, Vivo and Xiaomi are catching up in this lucrative segment with their competitive flagship portfolios. Succeeding in the high-end segment not only bolsters Oppo, Vivo and Xiaomi’s brand profile with high-end consumers, but it also drives higher service revenues, which are becoming a critical income stream for these companies.”

The results once again confirm the major changes taking place in consumer markets around the world, where “one size no longer fits all”.

PREVIOUS POST Oil markets, OPEC, enter the endgame for the Age of Oil
NEXT POST ACS Chemistry & the Economy webinar on Thursday