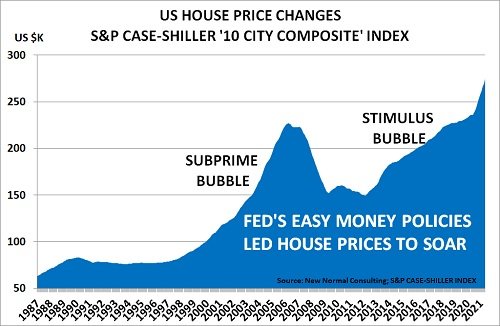 Last month saw the beginning of the end for the central banks’ 20-year experiment with stimulus. They thought they could overcome demographic pressures from ageing populations by printing bucket-loads of money at zero interest rates to support housing and stock markets. Now they are finally realising this was wishful thinking.

The policy reversal began with an unprecedented letter from Senator Joe Manchin to US Federal Reserve chairman, Jay Powell.  He called on him to stop the Fed’s stimulus program which he said was causing:

Clearly, the White House was seeing rising concerns among voters over the impact of house price speculation – and next year’s mid-term elections are getting closer. Plus, of course, President Biden is focused on supporting families rather than the stock market – as he told Congress in April:

“Trickle-down economics has never worked. It’s time to grow the economy from the bottom up and middle out”.

And Federal Reserve Governors soon began to fall smartly in line with the new focus. Eric Rosengren from Boston was the first to go public, calling for the Fed to stop buying $120bn/month of Treasury bonds and mortgage as these were:

“Mostly helping drive up the prices of interest-rate sensitive goods such as homes and cars. Home prices are rising at the fastest pace in nearly 20 years.”

James Bullard from St Louis was next, and highlighted the depth of the policy reversal now being considered:

“The whole point of asset purchases is to keep longer-term interest rates lower than they otherwise would be, in order to influence interest-sensitive sectors. And if there was ever an interest-sensitive sector, it’s housing. And so you’re getting this rapid increase in prices. I think you’ve also got an aspect of this where you’re freezing out new homebuyers and homebuyers that might be at the lower end of the income distribution, and they’re getting priced out of the market. So it’s not clear to me that we’re really doing anything useful here.” (my emphasis)

This is a quite amazing shift.  The Fed, after all, refused to consider any alternatives to stimulus even after the disaster of the subprime crisis in 2008. It was no unforecastable ‘black swan’ event – after all, even I had been forecasting it here and in the Financial Times. And when the pandemic arrived, they simply did more – taking their balance sheet from $865bn in 2007 to an astonishing $8.3tn today.

The chart highlights how they have taken house prices to the stratosphere over the past 20 years (based on the US Case-Shiller 10-City Index):

Instead, they have been buying – as during subprime – on the basis that prices will never fall. So they only focus on how to afford the interest payments each month. They assume that prices will always rise – and so the capital will never need to be repaid. 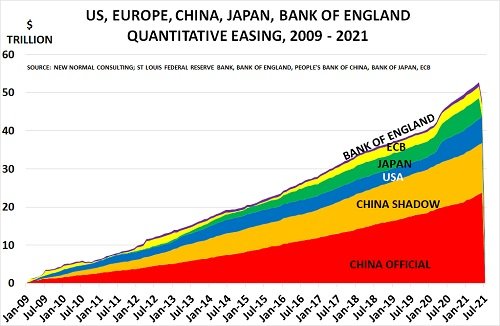 Sadly, the USA was not alone in using stimulus to turbo-charge house and stock prices, as the chart shows. Total stimulus spend has now reached $50tn since 2009.  China has been “subprime on steroids” as I have noted here and in the Financial Times in the past. Europe has a similar problem due to the European Central Bank and Bank of England’s stimulus policies.

Groupthink around the effectiveness of stimulus has dominated central banks for the past 20 years. It will therefore likely be a long and painful journey back to ‘normality’. The problem is that a whole generation has been taught that house and stock prices can only rise. So there will be lots of ‘false bottoms’ before prices finally reach a stable value.