Home Blogs Chemicals and the Economy Industry now needs to step up, if Net Zero is to be achieved 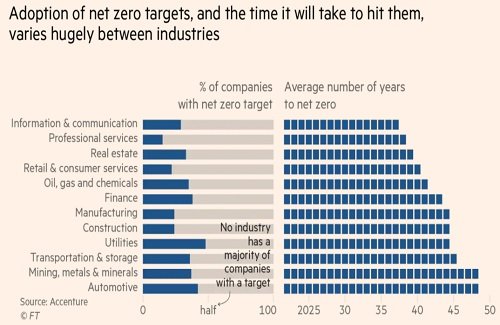 Net Zero is clearly the key issue of our time. With COP26 about to start, 3 key elements need to come together to ensure success.  Political leaders have to agree to meet the Net Zero targets, and to provide $100bn/year to help poorer nations fund the changes needed. But nothing will happen on the ground unless companies then adopt their own Action Plans to meet the targets.

The urgency of the issue is clear, as the US special envoy John Kerry noted last month:

“If we are going to hold the rise in the Earth’s temperature to 1.5 degrees, we must reduce emissions significantly between 2020 and 2030. This is the decade of decision.”

Behind the scenes, it is also clear that progress is being made by the main players. As Diederik Samson, chef de Cabinet for chief EU negotiator Frans Timmermans has noted:

“A month ago, it seemed that we were racing at high speed into a brick wall. But since then, we have found a small door in the wall. Now we have to find the key to open it.”

Neither of the first two objectives are easy to achieve.  But it does seem that the G20 are likely to agree to take “immediate action to keep 1.5 degrees within reach”. And the 3 main players – the EU (plus UK), USA and China – have reasonably aligned agendas:

There also seems to be movement on the second issue, providing support for the transition in the coal-based Emerging Markets. If they continue with a ‘business as usual’ scenario, there is little chance of reaching Net Zero by 2050, whatever progress is made by the 3 major players.

Essentially the West and China are now adopting a ‘carrot and stick’ approach:

But none of this will matter unless companies move on from talking about Net Zero to doing something about it. As Queen Elizabeth noted of the politicians last week:

“It’s really irritating when they talk, but they don’t do.”

The key Next Step is for boards to now set Net Zero targets, based on the International Energy Agency’s detailed transformation path.  It highlighted:

“The transformation period is a wonderful opportunity to reset the clock and start a new race”.

And so the key Next Step is for businesses to introduce Challenge Workshops for their key staff, to develop the new business models and strategies that are required for success.