Sustained collapse in oil prices: Effect on petrochemicals and the global economy 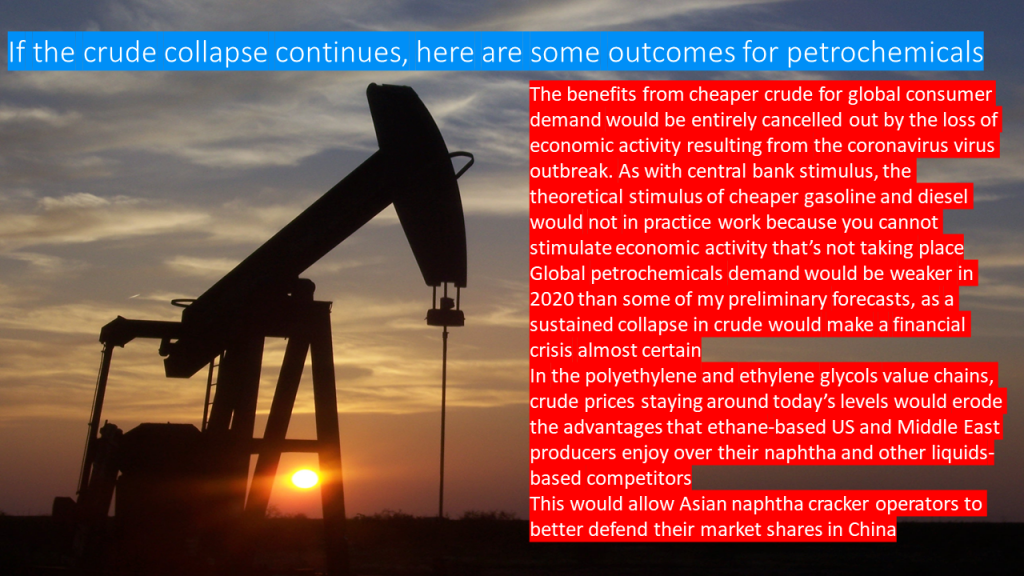 IT COULD be a game of chicken designed to pull Russia back to the negotiating table and the Saudis might win the game. This is how you could be interpreting the Saudi decision to raise oil production and offer aggressive discounts to customers following last week’s failure by OPEC to agree cuts in supply.

The Russians will be forced back to the table because of pressure from a potential big rise in budget shortfalls that will threaten big spending plans designed to counter falling living standards, is the argument for the chicken game. This morning’s collapse in the crude price to $30/bbl will also pile pressure on a Russian economy already struggling from a forecast $10bn fall in exports to China, a result of the coronavirus crisis.

Those with a one-dimensional mindset will be encouraging everyone in their petrochemicals companies to assume that this is the only possible outcome – and that crude prices will soon return to the “Goldilocks” range – not too high and too low – of $50-50/bbl.  Please be careful of only listening to these views as this would undermine your crisis planning process.

What you should have already prepared for, if you had been listening to the analysts who can often see round corners and don’t just repeat consensus markets views, is that today’s events in energy markets have been a long time coming.

Forecasting oil prices is a less reliable science than alchemy. But petrochemicals companies are way behind the curve this morning if they have only been planning for $50-60/bbl oil prices and haven’t built in contingencies where prices stay at this morning’s level of $30/bbl.

Why might this either not be a game of chicken or a game that Saudi Arabia could lose? Here are some important considerations:

On the demand side of the equation, there are also strong arguments to made for the crude bear market continuing.

The demand shock is of course coronavirus and what this means mainly so far in China, the world’s biggest consumer of crude oil. You could assume that China is pretty much back at work, but that would be a dangerously one-dimensional assumption given the risks of a secondary rise in the rate of infections and the fact that millions of people in China are stills subject to quarantine restrictions.

What we already know is that the damage to Chinese crude demand is significant enough to place downward pressure on oil markets for the next few months at least:

Nobody knows the extent of the demand shock elsewhere. But even assuming that China is fully back to work and will stay back at work, it is sensible to plan for the virus spreading further overseas. This would result in sharp reductions in automobile, plane, bus and train journeys, along with weaker consumption of all the things made from oil, including obviously petrochemicals.

On the spread of the virus, what alarmed me over the weekend was reading this article in The Economist. The magazine wrote: In America a quarter of employees have no access to paid sick leave and only scattered states and cities offer sickness benefits. Often the self-employed, a fifth of Italy’s workforce, do not qualify. One study found that, in epidemics, guaranteed sick pay cuts the spread of flu in America by 40%.

Much of the analysis has been on how healthcare systems in the developing world face the highest risk. But if people in America and Italy etc. are reluctant to self-declare and go into quarantine because of these type sick-pay provision issues, then think of the outcomes.

I don’t want to spread unnecessary alarm. Let me therefore balance this quote from The Economist with a statement of hope: If developed-world governments respond in the right way with enough investment in prevention and treatment the virus will be quickly contained. They should take a leaf out of China’s book as it has done nothing short of an awesome job. But it would be wrong of me not to highlight the risks in order to help you with realistic scenario planning.

Implications for the petrochemicals industry

At a macro level, the collapse in oil prices if sustained could add momentum to the rout in stock markets. I’ve been warning about such a rout for several years. I have long believed that a global recession could morph into a financial crisis because of the huge (and I mean huge) growth in global debts since 2009. As I wrote two weeks ago:

It is horrible, it is awful, that the catalyst [the coronavirus outbreak] is inflicting a loss of life. But it is what it is. We need to get on with planning and mitigation. This will require some hard-headed realism – for instance, deep cutbacks in operating rates and the postponement, or even cancellation, of new investments.”

Now we have the added potential catalyst of the collapse in oil prices and what that means for global stock markets and debt repayments.

If the oil price collapse is sustained. to repeat again, as this is so important: The benefits from cheaper crude for  consumer demand would be cancelled out by loss of economic activity resulting from the virus. As with central bank stimulus, the theoretical stimulus of cheaper gasoline and diesel would not work because you cannot stimulate economic activity that’s not taking place.

Global petrochemicals demand would be even weaker in 2020 than some of my preliminary forecasts  as a global recession also became a financial crisis.

Note that a substantial portion of global debt is in the oil patch. As the Wall Street Journal wrote in January: North American oil-and-gas companies have more than $200 billion of debt maturing over the next four years, starting with more than $40 billion in 2020, according to Moody’s Investors Service. The journal said it was unclear how this debt would be repaid.

How would the seizing-up of debt markets as a financial crisis effect the US petrochemicals producers on a standalone debt basis – and on the basis that some producers are integrated upstream into US shale oil and gas production? I don’t have the answers. Watch this space, though.

In the polyethylene (PE) and ethylene glycols (EG) value chains, crude prices staying around today’s levels would hugely erode the advantages that ethane-based US and Middle East producers enjoy over their naphtha and other liquids-based competitors.

Naphtha cracker operators would see their variable cost positions improve, with the US and the Middle East facing the added disadvantage of a lack of container freight space to move cargoes to China – a result of the logistics disruptions caused by the coronavirus outbreak. And where container space is available, on some routes its cost has gone up.

The US would struggle to gain any advantage in China from last month’s decision by Beijing to allow Chinese importers to apply for exemptions from the 25% additional import duties imposed on US high-density PE and linear-low density PE. The duties have been levied since August 2018,as part of the US/China trade war.

Asian naphtha cracker operators would therefore be in a better position to defend their market shares in the critical Chinese market.

As soon as the ink is dry on this blog post, oil prices may have bounced back, because, as I said, forecasting crude is a less reliable science than alchemy.

PREVIOUS POST Coronavirus: No recovery in petrochemicals likely until end-2020 and here are ten reasons why
NEXT POST Despite China returning to work, polyethylene growth prospects continue to decline