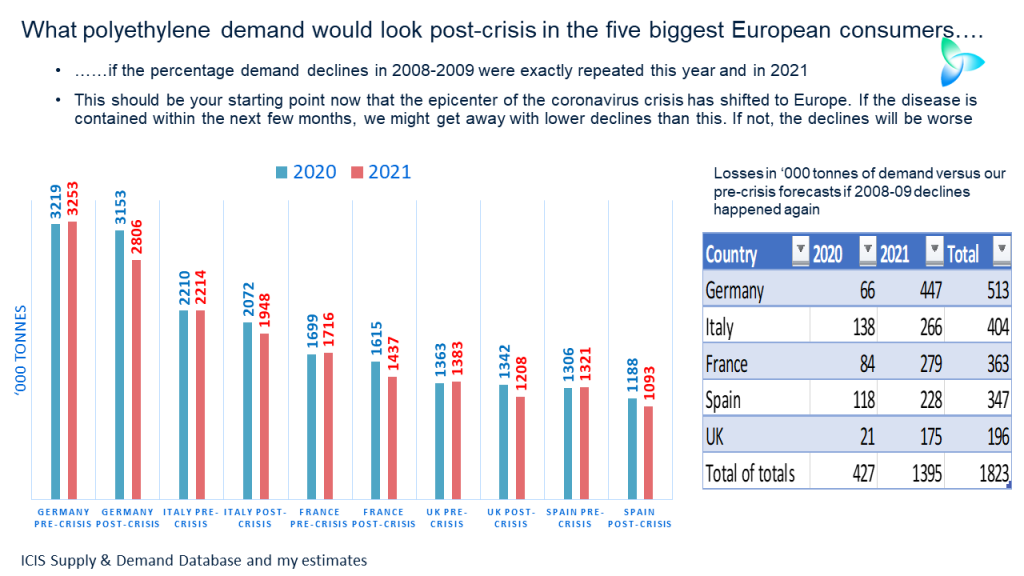 NOW that the epicentre of the virus has moved to Europe, we need to think through what this means for the region’s petrochemicals demand.

As usual, I am going to focus on polyethylene (PE). But what follows can also be applied to other polymers that are heavily used in packaging applications such as PET film and bottle grade resins, expandable polystyrene and general- purpose polystyrene. To a lesser extent, also, what follows will apply to the smaller portion of polypropylene demand that goes into packaging.

Your most important takeaway from this post is this: Ignore talk about any sustainable benefit to European PE demand, or indeed demand anywhere, from panic buying of food and other necessities. This is temporary stock-building which will be followed by destocking once panic buying comes to an end.

If the crisis ends in the next few months, we might see just one cycle of panic buying followed by destocking. If it continues for longer than that, we might see several cycles. But each cycle will deliver a lower and lower temporary boost to demand because of the increasing loss of overall economic activity.

China, which now seems to have the virus under control, serves as a good example of how the virus is delivering other forms unexpected support for demand (we in general need study what happened in China and apply this to the rest of the world).

China saw a boost to demand for high-density PE injection grade and linear-low density PE films for packaging food delivered to people’s homes, when hundreds of millions of people were under quarantine. Demand also benefited from extra layers of LLDPE shrink film used to wrap finished goods, the result of increased hygiene standards.

We can reasonably expect these benefits to take place Europe – along with other benefits from the virus that I haven’t been able to identify.

But demand for packaging materials was still down by 50% in China in January-February on a year-on-year basis, say industry sources. This was because of the almost complete cancellation of the Lunar New Year (LNY) Holidays. The LNY is the strongest demand season in China.

We should not underestimate the impact on European PE demand of no July-September holiday season in 2020 and the postponement or cancellation of sporting events, concerts and conferences – as well as the closure of schools, offices and factories.

“How on earth do I even begin to estimate these effects given the levels of uncertainty?” This is a natural human reaction sure.  But petrochemicals companies must estimate and re-estimate, they have to plan properly in order to take maximum advantage of surges in demand for certain grades of PE without overproducing as destocking kicks in.

Equally important is a sensible range of long-term sales and operating rate targets based on a range of least to worst-case scenarios.

A starting point for measuring the impact on European PE consumption is our ICIS Supply & Demand Database (this also applies to all other regions and countries). In the best-case outcome, declines in consumption will be lower in tonnes than during the 2008-2009 Global Financial Crisis; in the worst case, declines in demand will exceed what we saw during the crisis.

The chart shows the ICIS pre-crisis forecasts for demand in 2020 and 2021 for each of these countries. I then show what demand would look like if the percentage declines we saw in 2008-09 were exactly repeated in 2020 and 2021.

The table on the right of the chart right shows what this would mean in terms of lost tonnes of demand. For this graph and table, I’ve used thousands of tonnes rather than my usual millions of tonnes in order to make the differences easier to identify.

These numbers will obviously be wrong as we’ve never seen the history of demand exactly repeat itself in this fashion. But is an important starting point for your business planning. For more help, contact me at john.richardson@icis.com .

There is an extra layer of complexity which haven’t had time to think it through. This is how European PE import and export flows will be affected by the crisis. Watch this space for later blog posts on this theme.

Finally, on a personal note, please take care out there. My best wishes go out to my friends, my contacts and their friends and families. We can navigate this crisis together.