Global polyethylene demand in 2020 could fall by 3.3m tonnes, cost curve analysis turned on its head 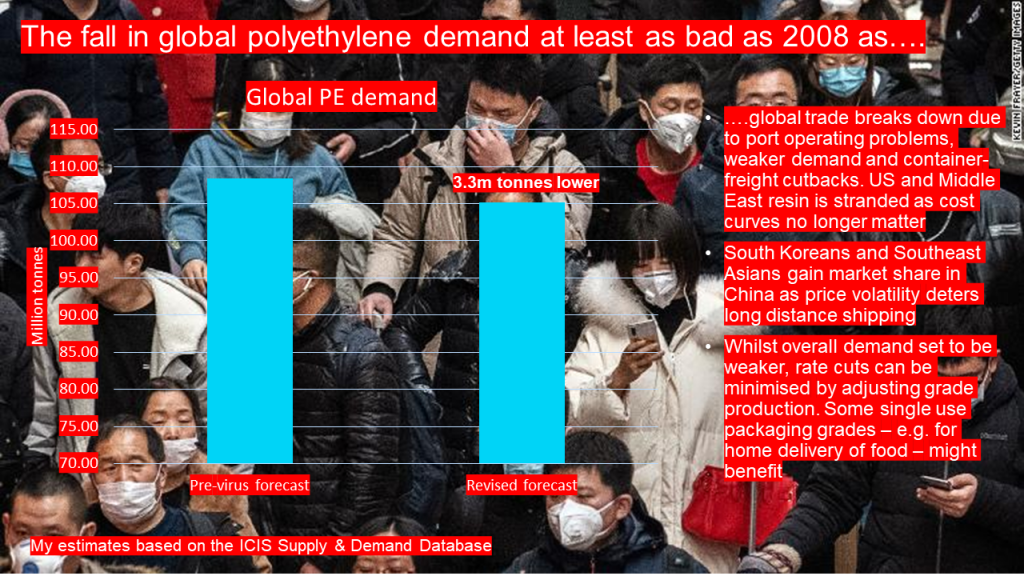 NOTHING that’s happened over the last few days that should surprise anyone who has been following my blog over the last few years. What was obviously impossible to forecast was the timing and nature of the catalyst. As I wrote on Monday:

It is horrible, it is awful, that the catalyst is inflicting a loss of life. But it is what it is. We need to get on with planning and mitigation. This will require some hard-headed realism – for instance, deep cutbacks in operating rates and the postponement, or even cancellation, of new investments.”

Sadly, even up until two weeks ago, some people in the petrochemicals industry were still in denial because they weren’t crunching their numbers. It was still being assumed that if China brought the coronavirus outbreak under control in Q1, this would lead to a swift rebound in its economy as huge stimulus from Beijing kicked in.

This would, it was being argued, result in China achieving annual GDP growth of around 5.5%. But as Nuriel Roubini points outs, even a realistically-sized V-shaped recovery after Q1 would still mean China’s annualised GDP growth in 2020 would fall to 2.5%.

Two weeks ago it was thus already clear that Chinese petrochemicals demand lost in Q1 could not be recovered later in the year – i.e. the 3m tonnes downside I forecast for 2020 Chinese polyethylene (PE) growth versus my old base case.

Now of course the crisis has gone global. To repeat again – as it is so important that companies do the right kind of contingency planning – this is the recent warning from an IMF task force:

A global recession is now inevitable. A financial crisis is also very possible.

Central bankers cannot replace the enforced loss of economic activity as the world struggles to contain the virus. Cutting interest rates will make little difference if factories and schools are shut down and millions of flights have been cancelled.

There is a good parallel here with the 1973 OPEC oil embargo, when crude exports from the Middle East stopped to the West. You must plan for lower petrochemicals growth than you had forecast for 2020 – and very probably negative growth.

As Richard Quest said on CNN this morning, it now doesn’t matter if China fully gets back to work in Q1, as it won’t have enough people to sell to because the virus has gone global.

Looking at just one polymer – PE – here is my assessment of what lies ahead.

Global trade flows could seize up because of the cutbacks in container traffic as activity at ports across the world slows down due to a lack of demand and quarantine measures. Container freight companies will make cutbacks on shipments, making it harder for PE producers to move product around the world.

This may make conventional cost curve analysis redundant. The US and Middle East feedstock advantages might not matter as resin in these regions could become stranded.

If you think that this is an exaggeration then consider what’s already happened with US-China PE shipments,

Normally, container freight rates from the US and China are very competitive because of the strong flow of finished goods from China to the US. This results in plenty of container space looking for cargoes for return journeys back to China.

But because of the sharp drop in Chinese manufacturing, the major freight lines have cut China-US shipments. This has led to a shortage of containers to send PE back the other way – from the US to China.

This is preventing the US from taking advantage of Beijing’s recent decision to allow importers to apply for exemptions from the 25% trade-war tariffs on US high-density PE (HDPE and linear-low density (LLDPE).

Now imagine these kind of container freight disruptions on a global scale, affecting just about every route.

Even the US and the Middle East might have to cut back on production. So don’t expect my earlier estimates of US PE exports for 2020 to be accurate. I am sure that these will need to be revised down. For the historic record, they were 3.8m tonnes of total HDPE exports, 4.6m tonnes of LLDPE and 1.5m tonnes of low-density PE.

We had earlier forecast that Chinese HDPE production would rise by 15% in 2020 over last year to 8.9m tonnes. This won’t surely happen now because of lack of feedstocks from refineries and a lack of demand. I also cannot see how China will be able to reach our earlier estimate for 2020 LLDPE production – an 8% increase to 13,3m tonnes. In the case of LDPE, we had expected a much more modest rise of 1% to 2.9m tonnes.

Because of a sharp drop in Chinese demand and the seizing-up of global container shipping, exporters probably won’t be able to take big advantage of the shortfalls in Chinese production.

China will still of course be able to import PE. Expect more imports to come from destinations closer to home than the US and the Middle East, as pricing volatility will make long distance shipping very risky. The South Koreans and Southeast Asians could make market share gains.

Monitoring cashflows and credit risks will be critical, as was the case in 2009. Be very careful of feedstock purchases and make sure you categorise your customers according to low, medium and high credit risks – and keep reviewing these risks. Some converters may not survive.

Also look at your mix of grades. Infrastructure work will grind to a halt and so expect a sharp drop in HDPE pipe demand. But single-use packaging demand will receive some support from more deliveries of takeaway food to people’s homes across many countries as quarantine restrictions spread, as is the case in China.

This will be for instance good for HDPE injection grades that go into rigid food containers, and for LLDPE and LDPE food-packaging films.

In China, the LLDPE/medium-density PE shrink wrap market is said to be booming because of heightened hygiene standards. Durable and non-durable goods are being wrapped in thicker layers of film – and sometimes also multiple layers of film, to prevent coronavirus from spreading. As with more deliveries of food to homes, this could now become a global demand driver.

A study into the changing nature of PE end-use demand will allow you to achieve the optimal grade switch. I have just scratched the surface here, as there are so many known unknowns and unknown unknows. This kind of study is essential if you want to minimise cuts in operating rates.

And remember, as I said, that markets will become much more regional. In addition to the extra opportunities for the South Koreans and Southeast Asians to export to China, European PE producers might face less competition from the US.

But they will have to very carefully match production to weaker demand. The Europeans will face the added problem of the fall in feedstock availability from refineries due to a big dip in consumption of gasoline, diesel and kerosene as all but essential travel stops. The same issue will apply to crackers in other regions dependent on feedstock from refineries.

The sharp slowdown in international trade raises challenges for countries with very little or no PE production. Think of Turkey and Vietnam as examples. They could face difficulties in importing enough resins.

On global PE demand, I had earlier forecast that 2020 demand would in the very worst case be 2.4m tonnes lower than in 2019. That would have been a 2.2% reduction. But this was when the crisis was mainly limited to China. Whilst some grades might benefit from the crisis, overall demand has to be down because of the problems with the overall economy.

Now I cannot see any reason why PE demand will not be as bad as in 2008, when it contracted by 3% over the previous year. Assuming that this happens again, this year’s consumption would be 3.3m tonnes lower than in 2019. Demand would be 6.5m tonnes lower than my original pre-virus forecast for 2020.

When this crisis is over, and hopefully very soon, the No1 lesson to be learned is that the petrochemicals business cannot be viewed in isolation from the big macroeconomic trends that have been evident for many years – debt and demographics.

Too much demand analysis has been built round intellectually easy and wrong slogans such as a “rising Asian middle class”. Macroeconomic thinking instead needs to be brought in-house and must be more complex and scenario-based in order to better prepare for events like this.

Finally, on a separate point, ICIS in this together with our customers. We are your partners. Contact us and we can help.