Home Blogs Asian Chemical Connections Be very, very cautious about buying into the idea of a Q2 crude price rally 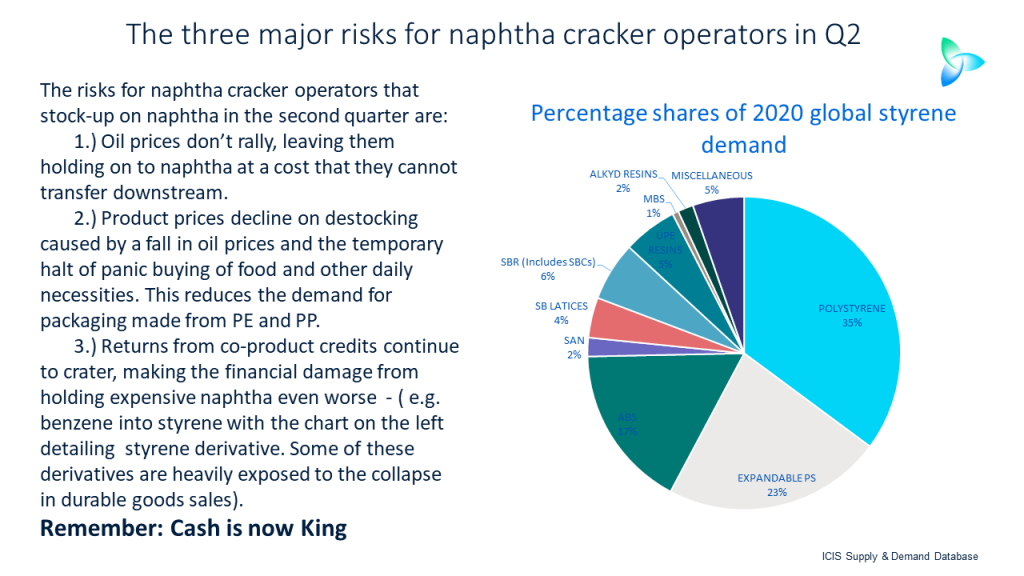 IT IS the unprecedented nature of the demand shock that’s the thing, regardless of how much Saudi Arabia and Russia might cut crude production. In the old world, big production cutbacks would often result in a sustained rise in oil prices.

But that was when there was normal demand. With some 3bn of the world’s population in lockdown with more to follow, cutting supply sufficiently to meet the new realities of demand would never be a finished task until the virus has peaked and business as usual returns. That may well take several more years.

More immediately, there are doubts over whether Saudi Arabia and Russia will reach any kind of production cut, despite President Trump’s comments yesterday that production cuts “could be as high as 15 Million Barrels. Good (GREAT) news for everyone!”

The problem with his statement that he said had already talked to Saudi Arabian and Russia about a deal whereas the Russians said that the president hasn’t talked to either party –  although Saudi Arabia’s state news agency announced that the kingdom is calling for an emergency meeting of OPEC.

The critical issue is, as I said, the ability of any cutback to address the oversupply in the market. As CNN writes:

This oil glut is creating a scenario where some obscure grades of oil already have actually dropped below zero. For instance, a Wyoming crude grade was recently bid at negative 19 cents a barrel, Bloomberg News reported last week.

Shrinking storage capacity means that oil producers in some cases have to pay someone just to take the barrels off their hands.

Back again to the issue of whether production cuts can be on a scale enough to cause an immediate and sustained rise in oil prices. As the International Energy Agency writes: At the moment, about 5 million barrels of oil produced worldwide each day is not fetching high enough prices to cover the costs of getting it out of the ground (based on Brent crude at USD 25 a barrel, with variations to reflect the prices typically available to producers around the world). These operations are now losing money on every barrel they produce.

The economics of getting oil out of the ground are not necessarily a good guide to which operations will actually halt production. Depending on how long they think the crisis will last, some of the more robust producers may continue pumping oil even if they are losing money. This could happen if the costs of shutting down production (and eventually starting it up again, if that proves possible) are higher than the operating losses from keeping the oil flowing. Moreover, some producers may opt to wait and see if weaker rivals go out of business, which would improve the environment for those who stay in the game.

Be ready for a Q2 destocking process

So, as I said on Wednesday, please be careful out there. Oil prices might very easily continue to decline towards $10 a barrel or lower, resulting in a petrochemicals destocking process up and down all the value chains as apparent demand collapses. This would be the result of destocking by those who bought petrochemical feedstocks and petrochemicals and polymers when crude was at $50 a barrel.

You must there exercise great caution. Do not overextend yourselves.

The three risks for cracker operators who stock-up on naphtha in the second quarter are: