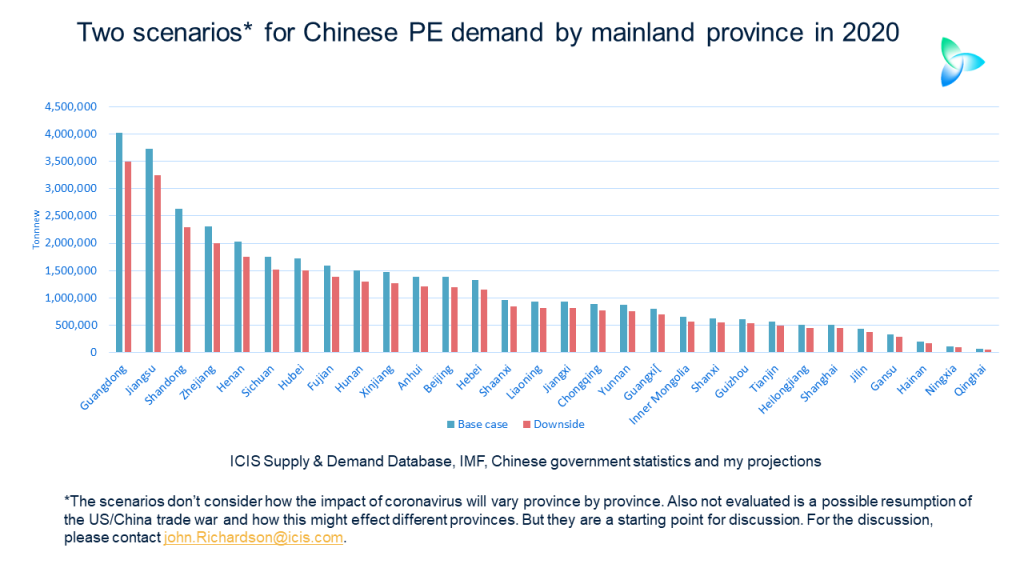 WHEN THE coronavirus crisis first hit China most of the focus was of course on Hubei province – the epicentre of the outbreak. One of the immediate effects was the collapse of petrochemical, automobile, steel, food processing and textiles production – the province’s biggest industries.

Wind the clock forward to last week and President Trump’s threat to reignite the US trade war with China. This mainly threatens the provinces of Jiangsu, Guangdong, Shandong, Shanghai and Zhejiang. Together they account for close to 33% of the country’s total industrial output and most of its merchandise exports.

Then think of our lack of knowledge about this disease and the threat this poses to China – and obviously also the rest of the world – as lockdowns are eased. This very important article from the FT is a must read. It estimates that 60% of confirmed cases in China over the last month were asymptomatic at the time of testing.

If a secondary outbreak takes hold in China, it could be an outbreak that proves hard to contain because of the number of asymptomatic carriers. Some provinces will quite obviously be worst affected than others. To argue otherwise would be the equivalent of suggesting that as the US also comes out of lockdown, all states would be evenly affected by any secondary outbreak. We all know this cannot be true.

These are the most recent justifications for digging deeper into China in order to calculate an approximation of petrochemicals demand at the provincial level. By doing so you can work out which provinces are most at risk from renewed trade wars and coronavirus and from there calculate the total China-wide amount of demand at stake. This approach also supports sales strategies – e.g. focusing on provinces that are forecast to be least-affected by trade wars and coronavirus.

Before the pandemic it was in my view clear that we should split China into effectively four different countries: The well-developed southern and eastern coastal provinces, the booming up-and-coming provinces adjacent to the richest provinces, the rust belt in the northeast with its fading old-style heavy industries and very poor far west China.

Why dividing China in this way matters is because the rich southern and eastern provinces are rapidly approaching saturation point. Their per capita petrochemical and polymer consumption are not far off the level of mature economies.

Meanwhile, the booming up-and-coming provinces are a long way from saturation point and so represent big growth opportunities for petrochemical businesses. So too is the case with poor inland China, but this region is a long-term bet.

You can only group China into these four different countries or regions if you know the data at the province level.

My final argument about why an attempt at province-level data is important relates to the importance of China as a driver global petrochemicals demand.

Every petrochemical you look as is the same: over the last 20 years, the role that China has played in global demand has greatly increased. Take polyethylene (PE) as an example. In 2000, China accounted for just 12% of global demand, but this year the ICIS Supply & Demand Database forecasts this will have risen to 33%. In 2009, China overtook North America to become the biggest consumer of PE globally.

Because China is such a critical market, we should attempt to come up with ball- park figures about provincial-level demand. These figures, no matter what approach we use, are likely to be wrong as China is such a vast and complex country. All the right data points may not be available.

But my personal view is that initial approximations of province-level demand, whatever their flaws, will help petrochemical companies better plan their tactics and strategies in the world’s most-important market. And as time moves along and as expertise improves, we will get better at these types of estimates.

What the above chart represents is my attempt at breaking down PE demand in China by province, using the ICIS Supply & Demand Database, IMF data on national and provincial per capita income levels and Chinese government numbers on provincial populations.

I estimated 2020 per capita income per province by taking average provincial income growth in 2015-2019 and assumed that this would be repeated in 2020.

The chart shows two different assumptions on China’s total PE consumption by province in 2020 – our base case of 37m tonnes and my downside of 32m tonnes.

I then multiplied these provincial per capita income levels by the average per capita PE consumption in kg using the total nationwide demand forecasts of 37m tonnes and 32m tonnes. This gave me PE per capita consumption by province.

By multiplying per capita PE consumption by province by the population numbers, this resulted in demand per kg for each of the provinces. I then divided the figure by a thousand and this gave estimates of demand per province in tonnes.

Finally, I adjusted the totals, province by province, to bring them in line with the original headline nationwide demand forecasts of 37m tonnes and 32m tonnes.

This, of course, will be wrong because it doesn’t take into account inter-provincial trade and exports of PE. I have also made no attempt to adjust the data for how different provinces will be affected coronavirus or any resumption of the trade war as these are unknown unknowns.

But I hope this post helps get the debate going inside your company about how best to estimate province-level demand in China.  If you need support from ICIS in this type of scenario thinking, using our excellent data and analytics teams, please contact me at john.richardson@icis.com.