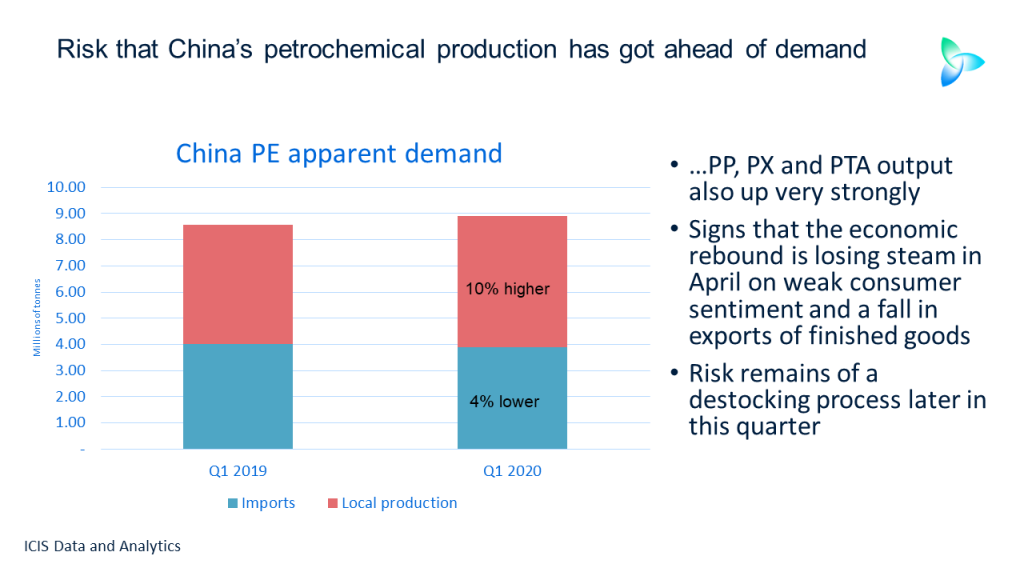 DON’T SAY I did not warn you. The post-coronavirus recovery in China is already losing steam in April after a rebound in activity in March, according to this Bloomberg article.

Domestic consumer sentiment is weak and export orders have collapsed as a result of the global pandemic, according to the wire service, which writes:

Weak demand and plummeting oil prices are dragging factory prices deeper into deflation, with Bloomberg’s producer price tracker at the lowest level since mid-2016. That slump will hurt the profits of many companies and thus damage investment and hiring.

This is in line with what I am picking up from my contacts in China who report that while factories are humming again with workers largely back at their posts, final end-user demand remains weak.

Operating rates up and down all the manufacturing value chains are said to be back at 80-90%. But one contact says that while most high-street shops have re-opened in Beijing, they are largely empty.

Back to the critical issue of exports. As I wrote earlier this month, and since then nothing has changed (I think nothing can change until we have found an effective vaccine, have distributed the vaccine globally and have ensured that enough people have taken the vaccine):

China’s export economy is basically gone. Over the rest of this year, other than serving medical and food packaging needs, its exports to the West will be vastly lower than in 2019. This isn’t a subject for debate, I am afraid. There is no scenario under which its exports of durable non-essential goods can be anything but much, much lower than last year.

The data on Chinese polyethylene (PE) and polypropylene (PP) production and imports in Q1 points in the direction detailed above: Apparent demand that I believe is ahead of demand.

The jump in PE and PP production on a year-on-year basis has been big, cancelling out what have in some cases been big falls in imports.

The ICIS production data also confirm my post last week when I predicted that China would run its petrochemical plants hard in order to:

Production data also show a big jump in paraxylene and purified terephthalic acid output despite weak polyester fibres demand for these same three reasons. I shall look at the latest developments in the Chinese polyester fibres chain in a later post.

Now let us look at the PE and PP data and consider what I think they mean for market direction over the next few months.

The biggest production surge of all was in linear low-density PE (LLDPE) where in Q1, local output was up by no less than 14% year on year. Meanwhile, net imports fell by 7%.

Add this together and local production was up by an average 10% cross the three grades, with average net imports down by 4%.

The story was the same in PP where local production rose by 10% in Q1. As with PE, new PP capacity appears to be coming on-stream on schedule. Net imports were 5% lower, resulting in a 7% rise in apparent demand.

The first-quarter 2.7% rise in PE apparent demand might seem very modest to you. But this feels high to me given the scale of the shock to the Chinese economy.

China’s Q1 GDP is likely to have seen an even deeper contraction than the official decline of 6.8%. That’s long been the nature of official government data in China.

This would be huge hole China has to climb out of it were to achieve positive growth for the full-year 2020, even without the headwinds of weak consumer sentiment and the collapse in exports.

Our base case is for a 6% rise in annual 2020 real PE demand to some 37m tonnes/year. But there is a risk of a downside to this forecast (real demand is apparent demand adjusted for inventory distortions).

PE is to some extent immune to declines in GDP growth as it is heavily used in food packaging and other daily necessities.

But LDPE and LLDPE films are also heavily consumed in wrapping durable goods for export. HDPE is used to manufacture not only packaging, but also water pipes, gas pipes and automobile fuel tanks.

Our base case for annual Chinese PP demand growth in 2020 is 3%. This suggests to me that the 7% rise in apparent demand in Q1 could point to overstocking.

Some 10% of PP globally is thought to be consumed in household appliances, 10% into automobiles, 13% into electronics, 13% into equipment manufacturing (white goods etc.) and 5% into construction.

This comes to a total of 51% versus 30% that goes into packaging. PP is therefore very heavily exposed to the collapse in demand for China’s durable goods exports. This again raises the possibility that China’s PP growth in 2020 will be less than our base case of 3%.

The more immediate takeaway from all this is: With oil prices likely to remain under a lot downward pressure, beware of the risk of destocking in China at some point in Q2, when China’s PE and PP production could prove to be in excess of demand.

PREVIOUS POST Post-coronavirus world: How China could end up in a stronger position
NEXT POST Coronavirus may have made China province-level petchems data even more important