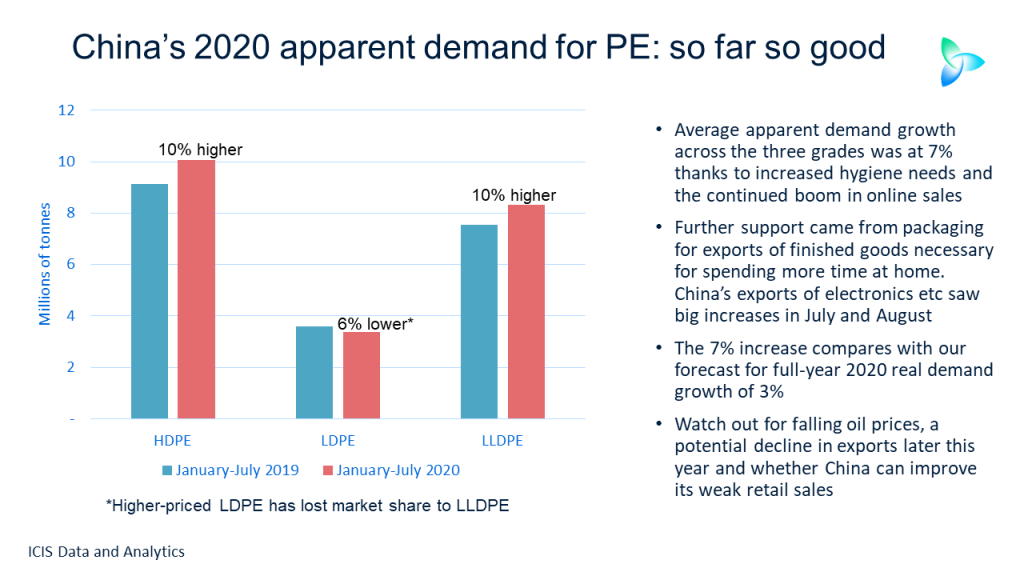 THE ABOVE chart, completing my analysis of supply and demand for China’s major petrochemicals and polymers in January-July, seems to indicate nothing much to be concerned about. If only the future were the same.

What you can see is an average increase of 7% in China’s apparent demand for polyethylene (PE) across the three grades in January-July, compared with our estimate for full-year 2020 real demand growth of 3%. This implies overstocking of some 620,000 tonnes in the first seven months of this year, assuming our full-year 2020 estimate is right.

But over the last few years, PE demand has exceeded expectations because of the packaging required for booming internet sales and the heavy restrictions, virtually a ban, on imported scrap or waste plastic that were introduced from January 2018. This has obviously boosted virgin polymers demand, especially PE as most scrap imports comprised PE.

Also consider the additional support provided to PE demand by increased hygiene needs. Think of the extra packaging, made from PE, required for disinfectant and disinfectant wipes etc. This is a global phenomenon.

There is a further factor which might mean that PE is not overstocked in China and that is the extraordinarily strong growth in China’s overall exports that we saw in July and August. I say extraordinary because nobody I have spoken to (and I speak to a lot of people), and nothing I have read, suggested this growth was going to happen.

We don’t need as many shoes because we are not travelling as much to the office or catching planes for business or leisure. But lots of new laptops are needed as we work more from home. Another driver of laptop demand has been for children studying at home.

As China’s exports of clothing and other manufactured goods related to travel have collapsed, there has been a more than reciprocal increase in its exports of the things we need for our new lifestyles.

How do the new laptops, mobile phones and office chairs arrive in one piece, mainly to customers in the West who can afford these lifestyle changes? By being packaged in polymers including linear low-density PE (LLDPE) films.

But watch out for oil prices

It would be, however, negligent of me not to point out the obvious: to some extent at least, strong apparent demand for PE in January-July was a response to rising oil prices as crude came off its record lows of mid-April.

The rise in crude helps explain why high-density PE (HDPE) and LLDPE net imports saw big increases in May and June. During the whole January-July period, HDPE net imports rose by 13% with LLDPE also 13% higher. This occurred despite HDPE local production increasing by 8% as domestic LLDPE output rose by 6%.

An important aside here is that average apparent demand growth was pulled down by low-density PE (LDPE) which saw a 6% decline in both net imports and local production.

This reflected tighter supply in LDPE during a period when LLDPE – which can be substituted for LDPE – is seeing major capacity additions. These additions are mainly in the US, but do not forget that China is also adding a lot of new LLDPE capability. We expect China’s LLDPE capacity to this year increase by 11%.

Back to oil prices. The risk I’ve have been highlighting since the April recovery began is now being realised. But how long the sell-off in crude will last is, as always, anyone’s guess.

Do bear in mind, though, that one of the biggest reasons why crude prices came off their record April lows was a big increase in Chinese imports. China was very intelligently taking advantage of the very low prices that prevailed before it placed its orders.

Here is the thing, though: because China’s crude inventories appear to be full, with local refineries increasingly having to resort to fuels exports to relieve stockpile pressure, there could be steep falls in September and October imports. China’s refiners may cut overseas purchases by as much as 40% during these two months, says Rebecca Babin, managing director and senior energy trader at CIBC Private Wealth Management.

And as we all know, oil prices slumped to their lowest level in nearly three months on Tuesday because of the stalling recovery in global demand and planned production expansions by OPEC. Also note that in the US, gasoline demand always declines after the Labor Day holiday and as local refineries move into their maintenance season ahead of the winter.

Clearly, therefore, regardless of the strength of China’s PE demand, a crude-driven destocking process cannot be ruled out. In my view, such a destocking process will have to happen at some point over the next few months because of the weak underlying fundamentals of the crude market. We may have reached this point already.

Could there soon be a global decline in demand for chairs and laptops needed to equip offices as homes and the laptops required for children to study at home? These are obviously infrequent purchases. We will eventually reach the point where kitting out homes as offices has been completed.

We need to consider the balance of PE demand gains in the developed world, assuming government support for lower-paid workers is maintained (see the next paragraph), versus losses of demand in the developing world as extreme poverty increases. When people are suddenly forced to live on less than $1.90 a day, they are unable to afford even the most basic of consumer goods packaged in PE.

Will Western governments be willing or able to maintain support for lower-paid workers at the unprecedented levels that we’ve seen since the pandemic began? US Congress seems to be not much closer to agreeing on a compromise package to replace the stimulus that ended at the end of July. In Europe, job-furlough schemes are being unwound. A recent study by the McKinsey Global Institute estimated that 59m workers in Europe—over a quarter of the entire workforce—are in jobs that are seriously at risk.

All of this matters for the export component of China’s PE demand, the 15-20% of headline Chinese consumption which is PE exported either as finished plastic products or as packaging.

Then comes the bigger slice of the pie, China’s local-for-local PE demand. What I believe has kept China’s petrochemicals markets quite healthy in January-July has been strong exports, as local retail sales during the same seven months were down by at least 10%. I say at least because retail sales include government spending in restaurants and shops. This spending should really be discounted to get to the real number.

The release of China’s retail sales for August should give us an idea of whether China has started to address its two-speed recovery, one which has favoured higher over lower-paid workers. Food price inflation eased back a little in August, but the longer-term trend of high food costs is another threat to local PE demand growth.

On the plus side of the ledger, increased hygiene needs that have supported PE demand since the pandemic began aren’t going to disappear anytime soon, either in China or elsewhere. We need to be realistic about the prospects for a globally administered and effective vaccine over the next 12-24 months. Until we reach this point, our new-found habits of more frequent handwashing and disinfection of surfaces etc will continue.

And, to what extent is China’s local PE growth divorced from increase or declines in GDP? The pattern over the last few years points to PE having a strong and separate momentum, driven, as mentioned earlier, by booming internet sales and the heavy restrictions on imports of scrap plastic.

Confused? You should be. Petrochemicals markets have probably never been as complex, volatile and uncertain.

What we must therefore do is work on better bottom-up demand models to estimate growth, petrochemical and polymer end-use application by application. We also need to take into account the variables of weak versus strong end-use sectors and weaker versus stronger countries – i.e. developed as opposed to developing countries and the extent to which individual countries rely on tourism. This is where ICIS can help.