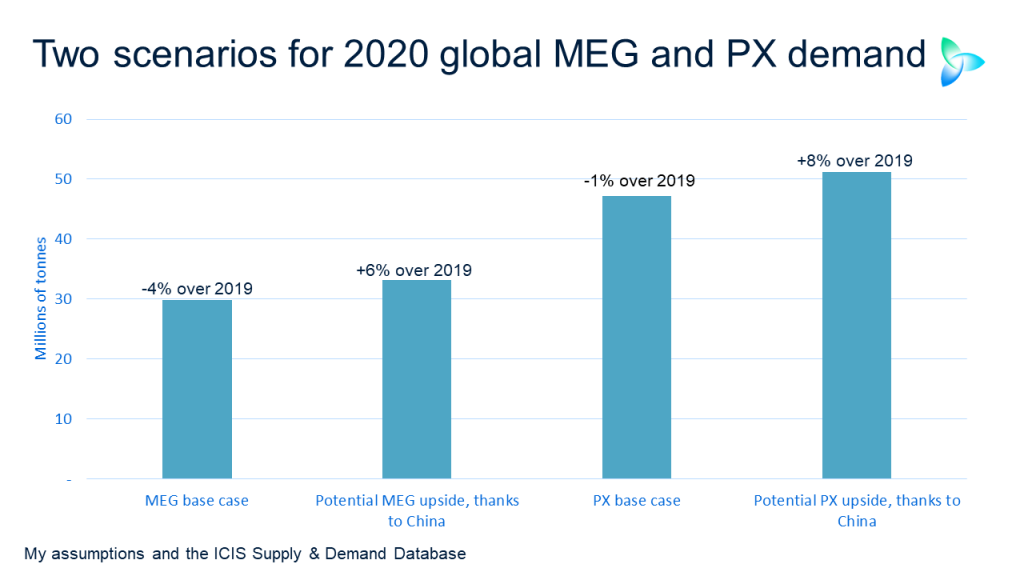 WOW yet again. China’s export-led economic recovery continues to support global petrochemicals demand growth. Our business looks set to enjoy a much better year in 2020 than nearly all us had imagined was possible back in Q1.

Here I only look at mono-ethylene glycol (MEG) and paraxylene (PX). But watch this blog and my LinkedIn feed for later charts covering polyethylene, polypropylene (PP), styrene monomer (SM) and other products.

Let me stress immediately, though, that the upside estimates you can see in the above chart are very preliminary. When we have made our final adjustments, 2020 may not turn out to be as good as the chart implies for a wide range of reasons.

But I believe that, whatever the final numbers, 2020 will still go down in history as a much better year than had been anticipated when the pandemic first broke out. The main cause of this is China’s voracious growth in exports of manufactured goods.

As this useful new online tool from the World Economic Forum shows, China has hoovered up global exports, gaining market share from other countries. This is partly because its factories were coming back online as factories elsewhere were shutting down due to the pandemic.

China’s break-taking growth in exports also reflects the last 19 years of history. Since China joined the World Trade Organisation (WTO) in 2001, it has added to what were already strong positions in just about every global manufacturing chain.

WTO membership removed the quotas and tariffs that had restricted China’s exports to the West. Of course, this enabled it to export bigger volumes, as China also leveraged what was then a very youthful population. A youthful population equals low labour costs.

This dominance of nearly all the global manufacturing chains also helps explain what has happened since May this year. It was from then onwards that Chinese factories started to pivot away from making the things that we do not need for our new pandemic lifestyles towards the things we do need.

So, whilst exports of bags and shoes used for travelling have hit the skids, losses in revenue have been more than made up through increases in Chinese exports of face mask and gowns, made from non-woven grades of PP and polyester fibres.

As we kit out our homes as offices, China’s exports of laptops, again made from PP and from the polymers of SM, have gone through the roof. So have exports of household appliances as we spend more time at home and for instance use our washing machines a lot more, hence more machines that need replacing. This has been further good news for PP and polymers made from SM.

The latest export data for October further confirm the above trends. Interestingly, also, there were signs in October of old style export growth returning, most notably in clothing, as spending patterns in the West edged a little closer to the Old Normal.

“What’s remarkable is the wide range of goods China is exporting. In October, China increased its exports of consumer goods, like toys and furniture, medical devices and high-tech goods,” wrote John W. Miller, in another of his excellent articles for Trade Data Monitor (TDM).

Year-on-year exports of garments and clothing accessories increased 6.8% to $13.2bn, added the article. Exports of home appliances increased 39.6% to $6.2bn and shipments of plastic products leapt 34.6% to $8bn. Exports of auto parts increased 18.8% to $5.5bn.

You must remember, however, that the domestic economy is still not back to where it was before the pandemic. Retail sales registered their first growth for seven months in September (the October retail sales data will be released next week). But January-September retail sales were still down by 7.2%.

Nevertheless, a partial recovery in the local economy, which looks set to continue until at least the end of this year, and strong export growth will make China a global economy outlier. China is the only major industrial nation expected to see economic growth this year. The IMF predicts China’s GDP will increase by 1.9% in 2020.

There are many risks ahead. Because lockdowns have increased in the West, there is danger that consumer sentiment will take a battering and spending on consumer goods will decline. At some point most of us will have kitted out our homes as offices. Spending on Chinese electronics will at some stage have to decline, as new laptops and office chairs are only purchased once every few years.

But it seems very possible that the Chinese economic recovery will continue apace during the remainder of 2020. The local economic recovery looks likely to continue as spending gradually returns to pre-pandemic levels. At least some Chinese exports seem set to remain strong – sadly, for instance, face masks and medical devices.

And hey, if I am wrong, petrochemicals exporters to China will say, “So what?” as their year to date has been extraordinarily good in the context of the pandemic.

Now let us look at the data behind the above chart in detail.

Booming rather than declining MEG

Just about all my contacts had expected Chinese MEG demand to crater in 2020, registering its biggest year-on-year fall in growth since records began. But in January-September net imports instead increased by 16%.

We don’t estimate local Chinese production on a monthly basis. But, if you look at our excellent ICIS Supply & Demand Database, you will find that we expect full-year production to increase by 4% over 2019.

If you assume that net imports for the whole of this year grow at 16% and add this to our annual estimate for local production, you end up with 2020 demand growth at 11%. This compares with our base case estimate of a decline of 1% (demand in China is assessed through net imports plus local production with adjustments made for inventory distortions).

China’s role in global MEG demand has hugely increased over the last 20 years. Back in 2000, China accounted for just 12% of global consumption, but this year we expect this to reach no less than 59%. This is largely the result of China’s growing dominance in global exports of clothing and non-apparel items such as sheets and pillowcases.

In terms of tonnes, if my estimate of 2020 Chinese MEG demand is right, local consumption would be 2m tonnes more than our base case. The global implications of this better-than-expected result would be nothing short of huge. Global demand would rise by 6% instead of our base case forecast for a decline of 4%.

Let me stress again that these are just preliminary numbers. Our dedicated and highly skilled team of analysts will next year produce the final, definitive numbers for 2020. But I do believe that the trend line is correct. Also, regardless of what happens during the rest of this year, consider the chart below: 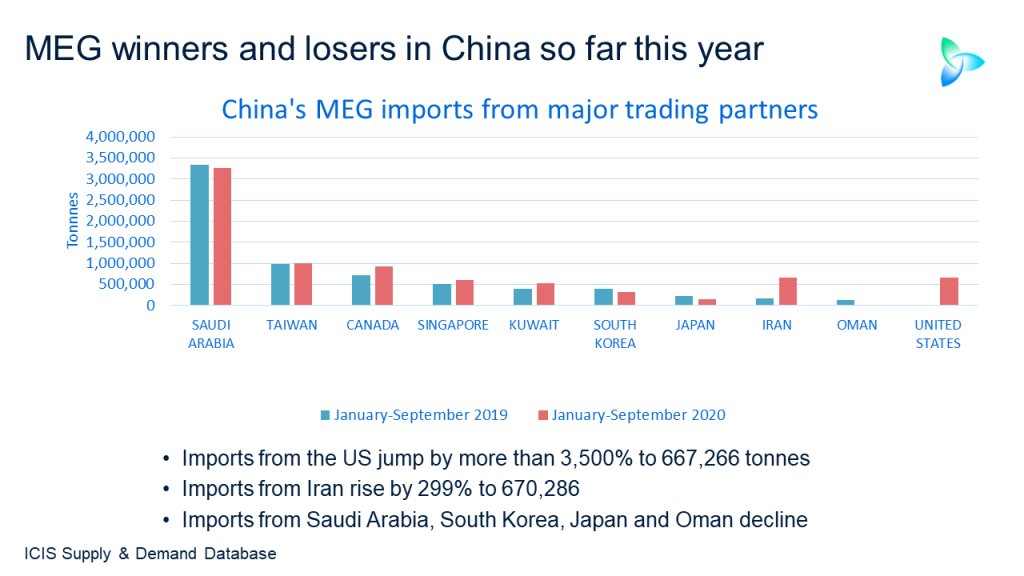 One of the biggest winners is the US. Big increases in US capacity have luckily coincided with strong Chinese demand and the removal of the 25% additional tariffs that had been imposed on US MEG by China as part of the trade war. The rise in Iranian imports aligns with China and Iran moving closer together economically and geopolitically. Iran is a key member of China’s Belt & Road Initiative.

Saudi Araba, South Korea, Japan and Oman lost ground, but events could have been an awful lot worse.

Paraxylene reckoning has been delayed

The story in PX, another of the fibre intermediates required to make polyester fibres, polyethylene terephthalate (PET) bottles and PET films, is even more remarkable.

Again, everybody I talked to during the first quarter had expected negative Chinese demand growth for PX in 2020.

But instead in January-September, year-on-year demand for PX (again net imports plus local production) rose by an astonishing 21%. This comprised a 62% increase in local production. I included imports from Brunei Hengyi Petrochemical’s 1.5m tonne/year PX plant in Brunei in this estimate. The plant, which came on stream late last year, is 70% owned by Hengyi – a Chinese purified terephthalic acid (PTA) producer.

Not surprisingly, January-September 2020 net imports were down by 14%. But, as just mentioned, this still averages out at a 21% rise in demand. If this continued for the rest of this year, 2020 Chinese PX demand would again rise by 21% compared with our latest base case forecast for an increase of 6%. This would leave consumption 4m tonnes higher than our base case.

In 2000, China accounted for only 8% global PX demand. This year, we expect China’s share to rise to 64%. Again look at the slide at the beginning of this post and see the effect of China’s upside on the global picture. Instead of global PX demand falling by 1%, it would rise by 8% if my upside for Chinese PX demand is realised.

I must once again stress that these are preliminary numbers. What we may see during the remaining months of this year is a slowdown in Chinese MEG and PX demand and end-of-year adjustments by our analytics team for Chinese overstocking. It also possible that there has been overstocking of finished goods imported from China because of concerns about further pandemic-related manufacturing disruptions.

But this would obviously not change the chart below. 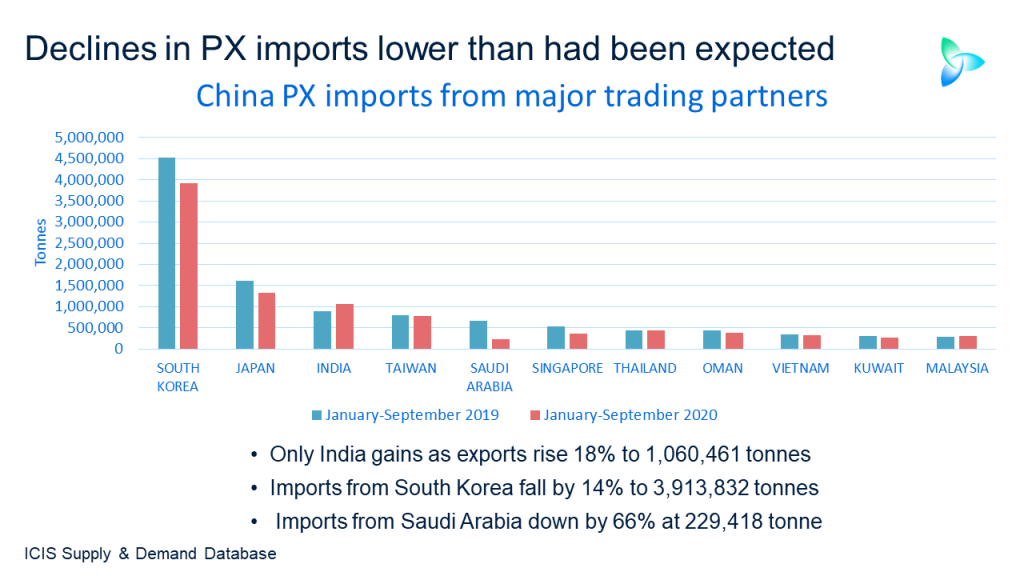 Only India gained market share with declines in imports from every other major trading partner. With capacity set to further increase in China next year, and with local plants likely to run at high operating rates, this year’s demand boom has delayed the reckoning. I still see China moving to complete PX self-sufficiency over the next three to four years.

But this chart is an awful lot better than had been expected just a few months ago.

What of next year for the petrochemicals business in general? China’s shift to self-sufficiency will continue, with the biggest impact likely to be on SM, PP and PX imports. Again, watch out for later posts where I will give you updated forecasts for next year’s imports.

China’s economy should be OK in 2021, however. I certainly hope so because, as all the above data once again illustrates, we really do have no Plan B. Our business models are essentially built on three things and three things only: China, China and China.

PREVIOUS POST Vaccines, petrochemicals demand and a much more complex world
NEXT POST No change in China's policies seem likely under a Biden and Harris White House