Politics and petrochemicals: Fifth Plenum review and the US elections 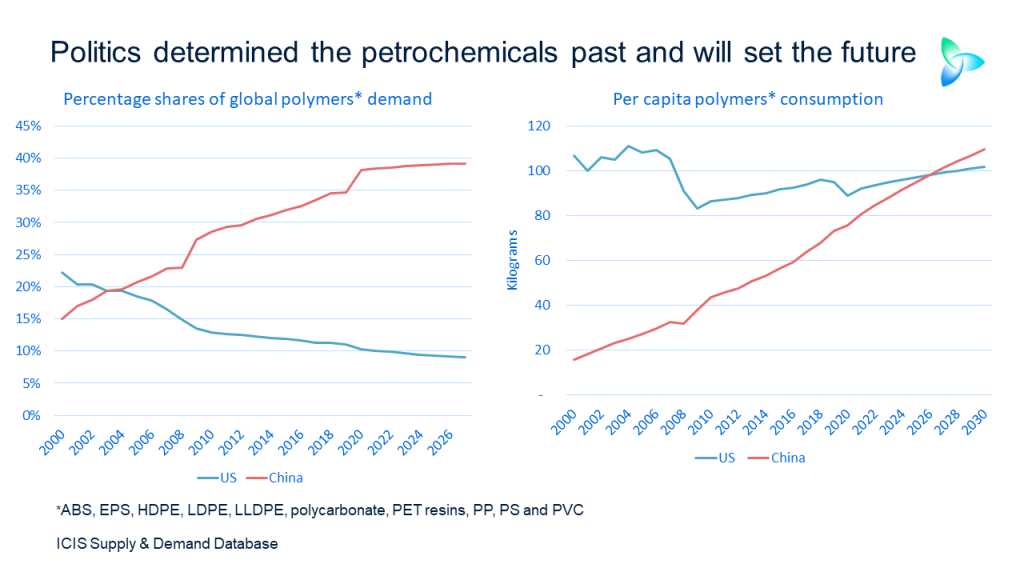 The rather dull and very short formal government communique that was released after the end of China’s 26-29 October Fifth Plenum should not lead you to conclude that nothing of great importance happened during this Chinese Communist Party meeting.

What you should instead still conclude, as I have been highlighting since September, is that this was the most important political meeting in China for a very long time, as it has set the headline direction for government economic policy over the next 15 years.

And even the brief government communique provided some significant signposts.

We know from the communique that China will attempt to close the yawning income gap that exists between the country’s urban and rural residents. As economic growth and personal wealth have soared in urban areas, particularly the big coastal cities, rural China has fallen further and further behind.

China’s ability to achieve this objective will have a major bearing on the future strength of the country’s petrochemicals demand growth in what is the world’s biggest market by far. No other country or region comes even close to China’s percentage shares of global demand across all the products.

We also know from the communique that China is going to focus more on domestic growth and perhaps a little less on exports, both during the 14th Five-Year Plan (2021-2025), and as indicated above, up until 2035 as well. The plenum stood out from previous plenums because it set policy direction for such a long period of time.

The details of how China plans to close the coastal-inland income gap and raise domestic consumption will emerge over the five months, ahead of next March’s National People’s Congress (NPC), when the government’s economic blueprint will be formally approved. The NPC is China’s annual parliamentary meeting.

But the official government statement on the plenum did give a tantalising hint on one means by which the above two objectives could be achieved. It was suggested that there would be “breakthrough” reforms of land-ownership rules.

The rules prevent individuals from buying and selling the land that they occupy because ownership technically resides with the government. This is said to have held back rural growth because of the practice by provincial governments of acquiring land from the nominal owners, with little or no compensation.

The other big takeaway from the plenum statement was, as expected, China’s greater focus on increased local production of high-technology components of finished goods.

What has added to China’s desire to achieve import independence in areas such as semi-conductors – while also becoming a world leader in new industries such as artificial intelligence and electric vehicles – is the long-term split between the US and China.

Divisions between the two superpowers will remain deep, regardless of who has won the presidential election (assuming we know the result of the election by the time you read this article), as the Democrats and Republicans broadly agree on their approach to China. They concur that China’s technological and military rise needs be contained, even though their approaches to these ends are very different.

I expect petrochemicals to remain a firm target for greater self-sufficiency over the next 15 years. Greater local supply security makes a lot of sense for China in a geopolitical environment made very uncertain by its split with the US.

And while it is hard to describe petrochemicals as high-technology components, the big new state-of-the-art refining-to-petrochemicals complexes that China has built, and will continue to build, certainly add a great deal of value to its manufacturing.

Adding value to manufacturing is crucial to China as it attempts to escape a middle-income trap made very deep by a rapidly ageing population.

So, you should expect China to move closer to self-sufficiency in polyethylene (PE) and mono-ethylene glycols) over the next 15 years. Imports seem likely to remain big, however.

But this will not be the case for paraxylene  polypropylene and styrene monomer , in my opinion. I expect China to achieve complete self-sufficiency in these products, as soon as over the next 3-5 years, from its position today of being the world’s biggest importer.

This is already the Chinese century

People casually talk, without looking at the data, about how this is going to be the Chinese century. But if you look at any set of data on any industry, from oil and gas through to petrochemicals and finished goods, it is obvious that this had already become China’s century at the expense of the US. Period:

The tipping points for each of these products, when China supplanted either the US or Europe as the world’s biggest consumer in tonnes amongst all the countries and regions, occurred between 2003 and 2009.

This remarkable turnaround does not reflect income levels as China is way behind the US and is likely to remain so for some considerable time.

What the numbers instead indicate is China’s dominance in exports of manufactured goods at the expense of the US. Many of the polymers that are either produced in China or shipped to China end up in exports of finished goods.

It might already be China’s century, but what of the future? Will the century remain Chinese, resulting in our base case for growth in Chinese polymers demand being realised? (again, see the above charts for our estimates of Chinese versus US shares of the global total, and comparative levels of per capita demand until 2030)

The outcomes heavily depend on the success of Chinese government policies in dealing with challenges very different from the challenges of the last 20 years.

China enjoyed favourable demographics that allowed to it to dominate just about every global manufacturing chain during 2000-2020. But this might not be the case in the future because of its ageing population. Will the government be able to gain control or the higher-value technologies it needs to escape the country’s middle-income trap?

Will China prevail over the US? I fear that it might be as binary as this; either China wins or loses with the results determining the strength of its future growth.

On exports again, despite a rapidly ageing population, China has some considerable time left. Its fantastic infrastructure and soft state loans (one of the reasons for its fallout with the US) mean that it can continue to dominate global exports for perhaps another 10 years.

Michael Pettis, professor of finance at Peking University’s Guanghua School of Management, wrote that China would have to transfer 10-15 percentage points of GDP from big businesses and the wealthy to the average citizen in order to successfully rebalance the economy towards local demand.

Here might be the Catch-22, though. Wage suppression is another reason why China still dominates global exports. If exports are raised by transferring 10-15 percentage points to workers, export competitiveness may collapse. Would the gains in local demand be greater than the loss of export sales? Maybe not.

This just scratches the surface of the complex range of new challenges that China faces, and so I shall return to these themes in later posts.

On briefly to the US. At the time of writing this post, the outcome of the US presidential election remained in the balance. Joe Biden looked the favourite to win, barring any legal challenges, with the votes that had already been counted suggesting the Senate would remain in Republican hands. The House looked likely to remain under Democrat control.

You will surely know more than me by the time you read this blog post as the US presidential, Senate and House elections will have moved closer to final outcomes.

What I worry will remain unchanged is a deeply divided America. This makes for a continuation of very fractured and erratic governance.

Will our base cases for US growth in per capita in polymers demand be realised? Will the US percentage shares of the global total be as we expect? (again, see the above charts).

The answer will again be largely found by assessing the effectiveness of US government policies. This is especially so in the pandemic world where the role of governments in Western economies has greatly increased.

But, whereas we all pore over every minutiae of US politics and the implications for our industry, nowhere close to enough effort is devoted to politics in China because Chinese politics can seem rather dull; witness the Fifth Plenum statement.

The Chinese political system is also rather opaque and there is the constant fear of a stepping over the line, given China is of course a one-party state. But, hey, we must try, and in my view, we need to try a lot harder.

How good is your understanding of the outcomes of the Fifth Plenum (did you even know it was taking place?) and how strong is your ability to monitor the details, implementation and effectiveness of Chinese government policy over the next 15 years? Unless you can answer “very good” to all the above, you are in a whole heap of strategic-planning trouble.

PREVIOUS POST Global polyethylene markets: What's happened in 2020 and an outlook for next year
NEXT POST China's booming polypropylene demand in 2020 and what could happen next year