Home Blogs Asian Chemical Connections China paraxylene imports may be just 6.6m tonnes in 2021 – 58% lower than only three years ago

China paraxylene imports may be just 6.6m tonnes in 2021 – 58% lower than only three years ago 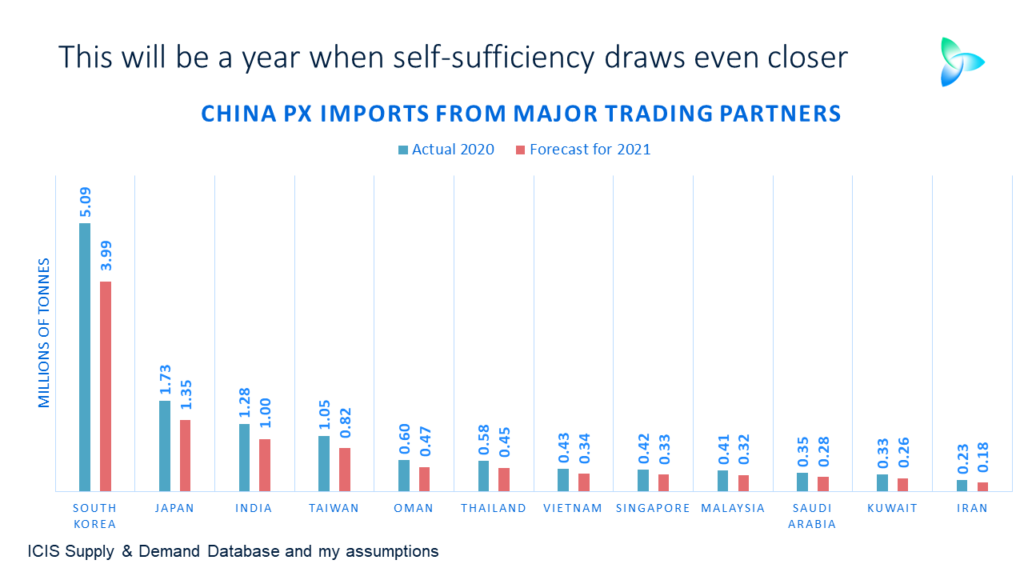 PLEASE DON’T say I didn’t tell you. Further big declines  in China’s paraxylene (PX) imports seem likely in. We could  also see less dramatic falls in polypropylene (PP) and styrene monomer (SM) imports this year, which I shall detail in later posts. But here a I shall focus on PX.  This year’s PX imports could fall to just 6.6m tonnes – 58% lower than imports the 15.9m tonnes of imports in 2018.

China could also reach complete self-sufficiency in PX by 2023, realising a government ambition that was first announced in 2014.

Seven years ago, many people were sceptical about China greatly increasing its petrochemicals self-sufficiency. But at the time I said – and have repeatedly cautioned in the intervening years – that China saw petrochemicals as a value-added industry that would help it move up the manufacturing value chain and thereby escape its middle-income trap. This type of overarching objective is way more important for China than standard cost-per-tonne economics at the petrochemical plant level.

The PX story specifically is also about fixing a problem left over from the stimulus pumped into the economy after 2008, as Beijing sought to mitigate the impact of the Global Financial Crisis. Bank lending in 2009 alone tripled compared with the previous year.

A lot of the extra money went into industrial capacity with factories quite often built to boost construction rather than with a clear view on long-term economics. It was all about the immediate economic multiplier effect of construction activity as China, quite understandably, scrambled to create new jobs and wealth to replace what was lost in the financial crisis.

A lot of additional purified terephthalic acid (PTA) capacity was built with perhaps insufficient thought given to where the feedstocks would come from. The shift in China’s PTA balances has been quite extraordinary. In 2009, China’s net PTA imports were 6.3m tonnes, but by 2015 net imports had fallen to just 128,293 tonnes. Last year, China swung into a net export position of 191,822 tonnes.

Meanwhile, because of limited feedstocks consideration, PX net imports increased. In 2009, net imports were at 3.7m tonnes. In 2018 they had reached an all-time high of 15.9m tonnes before slipping to 14.9m tonnes in 2019 and 8.4m tonnes last year.

This fall in PX imports was, as I said, the result of the government’s decision to fix the problem created by the big build-up in PTA capacity. Pivotal to the transition towards PX self-sufficiency was the decision to open up the refinery-PX sector to private investors such as Hengli Petrochemical. This added to the momentum of new investment.

New refineries, both private and state-owned, are heavily focused on providing feedstock for petrochemicals. “The main focus downstream is on PX self-sufficiency, but, in the process, investors thought ‘we might as well also add PP and styrene monomer plants downstream’,” an industry source told me five years ago.

Hengyi, a PTA producer, bought its stake in the joint venture to reduce its dependence on non-captive feedstock (the remaining equity is owned by the Brunei government). Most, if not all, the production from the complex is thus being exported to China, in effect making the plant a Chinese domestic facility.

As local capacity jumped by 40% in 2020, local production increased by no less than 55%, to 21.6m tonnes from 13.9m tonnes in 2019. I’ve included in these production numbers China’s imports from Brunei (the Brunei Hengyi Petrochemical plant came onstream in 2019).

Not surprisingly, as mentioned above, China’s net PX imports fell to 8.4m tonnes in 2020 from 14.9m tonnes in 2019, a decline of 43%. Note that I have again discounted imports from Brunei from these totals as the production in Brunei is in effect local.

But it could have been even worse. China’s polyester apparel and non-apparel markets did remarkably well last year, despite the pandemic. At first as the pandemic took hold, polyester demand slumped as the global textiles supply chain seized-up and shops in the West closed because of lockdowns. Fewer people were also buying office clothing and clothing for travel.

As global supply chains  returned to more or less normal from April onwards, clothing demand picked up. “The cash-rich middle classes in the West began to buy more sweatpants and T-shirts online, replacing the lost store front and office clothing demand,” said a friend of mine, who runs a clothing business in Leicester, the UK.

Further support to demand was provided in the non-apparel sector as cash-rich lockdowners bought lots of pillowcases, sheets, sofas, curtain material and carpets.

Despite all the talk about relocation of textiles manufacturing away from China because of its rising labour costs, the value of Chinese textile exports in 2019 totalled $120bn, the most of any country or region in the world. In distant second place was the EU at $66bn.

Where there was no interruption in demand – in fact instead demand strengthened as soon as the pandemic occurred and remained that way – was in the polyethylene terephthalate (PET) bottle-grade and PET film end-use sectors. Increased surface area demand, the result of people eating more at home and less in restaurants, buoyed consumption of PET mineral and carbonated drink bottles and PET films used in food packaging.

The end result was Chinese PX demand growth that I estimate at around 4% last year versus 2019. This compares with our original base case estimate of a 1% decline, which has since been revised upwards.

Let us assume that the 1% decline had happened. I have no doubt that China’s operating rates (including again Brunei) would still have been at 83% – the rate at which I think plants ran last year with demand growth at 4%.

Remember, assessing how many petrochemical plants are built and China and how they operate is not about standard cost-per-tonne economics. China would have run its PX plants just as hard in a negative growth environment for economic value-addition and import substitution reasons. At minus 1% demand growth, China’s net PX imports would have fallen to just 7.7m tonnes.

This indicates the problem for this year: demand growth will, I believe, be weaker as the China capacity surge continues. Let me explain the details.

Detailing the 2001 fall in imports

Let us from now on look at imports as opposed to net imports (imports minus exports). There are hardly any exports by China, but I used net imports earlier on to build a more accurate picture of demand. I am switching to imports to indicate the impact on China’s major PX trading partners in 2021.

Let me start with demand, however. I think growth will moderate from 4% last year to 2% this year.

China’s Q1 2021 petrochemicals demand growth will in general decelerate versus the fourth quarter of last year, I believe. This will be the result of new cases of the pandemic in China, local electricity shortages and the global container freight and semiconductor shortages.

For the polyester business, semiconductor availability is obviously not an issue, but the shortages of container freight space and the surge in container costs are problem as 90% of textiles are shipped in containers. A particular issue already being reported in Western markets is a shortage of home furnishings.

The experts say that the container-freight issue will not be resolved until Q2. But I do think that as Chinese economic and petrochemicals growth will slow a little quarter-on-quarter in Q1 2021, Beijing will launch a big domestic stimulus programme. Strong growth is politically important this year as 2021 marks the 100th anniversary of the founding of the Chinese Communist Party.

Nevertheless, I still see PX demand growth moderating to 2% in 2021 because of the Q1 slowdown in exports caused by the container-freight issue. A further negative is the likely arrival of peak Western demand for pillowcases, sheets and home furnishings, as these purchases are occasional.

Now let us finally look at would be the implications for China’s major PX trading partners, shown in the chart above. Assuming these trading partners gain the same percentage shares of the total China import market as they did in 2020:

You can see the effects on all the other major trading partners in descending order of market shares.

There is no Plan B for the global PX business because China completely dominates global demand and net imports. In 2020, we estimate that China accounted for 90% of global net PX imports among the countries and regions that are in net import positions. Yes, this is not a typo: 90%.

As I said at the beginning, this PX sea change has been on the way since 2014 and I see it as perfectly feasible that China will reach complete PX self-sufficiency by around 2025. Companies should therefore already have contingency plans in place.

This will inevitably mean closures of PX capacity outside China as the refineries immediately upstream of the PX plants also come under pressure from the decline in gasoline and diesel demand because of the electrification of road transport.

In general, the global petrochemicals industry, as I have also been long arguing, needs a new business model that is less reliant on China and more reliant on innovation and the four megatrends – sustainability, geopolitics, demographics, and, more recently, the pandemic. Companies can unlock immense value by adhering closely to these four megatrends.

PREVIOUS POST The new oil shocks: semiconductor supply shortages threaten the global economy
NEXT POST Why it is obvious few, in any, conventional steam crackers will start-up after 2030