Home Blogs Asian Chemical Connections Why it is obvious few, in any, conventional steam crackers will start-up after 2030

Why it is obvious few, in any, conventional steam crackers will start-up after 2030 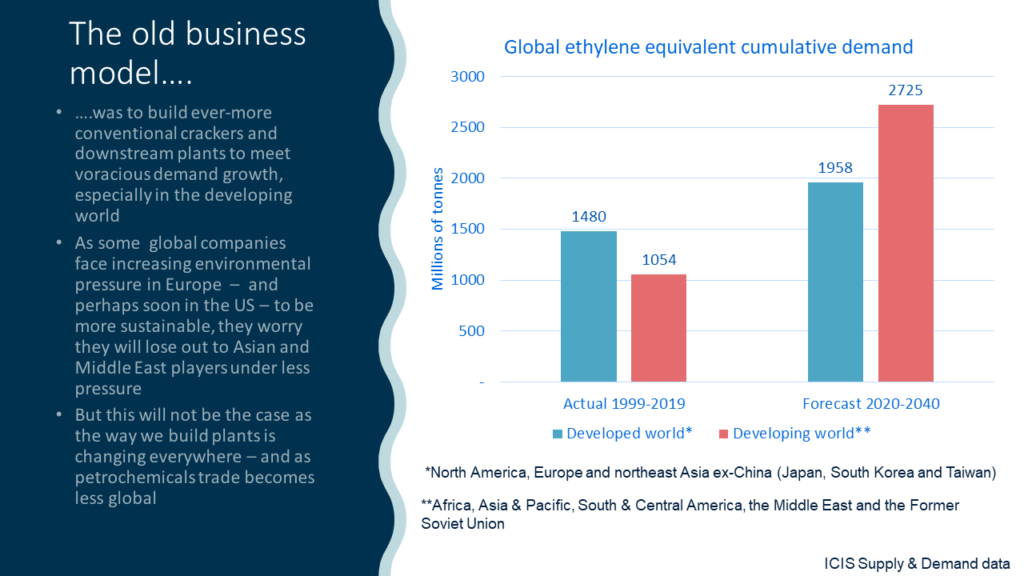 I SAID TO a contact earlier this week that it was remarkable that a senior executive at a petrochemicals company thought few, if any, conventionally built steam crackers would come online after 2030. His response was, “of course, that’s obvious”.  But from the perspective of some other industry executives, the future is not quite as straightforward as this.

They see it at as obvious that European environmental legislation is gathering pace. And if Joe Biden fully realises his green agenda, they believe the US could be heading in the same direction (this will be the subject of a future blog post).

But what they see as much less transparent is whether time is running out for building conventional steam crackers in the developing world. They worry that if they cannot build enough standard crackers, they will lose market share to Asian and Middle East players who will likely be under much less environmental pressure.

Petrochemicals has traditionally been a game of building ever-larger crackers and downstream capacity to serve ever-greater demand, and the biggest potential for future growth is in the developing world. Let us, as always, look at the data to justify this view, in this case using ethylene equivalent demand as an example. Ethylene equivalent demand is ethylene consumption into all the downstream derivatives:

The monster developing country in this mix is of course China. China was responsible for 17% of global ethylene growth in 1999-2019, which is forecast to rise to 30% in 2020-2040. Volume-wise, China’s increase is estimated to be from 11% to 22%. By both measures, China will become the biggest of the countries and regions in the world. China’s dominance in some of the ethylene derivatives, including polyethylene (PE) and ethylene glycols, will be even greater.

The case for “obviously”

Why I feel it is obviously the case that few, if any, conventional steam crackers will start-up after 2030 relates to the global consensus on human-made climate change. Moving downstream into PE and other polymers, there is also a global consensus on the need to tackle the plastic-rubbish crisis.

The requirement for big, grassroots crackers will diminish over the next 20 years because of the shift to mechanical and chemicals recycling. The primary feedstocks for making polymers will shift from ethylene and propylene to plastic waste. “Top-up” quantities of naphtha will still, however, be required for existing crackers, and maybe some smaller new plants. This naphtha will be provided by chemicals-recycling facilities.

Let me include a mea culpa here. In an earlier post, I said that it was necessary to solve both the CO2 and plastics rubbish crisis together. This was obviously correct. But I questioned whether chemicals recycling was the right solution given its CO2 intensity. I was probably wrong to even suggest this as a big issue.

Think of the life cycle of a typical plastic pellet. Oil and gas are dug out of the ground, refined, turned into ethylene and then, say PE. Oil, gas, naphtha, PE and other polymers are often shipped around the world. Compare this to a chemicals recycling plant where the feedstock and final end-use products are all local.

The chart was from the landmark study, Sustainable Plastics Strategy, which was released in December. The strategy was drawn up by the major European plastics associations, Cefic (the European Chemical Industry Council), PlasticsEurope, the European Plastics Converters and the European Composites, Plastics and Polymer Processing Platform.

Note some of the wording of the strategy, indicating the direction of travel in Europe: Plastic waste is ending up in the environment. Unmanaged, it is amongst the greatest global environmental challenges of our time. As an industry, we believe plastic waste in the environment is unacceptable and represents a massive loss of a valuable resource.

And, as I said earlier, there’s a global consensus on the need to resolve the plastics rubbish crisis. China has promised to become carbon neutral before 2060 as it restricts consumption of single-use plastics and contemplates major investments in a modern recycling industry. Many other developing countries have introduced legislation against single-use plastics.

Let us again consider the comment about few, if any, conventionally built crackers coming on stream after 2030.

Assuming some big grassroots crackers still go ahead, the global push towards carbon neutrality will, I believe, lead to increasing use of electric furnaces rather than their hydrocarbon-powered alternatives. Electric furnaces will be a positive contribution to the carbon battle if they are powered by renewable energy. Green hydrogen, produced via electrolysis that is again powered by renewable energy, will also be an important part of the CO2 struggle in refinery and petrochemical projects.

These same types of technologies will be retrofitted to existing refineries and petrochemical plants.

Also consider China’s existential need to escape its middle-income trap. I know I keep mentioning this, but this is such an important issue that far too many people continue to overlook.

A route  up the manufacturing value chain and out of China’s middle-income trap is through green innovation including, I am sure, more carbon-efficient refinery and petrochemical processes. The scale of government funding for green innovation has been, and will continue to be, huge.

Further, by walking the talk and reducing carbon, China will gain geopolitical influence. Under the Trump administration, China had pretty much an open field to gain influence in the environmental space, thereby gaining leverage over its rival for Superpower influence. But Biden’s climate policies will create a more competitive landscape, resulting in China redoubling its efforts to demonstrate global leadership.

The old way of looking at the petrochemicals world also assumes that trade flows will remain highly globalised. But I believe we will continue to head towards a bipolar world of two trading and geopolitical blocs, one led by the US and the other by China, because the Biden White House will maintain the policy of trying to contain China’s access to higher-value technologies (I will revisit this theme in a later post).

Moving conventionally made petrochemicals across long distances will also, I believe, become increasingly unviable because of the introduction of further carbon taxes and carbon credits. Drilling ethane out of the ground in, say, the US and turning it into PE pellets for export all the way to Asia & Pacific and China will become harder to justify economically, because of increasing costs levied on the production of carbon.

And last and certainly not least, the feedstocks to make petrochemicals in the conventional way will become less and less available as refineries shut down. Refineries are being forced to shut down because of the electrification of road transport, which, I think, will move a lot faster than conventional thinking suggests.

None of this will be easy and let me apologise in advance if the use of the word “obviously” comes across as insensitive. This is not my intention as I realise that making this transition will raise many challenges. But I sincerely that the future is as straightforward as I have argued above.

How we get to a sustainable future is largely unknown and therein lies the opportunity for all the brilliant chemists and engineers. Some of the processes and technologies that will get us there have probably not even been invented, never mind commercialised. This provides a huge potential to make money from innovation.

As Paul Hodges concluded in the same blog post I have linked to above: The time for small-scale experiments is now past. We have to start investing the hundreds of millions of dollars that are needed to create the circular economy of the future and preserve the plastics industry’s key role on the global economy.

PREVIOUS POST China paraxylene imports may be just 6.6m tonnes in 2021 - 58% lower than only three years ago
NEXT POST Global PP demand to remain resilient in 2021 even if we fail to control the pandemic